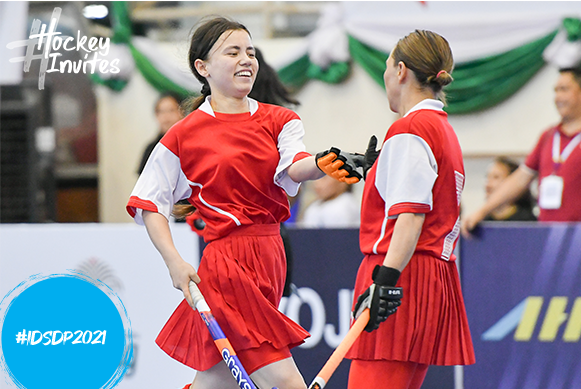 Using hockey as a vehicle for change

While much of the hockey world has been forced to stand still due to the Covid pandemic, behind the scenes, groups, individuals and organisations have been grappling with ways to keep educating and developing our hockey community.

It is that dynamic approach that makes the hockey community such a progressive group of people. Whether we are looking at the ambition and drive of the Uzbekistan Hockey Federation in Asia, an ability to overcome difficulty in Africa, partnership working in Oceania, a desire to reach out to all corners in Pan America or the creative use of technology for education at the European Hockey Federation, dynamic action and creative thought have been key facets in recent months.

As we celebrate the International Day of Sport for Development and Peace with our five continental federations, we take a look at what has been going on in each geographical area of the hockey community. In all cases, the work that has been carried out has contributed to developing and educating through the medium of hockey.

The dynamic nature of those working within the sport has been recognised by European Hockey Federation President, Marijke Fleuren. She said “One of the values of the EHF that we hold dear is being dynamic. Well, that value was tested to its limit one year ago when we knew that many development initiates would no longer be possible in our traditional format!”

“So within a couple of weeks, we went ‘online’”

“To be honest there wasn’t one initiative that stood out, but what has impressed me the most was how the whole team (staff and volunteers) immediately formed one team to make the very most of the new situation and how this blended learning approach is now a core element of our development strategies going forward.”

Among the initiatives that have been delivered over the past year are the EHF podcast, which provides educational content and insight and engagement through interviews with some of the sport’s biggest stars. In these times of isolation, providing a continuous link to the spot has been crucial and the EHF podcast delivers on this in abundance.

When it came to developing and education those working within the sport, EHF embraced the online culture. Not only were relevant and progressive online courses on coaching, umpiring and officiating delivered to a huge number of people, but educators and course developers were able to do deep dives into things such as culture, and tactical understanding - areas in which it hadn’t always been possible to delve when the courses were face-to-face and active.

The long-term goal of the EHF is to create an education framework – supported by a grant from the EU and in partnership with a number of European hockey organisations – that will create tools and resources to provide accessible learning for people at all levels of the sport.

Accessibility has been at the heart of the PAHF’s activity in the past 12 months. More than 3,500 participants from across the Pan Am member nations have had access to one or more online course.

A wide range of webinars, workshops, courses and Open Space events (where invited people talk about selected issues within the sport), were made available, with many provided for free.

With the two main languages of the region being Spanish and English, the courses were available in both, and to increase access, most webinars have also been posted on YouTube.

In addition, some tailored webinars were provided for national associations who applied for support from the continental federation. A giant step forward in increasing inclusivity has been taken with the provision of two webinars aimed at promoting activities and opening up a conversation about Hockey ID.

Opportunities to play hockey might have been non-existent, but the Uzbekistan Hockey Federation, working with the Asian Hockey Federation (AHF), has ploughed on with its plans to improve facilities and attract many more participants of all levels to the sport.

A brand new hockey pitch in Andijan, with a completely renovated stadium is central to the Uzbekistan Hockey Federation’s aspirations.

The new stadium, which was installed by the AHF, will be home to the Women’s AHF Cup and the men’s Central Asia Cup later this year. Three years later and the stadium will be home to the hockey competition within the Youth Asian Games Tashkent 2025. The AHF plans for the stadium to become a hub for Central Asian Activities, such as domestic and international events, training camps and development activities.

To promote the game further, Uzbekistan has embraced Hockey5s, with many Hockey5s activities taking place throughout the country, as well as a number of specific development activities for coaches, umpires, officials and managers.

AHF Chief Executive Tayyab Ikram said: “I am extremely pleased to see the remarkable achievements made in Uzbekistan even despite the huge setbacks put forward by the global pandemic. It is indeed an inspiring story and of hope when one is desperately required. Uzbekistan is a very important stakeholder for the Asian Hockey Federation, and we wish to keep on working collectively to achieve the set objectives.”

Cameroon is a country beset by financial and cultural challenges. Despite this, the Cameroon Hockey Association has managed to deliver on its promise to create and run a national indoor hockey league.

Supported by the African hockey Federation and driven forwards by Jean Serge Enanak Ofakem, the President of the Cameroon Hockey Association, the new league launched with seven clubs representing five regions of the country.

The launch of the league is part of a 10-year development plan. Due to financial problems, the league launched two years later than first planned but, since it sprang into action in December 2020 it has been well-received. The opening match, at the Complexe Sportif Beac, in Yaounde, was between two clubs from the Central Region – INJS HC and ELCOM HC. It was not short on goal action - the final score was 19-14 to INJS.

Mbarga says there are plans to launch a corresponding outdoor league in 2023.

The final continental story comes from the Oceania Hockey Federation (OHF), where as reported earlier this year, the OHF has been working with a range of partners to develop and educate communities in Papua New Guinea and Vanuatu.

The Hookin4Health project aims to improve the life chances of two particular groups – females and people with disabilities – by removing barriers and increasing their accessibility to sport and physical activity.

OHF, Hockey Australia, the Australian Government’s Team Up programme, plus health professionals and Finders University are all contributing to the initiative, which will not only teach valuable life skills such as leadership, decision-making and skill acquisition, but will also address issues such as nutrition, healthy living and sexual health.

OHF President Clare Prideaux says: “Hookin4Health will create new opportunities for women and people with disabilities in coaching, officiating and leadership roles. Ways of working and a culture of safety, equity and inclusion will be promoted by hockey coaches, officials and leaders who will themselves be trained to better understand safety, healthy relationships, gender equity and inclusive practices.”

As the hockey community comes together to celebrate International Day of Sport for Development and Peace, it is heartening to see how each and every continental federation is working so hard, often in challenging conditions, to promote personal development and inclusivity through the medium of hockey.