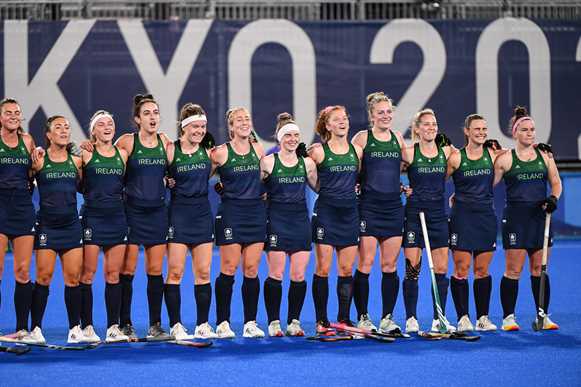 It all comes down to one prized qualification place for the winning women’s and two qualification places for the men’s teams at the FIH Hockey Women’s World Cup 2022 – European Qualifier 2021 and the FIH Hockey Men’s World Cup 2023 - European Qualifier 2021. Taking place from 21-24 October in Pisa, Italy and Cardiff, Wales respectively, the teams that triumph will be taking part in the respective women and men’s World Cups in Spain/Netherlands (2022) and India (2023). For the women, there is one place up for grabs, while the two finalists in the men’s competition will earn the right to compete at Bhubaneswar in 2023.

For the women’s competition Ireland, Italy, Scotland, Russia, Belarus, Poland, Wales and France will be vying for top spot. In the men’s event, France, Wales, Russia, Ireland, Scotland, Austria, Italy and Poland will be doing battle.

Adding to the tension of two events that has so much at stake, is the fact that every round is a knock-out. This makes the seedings in the event highly important. The seedings will be based on the FIH World Rankings. This means Ireland are the top ranked women’s team, with hosts Italy in second place and Scotland third, while in the men’s competition, France are the top ranked side, followed by Ireland and Wales.

The all important first set of matches in the women’s competition sees Russia face Belarus in a match that is certain to be hugely competitive. Ranked fourth and fifth respectively in this competition, there is little to separate the teams, who are also ranked 20th and 21st in the FIH World Rankings. On their most recent meet-up, Russia triumphed 5-0, so the momentum is with the higher ranked side. While Russia will look to their experienced captain Bogdana Sadovaia to lead the way, Belarus have a number of players who can step up for the big occasion, notably Ryta Batura and Krestsina Papkova.

Top seed Ireland face eighth seed France in the second quarter final. With a World Cup silver medal in 2018, plus all the experience of playing at the Olympic Games Tokyo 2020, Ireland will be favourites to progress. That said, Ireland have six debutants in their squad, but they also have the experience of captain Katie Mullan and the dependability of goalkeeper Ayeisha McFerran. The French can never be written off however, particularly as the team will have an eye to Paris 2024 and will want to show how competitive they can be in top flight hockey. Captain Emma Ponthieu will be hoping to lead her team to a surprise win over their higher ranked rivals.

It will be a close match in the third quarter final as Scotland face Poland. The Scots have recent history on their side, with a 3-0 win in 2019 at the EuroHockey Championship in 2019, but Poland, led by captain Marlena Rybacha, are a nation that likes to punch above their weight and a place at the World Cup is an irresistible motivation. Fresh from winning a bronze medal at the Olympic Games Tokyo 2020, Scotland will be looking for inspiration from Sarah Robertson, a feisty and skilful forward.

If the third quarter-final will be a close-run encounter then the fourth one is likely to be separated by the thinnest of margins. Wales have met Italy 12 times in the past seven years with Italy winning six games but four of the matches being drawn. Italy will have home advantage, plus the depth of experience offered by players such as Chiara Tiddi and Celina Traverso, but Wales can counter through its Olympic duo of Leah Wilkinson and Sarah Jones.

France will be hoping to get their campaign off to a flying start as they face the bottom seed Poland in the opening quarter-final match. This will be Head Coach Frederique Soyez’s first major challenge since moving to France from the Spanish men’s national team. He has a number of players within the squad who will relish the challenge, notably Simon Martin Brisac, Gaspard Baumgarten and captain Victor Charlet. Poland’s Head Coach Dariiusz Rachwalski knows his men have a steep challenge but Poland are a resilient team who will be hard to break down.

Austria will need to contain the goal-scoring instincts of Alan Forsyth and hope their own goal machine Michael Korper is at his clinical best. Benjamin Stanzl is likely to be an influential figure in a match that is hard to call. The teams are ranked fourth and fifth for this tournament and only one ranking place separates them in the FIH World Rankings.

When Ireland face Russia they will be looking to secure a second consecutive appearance at the FIH Hockey Men’s World Cup in Bhubaneswar. The Green Army were disappointed to miss out on the Olympic Games Tokyo 2020 and will be looking to re-establish themselves as one of the top teams in the game. There are however, a lot of new players and Russia will hope to hit the higher ranked team hard with their own obdurate style of displaced defence and well-worked attacking moves.

The fourth quarter-final is a replica of the women’s event, with Wales facing Italy. Wales will be the favourites to win, particularly with the Olympic pairing of Jacob Draper and Rupert Shipperley in the ranks. Italy, however, have their own star players. Francesco Padovani in goal is a force to be reckoned with, while Thomas Keenan is a strong attacking player and captain Agustin Nunez is an energetic and skilful leader.

In both competitions, following these matches, the winning teams will have a rest day on Friday 22 and meet in the semi-finals on Saturday 23 October. Losing teams at each stage will play ranking matches. The finals will take place on Sunday 24 October at 16:30 (CET) in Pisa and 17:00 (CET) in Cardiff.