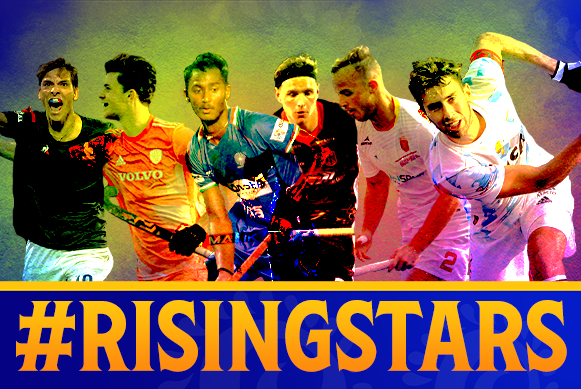 The India men’s hockey team that won bronze at the Olympic Games Tokyo 2020 contained eight of the team that participated in – and won – the 2016 Junior World Cup.

Christopher Ruhr was a member of the triumphant German team of 2013. He was top scorer then and he hasn’t stopped scoring crucial goals for his country ever since.

Both Alexander Hendrickx and Gonzalo Peillat began to hone their unstoppable penalty corner routines at the same 2013 Junior World Cup.

Blake Govers (AUS), Thierry Brinkman (NED) and Victor Wegnez (BEL) all came to prominence in 2016. Travel back in time to 2009 and Mink van der Weerden and Florian Fuchs were dominating proceedings.

When Argentina last won the title – in 2005 – Lucas Vila and Pedro Ibarra were the goal scorers against Australia. 11 years later and both men were wearing Olympic gold medals as they won the Olympic Games Rio 2016.

So, who will emerge as an international star from this edition of the FIH Odisha Hockey Men's Junior World Cup Bhubaneswar 2021?

Many players caught the eye at various stages of the competition, but for sheer consistently high – in some cases match-changing – performances, the following six athletes rose to the top of the 2021 crop of star players.

Spain took seventh place after they defeated Malaysia 4-1. At the heart of the Spanish side as always was Eduard De Ignacio-Simo.

Alert to an opportunity, intelligent in his movement and nimble in front of goal, De Ignacio-Simo scored a total of six goals for his team, including a hat trick in Spain’s opening 17-0 win over USA and the opening goal in the final match against Malaysia.

Probably the most exciting and ultimately frustrating moment was when De Ignacio-Simo thought he had scored the winner in the 59th minute of the quarter-final match against Germany, only to see the German team score an equaliser just seconds later.

In a tournament that yielded record numbers of goals, one name stands out above all others. Miles Bukkens of the Netherlands has proven himself the master of turning an opportunity into a goal. The Dutch forward scored a total of 18 goals, 10 from open play and eight penalty corners, earning himself the Hero Top Goal Scorer title. Whether a poacher’s goal nicked from under the goalkeeper or a fierce shot from the top of the circle, the Netherlands have found themselves another goalscoring maestro.

Timothée Clément captained France to a third-place finish, displaying a maturity that set him apart as a leader as well as a crucial cog in the French team. His goals – 14 in total – came at the most important moments. A hat trick against India in the opening match showed the intent of the European team; a further hat trick against Malaysia took France into the semi-finals and then, his three goals in the final match secured the bronze medal for France as they once again beat the host nation in Bhubaneswar. Sealing an excellent performance for Clément, he was awarded the Best Player of the Tournament award.

Overall, India will be disappointed that they were not able to defend their 2016 title but there were some individual performances that signal a continuing bright future for the national team. One of these players is the dynamic and creative force that is Vishnukant Singh. The athlete played a crucial role as an anchor in the centre of the pitch and, time and again, it was his vision and movement that launched India scoring opportunities.

For Hannes Müller, it was a case of falling at the final hurdle but the German captain must be proud of the way his team progressed to the final. Stepping in as captain following an injury to Benedikt Schwarzhaupt, Müller proved himself an inspirational leader and his influence on the team could be seen across the competition.

While Lautaro Domene and Nehuen Hernando will take the plaudits for the final victory, with Domene scoring three goals and Hernando making some brilliant saves, the consistent driving force in the Argentina team has been Facundo Zarate.

The captain set the standard in the opening match when he scored three goals against Egypt and, from that match on, he was to be seen bustling through midfield, cajoling his teammates to higher efforts and imposing his own energy on those around him. Zarate is a worthy player to follow in the footsteps of Lucas Vila, who lifted the trophy for Argentina in 2005.

For all these athletes, and the many others who graced the international hockey stage in Bhubaneswar, this is the start of a thrilling journey as an elite athlete and they will look back with pride and pleasure at how it all began.