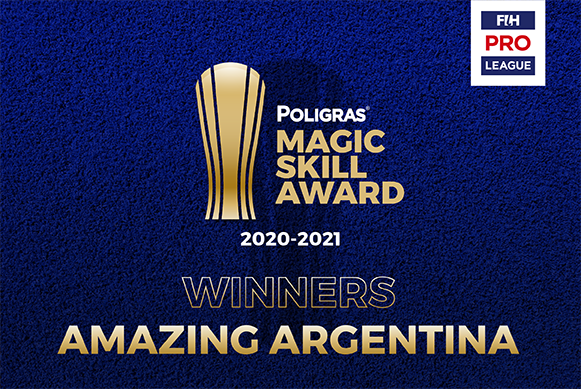 As we approach the start of Season 3 of the FIH Hockey Pro League, we are delighted to reveal the winner of the Poligras Magic Skill Award for the 2020-21 Season, as voted for by hockey fans the world over.

Throughout the past few weeks, fans have voted to pick a moment that really captured the magic of our sport in this brand-new award, presented by FIH Global Supplier Polytan. The shortlist for the Poligras Magic Skill Award featured six wonderful flashes of brilliance that graced the turf during the extended 2020-21 edition of the competition, ranging from Olivia Merry’s stunning four-goal haul for New Zealand women against Argentina to India men scoring one of the fastest goals in the history of the sport in their FIH Hockey Pro League debut match against the Netherlands.

However, there could be only one winner, with the first Poligras Magic Skill Award going to Argentina women’s stunning 2-0 triumph over the Netherlands, then holders of the World, European and FIH Hockey Pro League titles, in Buenos Aires.

The hugely memorable, highly entertaining clash – in which Agustina Gorzelany and Delfina Merino scored the goals in front of a sell-out crowd in Buenos Aires – was the clear winner, taking over half of the valid votes cast, which allowed fans to choose their top three from the shortlist of six selected by FIH.

The success in the Poligras Magic Skill Award is the latest accolade for Las Leonas, following a second placed finish in the FIH Hockey Pro League 2020-21 and a silver medal at the recent Olympic Games Tokyo 2020.

The six shortlisted moments can be found below.

GURJANT’S GOAL IS FAST AND FANTASTIC


India make FIH Hockey Pro League debut with Gurjant Singh scoring one of the fastest goals in the history of the sport against the Netherlands.


Constantin Staib's outrageous goal for Germany against Argentina, firing between his own legs after a brilliant passing move.

Huge congratulations to Argentina on their success, and thanks to all fans for voting!

Want to know more about Polytan and Poligras?