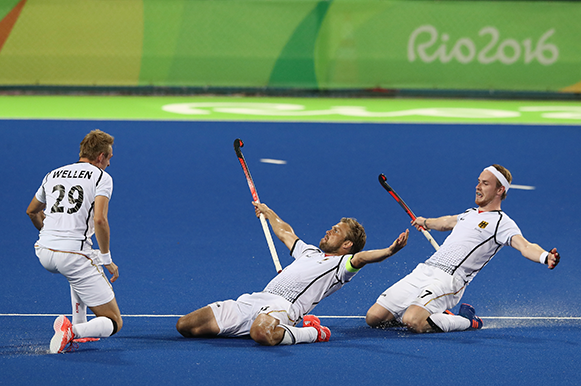 In the quarter-finals of the men’s competition at the Olympic Games Rio 2016, Germany produced one of the greatest comebacks in the history of Olympic hockey.

A first-place finish in Pool B for Germany set up a meeting with New Zealand, who had completed their Pool A campaign in fourth position. As not only the pool winners but also the reigning Olympic champions from Beijing 2008 and London 2012, Die Honamas started the contest as heavy favourites. However, the Black Sticks had other ideas, and proceeded to throw the form book out of the window.

New Zealand edged ahead thanks to an 18th minute goal from Hugo Inglis before taking a stranglehold on the game with 11 minutes remaining, as Shea McAleese – a man who spent many happy years competing in Germany’s Bundesliga – made the score 2-0 with a penalty corner.

The writing looked to be on the wall for Die Honamas, with the reigning champions facing a elimination which would end any hopes of a fourth consecutive Olympic medal, having also claimed bronze at Athens 2004.

For Germany captain Moritz Fürste, who was competing in his third and final Olympic competition, the dreams of a fairy tale finish to a majestic international career in which he had won every major prize in the sport were fading fast, and he knew it.

“I was just saying to myself, ‘this cannot be the end of my career’”, said the double Olympic gold medallist, remembering a brief spell on the side-lines after being benched in the latter stages of the game. “‘It cannot be over now, that is impossible. This is not how the story is supposed to end.’”

With elimination from Rio 2016 staring Germany squarely in the eyes, head coach Valentin Altenburg went for broke, bringing on an outfield player in place of the goalkeeper to overload their fiercely resilient opponents.

Eventually, the breakthrough came, with Fürste – back on the field after his brief substitution - giving his team a glimmer of hope with a perfectly despatched penalty corner drag-flick with just four minutes remaining. It was a crucial moment, but Germany still needed another goal if they were to keep their Olympic hopes alive, and time was rapidly running out.

After further German penalty corner chances came and went, the match entered its final 60 seconds. A powerful slap into the circle from Fürste came up off a New Zealand stick and into one of their own players, giving the Europeans one last penalty corner opportunity to pull themselves level. Ever the man for the big occassion, Fürste stepped up to score his second goal in four minutes, sending a drag-flick to the right of Black Sticks goalkeeper Devon Manchester to tie the scores with just 40 seconds remaining.

The leveller triggered scenes of unbridled joy from Germany players and staff, but remarkably, the best was still to come. With 12 seconds remaining, Germany stole possession and headed forward, with Timur Oruz powering down the right before firing across the face of the New Zealand goal, where supreme goal-poacher Florian Fuchs touched home the most incredible of winning goals with just two seconds left to play.

“[When] we got it to 2-2, we were all preparing for the shoot-out”, said Fürste, who would go on to win bronze with the team in Rio. “Even our coach [Valentin Altenburg], I don’t know if you remember the scene on the highlights, but he is already writing down names on his clipboard. He wasn’t even watching; he didn’t see the goal!”

It was the most dramatic of endings, one that triggered huge contrasts of emotions within the respective teams. For Germany, it was utter elation, having rescued themselves from what looked like certain defeat. For New Zealand, it was understandable despair, having come so close to eliminating the mighty Germany from the competition. For the neutral, it was simply the perfect example of why hockey continues to be one of the most exhilarating sports on the planet.

As well as the above interview and highlight clips, a full replay of the game can be found on the Olympic Channel by clicking here.