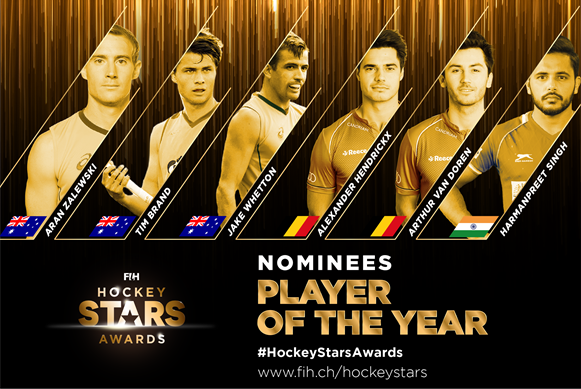 With all six of the nominees having stood on the podium at the recent Olympic Games Tokyo 2020, there is a real Olympic flavour to the FIH Hockey Stars Men’s Player of the Year Award for 2020-21. As well as excelling in Japan, the six players also made significant contributions in the 2020-21 edition of the FIH Hockey Pro League.

At 22, live-wire Australia attacker Tim Brand is the youngest of the nominees, but his sensational performances in the 2020-2021 FIH Hockey Pro League and at the Olympic Games Tokyo 2020 more than justify his inclusion. Brand was in electrifying form for the Kookaburras at the showpiece event in Japan, proving too hot to handle for most defenders as he scored five times – all from open play – as well as carving out countless scoring opportunities for his team-mates. Brand is already a superstar, and there is so much more to come from this hugely gifted athlete.

Widely regarded as one of the finest players of his generation, Belgium defender Arthur van Doren was at his scintillating best at Tokyo 2020, playing a central role as the Red Lions claimed their first ever Olympic gold medal. Van Doren’s flawless skillset, perfect positional play and visionary passing were on display for all to see in Tokyo, even managing to mark his 200th international appearance by getting on the scoresheet. Van Doren also played a key role in helping Belgium win the disrupted 2020-21 FIH Hockey Pro League. The 2017 and 2018 FIH Player of the Year will be looking to complete his hat-trick, and few would bet against this remarkable player doing just that.

Alexander Hendrickx’s stock has been rising rapidly in recent years, with the powerfully built, tough tacking Belgian defender showing his class at the back whilst also making a significant contribution at the other end of the field. Hendrickx – who was the top scorer in the 2020-21 FIH Hockey Pro League – showed exactly why he is rated as the world’s finest exponent of the penalty corner drag-flick with a ruthless display at the Olympic Games Tokyo 2020, scoring 14 times (12 penalty corners / 2 penalty strokes) in eight matches – including three hat-tricks – to guide the Red Lions to a glorious gold medal the day before his 28th birthday.

Few can argue with the fact that Harmanpreet Singh played a substantial role in helping India’s men claim their first Olympic medal since Moscow 1980. The defender – who started all of India’s matches in their impressive debut season in the 2020-21 FIH Hockey Pro League season, scoring four times in his team’s final three matches in that competition – was consistently brilliant at the back for India, making fine tackles and showing magnificent distribution to help his team hit opponents with rapid counterattacks. In addition to being a world class defender, he be also blessed with a killer penalty corner drag-flick which he used to great effect throughout India’s bronze medal winning campaign at Tokyo 2020. Harmanpreet scored six times at the showpiece event in Japan, one of which came in the remarkable 5-4 victory over Germany in the bronze medal match.

Having spent most of his Kookaburras career as a highly effective attacker, Jake Whetton has been deployed in midfield in recent years. That decision by Australian head coach Colin Batch has been a masterstroke, using Whetton’s tireless energy, creativity, pace and link-up play to devastating effect both in the FIH Hockey Pro League and at Tokyo 2020. His performances in Tokyo were exceptional, with the 30-year-old producing arguably the best form of his fine career as Australia reached their first Olympic final since Athens 2004. Whetton is a rare talent who is very much at the peak of his powers.

Australia’s co-captain alongside the great Eddie Ockenden, Aran Zalewski was the driving force behind Australia’s superb silver medal-winning Olympic campaign at Tokyo 2020. A central midfielder with great discipline and near-perfect positional play, Zalewski is a crucial component in the Kookaburras set-up, with his endless running, superb tackling and distribution being on display for all to see not just in Tokyo but also in the heavily disrupted 2020-21 FIH Hockey Pro League season. Zalewski – who made his 200th international appearance in Australia’s 3-1 Olympic semi-final victory against Germany – is a towering, influential presence who, quite simply, makes Australia tick.