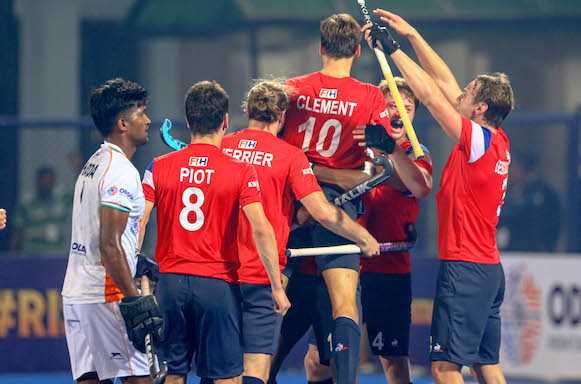 2016 Junior World Cup silver medallists Belgium made the perfect start to their competition by claiming a 5-1 victory over South Africa in the opening match of the day. Roman Duvekot put Belgium into the lead seven minutes into the contest from a penalty corner, but South Africa hit back with a PC of their own when Jaques van Tonder netted on the stroke of quarter time. Nelson Onana restored Belgium’s lead with a second quarter field goal before the Europeans kicked on after half time. Duvakot, who was named Player of the Match, claimed a second goal from open play before strikes from Arnon van Dessel and Rik van Cleynenbreugel wrapped up all three points.

It’s a nice way to start the tournament”, said Belgium’s Roman Duvekot. “We’re quite happy. Hopefully we’ll keep growing in the tournament. It’s always important to start with a win. It brings us confidence. I hope we’ll keep getting better. Now, we will take a bit of rest, recover and have a good sleep!”

Six times Junior World Cup champions Germany cruised to a 5-2 victory over Pakistan in their opening fixture, with Robert Duckscheer scoring twice to be named Player of the Match. Germany had the ball in the Pakistan net inside the opening sixty seconds when Michel Struthoff’s strike deflected into the goal via a Green Shirts stick before Duckscheer added a second field goal just before the end of the first quarter. Pakistan hit back through Abdul Shahid early in the second quarter, but Maximilian Siegberg and Benedikt Schwarzhaupt took the score to 4-1 before Germany goalkeeper Anton Brinckman saved a penalty stroke ahead of the half time break. Muhammad Hammadudin gave Pakistan hope when he found the net with 11 minutes left to play, but Duckscheer’s emphatic second of the match put the result beyond all doubt.

“We started very well in the first half”, said Germany’s Duckscheer. “I think the third quarter was a little bit up and down from our side. We were one man down during 10 minutes in this third quarter, so it was tough with these weather conditions. But overall, I’m very happy with the performance of my team. It was a good first match. Although we don’t know much about [upcomign opponents] Argentina until now, I think it is a very good team. Like the Pakistani players, they are technical, very fast and good in the attack. So, we have to defend well again, and our chances are good, I think.”

Poland claimed a narrow triumph over Canada in the third match of the day, giving the Europeans a wonderful platform to build on as they attempt to reach the competition quarter-finals. The only goal of the game came from the stick of Eryk Bembenek, who slapped home a penalty corner from the top of the circle in the 34th minute. It proved to be enough for the Poles to claim all three points, although Canada missed a glorious chance to get on the score-sheet through a penalty stroke just before half time, with Roopkanwar Dhillon’s powerful flick hitting the left post rather than the back of the net.

“We are very happy”, said Poland’s Jakub Chumeńczuk, the Player of the Match, after the contest. “We did everything we could and left a lot of heart on the pitch. It’s a good performance. I believe we controlled the whole game. Canada created a few scoring opportunities and even hit the goal post but we defended well and it paid off. Against [upcoming opponents] France, we will give everything we can to try to win and fight for the three points.”

Two brilliant penalty corner goals in the third quarter helped Malaysia overcome a strong challenge from Pan American champions Chile, with the team from Asia emerging 2-1 winners. Both penalty corner routines were perfectly executed, with Kamarulzaman Kamaruddin smashing home the opening goal in the 34th minute before Syarman Mat’s superb, angled deflection in the 43rd minute established what proved to be an unassailable lead. Sebastian Wolansky’s fine backhand strike from a penalty corner gave Chile a glimmer of hope, but it was Malaysia who deservedly took all three points from the contest.

“First, we are very happy because we won the match”, said Malaysia’s Amirul Azahar, the Player of the Match. “We have two matches ahead, so we must first recover and then have a good video session to prepare for the next match [against Belgium]. We have a lot of respect for Belgium because they were runners-up of the last Junior World Cup. We must study their game carefully.”

A Player of the Match performance from France captain Timothée Clément gave his team a sensational victory over title holders and hosts India, edging a nine-goal thriller. Clément and Benjamin Marque established a 2-0 lead inside the opening seven minutes, with India restoring parity through Uttam Singh and Sanjay before the end of a pulsating first quarter. Penalty corner goals either side of half time earned Clément a hat-trick and took the score to 4-2 before he produced a stunning stick save on his own goal-line from an India penalty corner. Corentin Sellier’s composed finish moved France closer to victory with 12 minutes to go before Sanjay’s second and third strikes of the match set up a dramatic finish. However, France held on to secure a famous win over India on home soil, giving coach Aymeric Bergamo a dream start to the world cup campaign.

“We won as a team, not as a single person, we won together”, said Clément - who represented France men at the 2018 Men's World Cup in Bhubaneswar - after the game. “It is incredible, and I am very happy for the team. To start the competition [in this way] is perfect. It’s important that we continue and win the other games because the competition is very long. It is not finished.”

The Junior World Cup action continues on Thursday (25 November) with a further five matches being played. Argentina take on Egypt in Pool D in the first match of the day at 09:30 Indian Standard Time (UTC +05.30) before the Netherlands face Pool C rivals Korea at 12:00. Spain’s Pool C clash against USA begins at 14:30, being followed by France versus Poland in Pool B at 17:00. The final match of the day sees Canada taking on hosts and reigning champions India in Pool B at 19:30.

We are pleased to confirm that the first six days of the competition (24-30 November) will be broadcast to our global audience live and free of charge via the Watch.Hockey app. From 1–5 December, the Watch.Hockey app will be live streaming matches free of charge to all territories outside of India, Maldives, Nepal, Bangladesh and Sri Lanka, locations which are subject to existing broadcast rights agreements.