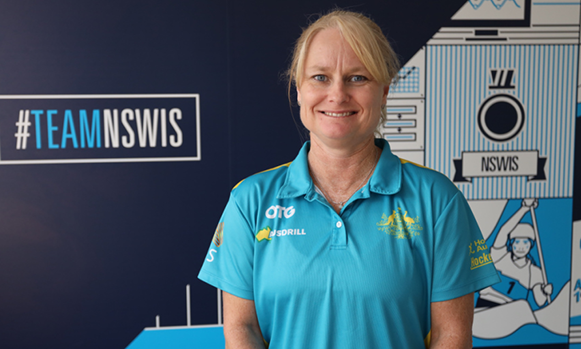 Katrina Powell is an undisputed legend of Australian hockey, enjoying the kind of success that very few people get to experience.

Alongside elder sister Lisa, Katrina Powell was an integral figure in Ric Charlesworth’s sensational Hockeyroos team in the late 1990s and early 2000s, winning Olympic gold at the Olympic Games of Athens 1996 – where she scored in the final to give her team a 3-1 triumph over Korea – and Sydney 2000, claiming her second gold medal in front of an adoring home crowd.

Those Olympic gold medals were separated by a glorious World Cup success at Utrecht 1998, as Australia – powered by the astonishing strike partnership of Powell and Alyson Annan – enjoyed a period of near complete domination.

Following a fifth-place finish at the Athens 2004 Olympic Games, Powell called time on a wonderful international career that had seen her score 141 goals in 252 games and began the well-trodden path of transitioning from athlete to coach. Now, some 17 years later, she has been named as head coach of the Hockeyroos, stepping into the void left by the recently departed Paul Gaudoin to take charge of a team she represented so brilliantly as a player.

With the Olympic Games Tokyo 2020 just a few months away, Katrina Powell talks to FIH about reconnecting with the Hockeyroos as well as her aims and ambitions going into the Olympic Games after a turbulent period for the team.

Katrina Powell, thank you so much for talking to us. Firstly, congratulations on being named as the head coach of Australia women. You must feel incredibly proud about taking charge of a team that, as a player, you gave your all for.
Katrina Powell: “Yes, I’m really proud. Obviously, I have a long history with the Hockeyroos, and as any international player will tell you who has played for a long time, it becomes your family, part of who you are. So now, to be in charge of the team, I’m amazingly proud to be in this position.”

Still early days I guess, but how are you settling into the role?
Katrina Powell: “Pretty well. It is quite a shock to be moving across the country quite quickly [from Sydney to Perth], but I spent pretty much 20 years living where the team is based, so it was pretty easy to get into the way of life in Perth. The stadium that I trained at is still where the Hockeyroos are based, so it felt a little bit like going home. Obviously, the timing of it is what makes it kind of tricky, that the Olympics is just about upon us.  So, there is some time, but not much time at all. It has been pretty much go go go!”

For those who do not know, can you tell people of your journey into coaching following your retirement as a player?
Katrina Powell: “After I returned at the conclusion of the 2004 Olympic Games in Athens, I got a coaching scholarship at the Australian Institute of Sport, giving me the opportunity to coach in pretty much the same environment that I’d just left. There were definitely challenges there. Eventually I coached the national junior team and became a national assistant coach. Later I found myself moving back to the east coast of Australia – where I was originally from and where my family are still based – and started coaching at the New South Wales Institute of Sport, which is part of our development pathway. I got to coach young players that were aspiring to be Hockeyroos, which I found to be really rewarding. I really enjoyed living in Sydney as well, just for a different perspective on the world, being thrown into a big city like that. My time at the New South Wales Institute of Sport was really valuable in terms of my development and growth as a hockey coach. I suppose it helped to rekindle that love of developing the technical and tactical things that athletes are unaware of, and what is required at the next level. I think for a while I found my niche there, coaching and mentoring the next generation of Australian hockey players.”

Are any of those young players you coached part of the current Hockeyroos group?
Katrina Powell: “Yes, there are a few here now. The likes of Mariah Williams, Geta Hayes, Grace Stewart – most of the ones that have come out of New South Wales I’ve had something to do with. It’s really pleasing to come back and work with them again. That has been the beauty of stepping in now and seeing them in this environment, acknowledging the growth that they have made over that period. It is really nice to see how they have progressed into not just being amongst the world’s best hockey players who really perform on the international stage, but also what good people they are.”

Looking ahead to Tokyo. As always at an Olympics, every match is difficult. The focus will be all about getting out of those tough looking pools and into the quarter-finals. In a pool with Argentina, New Zealand, China, Spain and hosts Japan, it certainly won’t be straight-forward.
Katrina Powell: “No, it won’t be. There is a mixture of styles. I suppose our recent history against some of those teams as well, that we are competing against [could be better]. And playing the host country is never easy, so yes, we have a big task ahead of us. It is all about the preparation to make sure we are playing the best we can. We will face and take on any challenge that comes at us.”

There is the Oceania derby match against New Zealand – you played a few of those in your time. That should be special at an Olympic Games.
Katrina Powell: “Definitely. We seem to regularly get New Zealand in those big tournaments as well, so we have got that fierce rivalry happening. We are obviously ‘cousins’ – the Australia-New Zealand relationship is a really special one, and certainly through covid it has felt even more special. We have been trying to create the ‘Trans-Tasman bubble’, and all that kind of stuff, with both countries having dealt pretty well with the pandemic. We have been helping each other to get through that. In terms sport though, there is a long history of really wanting to beat each other, in any number of sports. That hasn’t changed – it will be the same again. We are probably underdogs in that [rivalry] now. It is not the same as it used to be – they have had the better of it for a number of years. We would go in as the underdog, and they would be the favourite.”

It’s been a turbulent period for the Hockeyroos. With Tokyo so close, does that change the way approach this competition? What is the big goal in Tokyo?
Katrina Powell: “I think for us the objective is to make the semi-finals and see what happens. Obviously, there is a massive quarter-final to get through, so I think we’ve got until the quarter-final to continue to develop and get better – it is not as savage as Atlanta [1996], where you had to finish top two [in the round-robin to play the gold medal game]. We have chances all the way along, so if there is a belief in what we are doing and a development over a number of matches – [keeping in mind that] we will have limited international hockey matches before we get there – we are aiming for our performance to be good in the quarter final, and therefore make the semis. I think that is a realistic goal.”

I guess, once you are in the semis, anything can happen.
Katrina Powell: “Absolutely. I’m banking on it.”

Once again, thanks once again for joining us today. We wish you the very best of luck for Tokyo 2020.
Katrina Powell: “Thank you very much!”