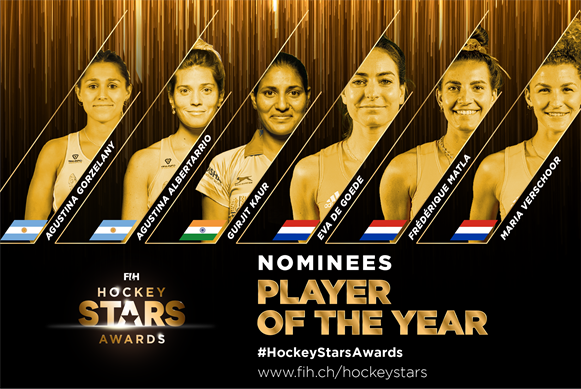 The shortlist for the FIH Hockey Stars Women’s Player of the Year for 2020-21 is, as you would expect, a who’s who of athletes that have performed magnificently for their respective nations. Five of the six players nominated played in the gold medal match of the Olympic Games Tokyo 2020 between the Netherlands and Argentina, with a terrific athlete from India – who finished fourth in Tokyo – also getting the nod.

Argentina’s Agustina Albertarrio played an instrumental role in her team’s silver medal winning performance at the Olympic Games Tokyo 2020, with the live-wire attacker terrorizing defences throughout the competition thanks to her speed and 3D skills. At 28 years of age, she is fulfilling the potential shown in her younger years and very much looks to be hitting her prime.

Netherlands captain Eva de Goede continues to be the heartbeat of Alyson Annan’s extraordinary Netherlands team, with the peerless midfielder being the driving force as the Oranje claimed the Olympic, European and FIH Hockey Pro League titles in the same calendar year. Tokyo 2020 was a third Olympic gold medal for de Goede, adding to those claimed at Beijing 2008 and London 2012 in addition to the silver from Rio 2016. With Paris 2024 just three years away, a fourth Olympic gold medal is certainly not beyond the realms of possibility.

Over the past two years, Agustina Gorzelany has developed into an integral part of Carlos Retegui’s Argentina team, with the 25-year-old proving herself as a fearless defender as well as a potent threat from attacking penalty corner situations. ‘Gorze’ scored four times in eight matches at Tokyo 2020, one of which came in the Olympic final defeat at the hands of the Netherlands. She also registered a goal against the Oranje in the 2020-21 edition of the FIH Hockey Pro League, scoring the opener as Las Leonas claimed a 2-0 victory over their European rivals in Buenos Aires.

With 64 goals in 95 international matches for India, Gurjit Kaur’s penalty corner record speaks very much for itself. However, in 2021, she proved that she is capable of performing on the greatest stage of all. At the Olympic Games Tokyo 2020, Gurjit produced a string of wonderful performances, with arguably her finest moment coming in India’s shock 1-0 quarter-final victory over Pool B winners Australia, where she scored the only goal of the game while marshalling her defence to a clean sheet against the Hockeyroos. It was a result that guaranteed India their joint highest ever finish at an Olympic Games, matching the fourth place achieved at Moscow 1980.

A former nominee for the FIH Rising Star Award, 24-year-old Netherlands attacker Frederique Matla has continued her progress to become one of the most feared goal scorers in international hockey. A nine-goal haul at the Olympic Games Tokyo 2020 was a telling contribution to the team’s gold medal success, scoring three field goals, four penalty corners and two penalty strokes in her eight matches. It was the second successive top scorer award for the Oranje striker, who also netted eight times in June’s EuroHockey Championships to help her team defend their title. Additionally, she also scored seven times in ten appearances in the disrupted 2020-21 FIH Hockey Pro League, helping the Oranje to successfully defend their title.

Another member of Alyson Annan’s all-conquering Netherlands team, Maria Verschoor’s lively attacking play certainly caught the eye at the Olympic Games Tokyo 2020. Her pacey, direct attacking runs proved to be a nightmare for opposition defenders, and also contributed two goals – including a crucial penalty corner in a 5-1 semi-final thrashing of Great Britain – on the way to the Oranje claiming that coveted Olympic gold medal.