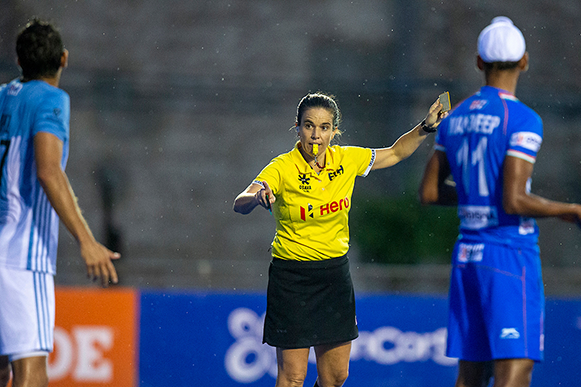 Following appearances at the Olympic Games of Athens 2004, Beijing 2008, London 2012 and Rio 2016, Argentina’s Carolina de la Fuente will bring the curtain down on a remarkable international umpiring career at the Tokyo 2020 Olympic Games.

Carolina – who umpired the women’s final at Beijing 2008 and has numerous World Cup and Pan American competitions etched onto her dazzling CV – is one of only a handful of officials to have umpired over 200 internationals, earning her Golden Whistle on the occasion of her 100th international match way back in 2009.

As of 22 April, Carolina had umpired 204 senior international women’s matches as well as one men’s – the recent FIH Hockey Pro League clash between Argentina and India in Buenos Aires. She has also been in the video umpire hot seat on 17 occasions (although she openly admits that she prefers to be on the field of play), with 14 Under-21 international contests under her belt.

Carolina talks to FIH about her wonderful career, reflecting on some of the key moments and also how she is just as excited about Tokyo as she was for her Olympic debut at Athens.

Carolina de la Fuente, thank you so much for talking to us. You are one of the world’s most experienced international umpires, having umpired well over international 200 games. You must be very proud of everything you have achieved in the game.
Carolina de la Fuente: “Well yes, I am. I am happy and I feel that I am where I want to be. I always tried to get here, so I feel very happy. My major dream was to always be a good example for the rest of the umpires, so it is not just about being in my fifth Olympic Games. It is to deserve it, so I feel happy [about that].”

As you mentioned, Tokyo 2020 is your fifth Olympic Games, following appearances at Athens 2004, Beijing 2008, London 2012 and Rio 2016. Are you as excited about Tokyo as you were for your first Games in Athens?
Carolina de la Fuente: “Yes. I think it has been a long journey, with different feelings, but I think because this will be my last, it is as exciting for me as the first one. In the first one, I felt like a VIP spectator, to be there with the best umpires in the world. Now, I think I will be a VIP spectator about myself, [reflecting on] when dreams come true. I am very excited – I cannot wait. I know that it will be a different [experience] because of the covid situation, but I am still very excited.”

Going back to that first Olympic Games in Athens, that must have been a very special experience for you. What are your memories from that one?
Carolina de la Fuente: “I remember the panel of umpires who shared that moment, like Chieko Soma [of Japan], who I shared a room with. It was a very special moment for her, because her dad had died recently. But I still have good memories of it. We lived in a special military centre, which was both funny and different – it was strange, but okay! The atmosphere, being in Athens where the Olympics started, was amazing too.”

You must have great memories from all of the Olympic Games that you have been involved in, but is it possible for you to name your favourite so far?
Carolina de la Fuente: “Well, yes! Beijing was my favourite. I think the atmosphere, the opening and closing ceremonies, and because of my personal moment – I did the final in Beijing – I think out of all of the tournaments it was my favourite.”

What is it like to umpire an Olympic final? That must have been very special.
Carolina de la Fuente: “Yes, it was. I didn’t expect and wasn’t working to be [in the final]. Sometimes it depends on you, but also the teams [that are playing in the final] and which are the best umpires to be on the field [for a particular match]. Sometimes you are good enough but there are a lot of [factors]. I prepared to be the best version of myself for that moment, which I think I [achieved]. It was so great to be in that final.”

Going back to the very start, can you tell us what or who inspired you to become an umpire?
Carolina de la Fuente: “I was never a very good hockey player, but I always wanted to be part of the game, to share [experiences] with my colleagues and feel like an athlete. When you are young you always umpire friendly matches, and the feedback from the players was good, saying ‘ah, Caro, you are good enough!’, so I said why not! There were some people at my club that pushed me, and told me that if I studied English, I could become an international umpire, and here I am!”

Finally, if you could give one piece of advice to any young umpires out there, what would it be?
Carolina de la Fuente: “Enjoy the trip! It is not all about umpiring finals. Recognise how you can be a good part of the team. Just do it and enjoy it.”