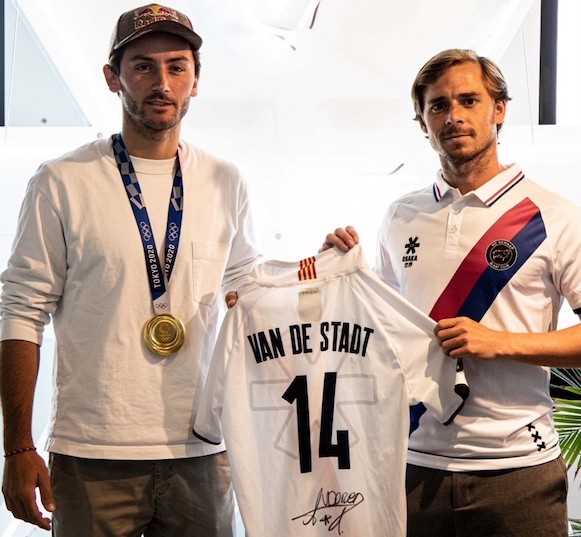 Hockey Club Schaap is a unique hockey club. It is unique because it has just four members and doesn’t compete in any league.

In fact HC Schaap (a Dutch term which translates as sheep) is a place where four friends – all of them passionate hockey players – meet to talk about the sport and many more things besides. The name? The four friends chose to call themselves HC Schaap because sheep stick together and are never alone.

There is now a deeper raison d’être behind the formation of HC Schaap. One of the four founders, Michiel van de Stadt, has been diagnosed with a very rare soft tissue cancer. There have only been a few hundred cases worldwide.

With the cruellest of timings, Michiel discovered his illness shortly after he had made his dream hockey move, to play for FC Barcelona and to study for his Masters degree in the Spanish city. He had swiftly made a name for himself as a penalty corner specialist and was the club’s top scorer. Playing in the EHL was just around the corner, but those dreams had been swiftly shattered.

Prior to the diagnosis, 24-year-old Michiel had been one of the fittest players in the squad. When he started to struggle on the training ground he sought medical advice. The first doctor he saw was unable to identify what type of cancer Michiel was fighting, so Michiel returned to the Netherlands to seek specialist advice from the Antoni van Leeuwenhoek (AVL) Institute in Amsterdam. The AVL is a world renowned cancer treatment clinic.

The news that Michiel would now be fighting for his life spurred his three friends into setting up a charitable fund. In collaboration with kit specialists Osaka, Paul Reinders Folmer designed a shirt for HC Schaap with details referring to Michiel. Any copies sold raise funds for Michiel's bucket list.

As soon as he heard the plans, Michiel refused the idea of a bucket list fund, insisting that all profits raised would go to the Antoni van Leeuwenhoek Foundation, which supports the work of the AVL.

Within one week of launching the charity, HC Schaap member Anthony Boschman reports that more than 400 shirts have been sold, including one signed by Belgium international and Olympic champion, Arthur van Doren.

Read the whole story and support HC Schaap and their battle: https://osakaworld.com/collections/hc-schaap