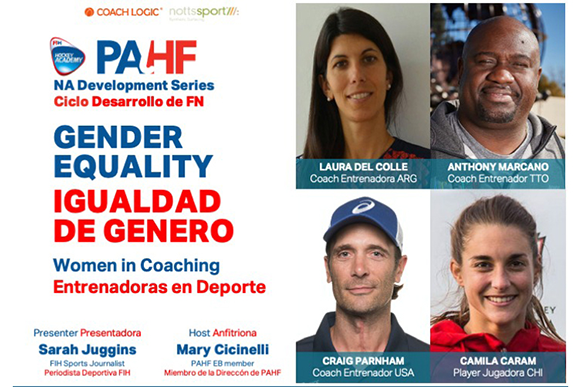 The Pan American Hockey Federation (PAHF) got off to a flying start with a gender equality webinar that sought to bring issues of equality to the fore and offer some potential ideas to make our sport more accessible to everyone.

An introductory webinar was held at the start of the year, hosted by the FIH Academy, with national associations from around the world hearing about the importance of developing strategies that will continue to meet FIH aspirations to offer equal opportunities to everyone. Each continental federation was tasked with identifying an aspect of gender equality towards which they would seek to build a strategy.

Following this, PAHF held a webinar to discuss ways that a gender equality strategy could be implemented that would be relevant and useful to its diverse membership. The PAHF Executive Board, in consultation with its national association members decided to focus on the issue of low numbers of female coaches, particularly at elite level.

Fleuren opened proceedings by congratulating PAHF on being the first continent to organise a webinar exploring the topic of gender equality. Her challenge to the attendees was to take ideas from the webinar back to their own national associations and use them to drive change in equality-related issues.

Next to speak was PAHF Executive Board member Mary Cicinelli. The Canadian explained that the focus of the PAHF webinar would be on female coaches working within the game. Cicinelli acknowledged that there were huge differences across the continent in terms of access, opportunity and appointment of female coaches, but added that the webinar should offer some thoughts and ideas that every national association could take away and incorporate into a strategy for the future.

The webinar took the form of a debate and discussion among four prominent members of the hockey community: Argentina’s Laura del Colle, an Olympic silver medallist with Las Leonas and now a successful and well-known coach and FIH educator; Anthony Marcano, who coaches both internationally as a FIH educator and within his own home country of Trinidad and Tobago; Camila Caram of Chile, a member of the FIH Athletes’ Committee and one of the stalwarts of the Diablas squad; and Craig Parnham, an Olympian who played for and coached Great Britain before becoming first Head Coach and then Director of Coaching for USA Field Hockey.

Over the course of the webinar, the four panelists outlined the situation in their own country – in the case of the majority of national associations, up to 90 per cent of operational coaches are male. The USA is an outlier in this respect, due to the strong college system that caters for female players and coaches. All panelists agreed that women tended to coach mainly at junior level and without being paid for their work.

The expectation ahead of the webinar was that there would be a diverse range of issues because of the very diverse nature of the countries within PAHF. In fact, as Cicinelli remarked in her closing statements, much of the debate and discussion had highlighted a surprising amount of homogeny across nations in both outlook and aspirations, when it comes to the important issue of gender equality among coaches.

Among the issues that PAHF will now press on to address are: the continued adoption of a blended approach to learning, which would combine online courses with face-to-face training/education sessions; access to women-only courses, particularly at entry level; raising the level of professionalism within the coaching structure; raising awareness of inequality and providing support for women to advance up the coaching ladder; and improving the visibility of successful female coaches to provide role models for aspiring women coaches.

Wrapping up the session, Cicinelli said: “The webinar has unearthed a lot of thinking and ideas that all the PAHF nations can tap into.”