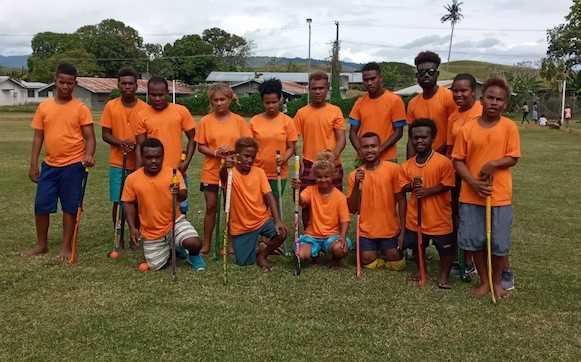 Hockey ID is developing in the Solomon Islands.

Sometimes it just takes a few people with ambition and a clear vision to make things happen.

And that is exactly what is happening in Chile and Papua New Guinea, as both nations are busily preparing their Hockey ID teams for the 2023  Special Olympics World Games in Berlin.

In South America, driven forwards by former international Daniele Caram, Hockey Inclusivo de Chile is working with the Chilean Hockey Federation and Special Olympics Chile to relaunch a programme of activities preparing their athletes for an international adventure. The programme originally began in 2019 but Covid-19 brought activities to an abrupt halt and, at time of writing, Caram and her team were working to get training underway again.

For Norman Hughes, who is FIH Hockey ID Project Lead, the fact that Chile are planning on sending a team to the Special Olympics World Games, despite the long delay caused by the pandemic, is excellent news.

“Daniela Caram has been in contact recently to say they will be starting up activities again, which is brilliant news. They are working hard against all the odds. We know we have a great workforce in Chile that do a really good job. They really are a group that punch above their weight.”

In preparation for the World Games, Chile Hockey ID will be linking and knowledge-sharing with Argentina’s own Hockey ID group leader Silvina Gorrissen. In time this could lead to matches between the two nations. For Hughes, there is also the exciting prospect of Hockey ID becoming part of regional and continental games and championships within the Pan American region.

“If you have a couple of nations playing Hockey ID, then why not encourage them to send their groups to an event and do a demonstration game. It would bring more attention to the sport and be a great opportunity for the groups to travel and learn how to prepare for a tournament away from home.”

Hughes’ point is a good one: for many of the players, being away from home and knowing how to cope with tournament conditions is not something many of the athletes will have experienced. Travelling from Chile to Berlin will be an extraordinary achievement and a challenge that Caram and her team are relishing.

Over in Papua New Guinea, Oceania Development Officer Gill Gemming is coordinating development work, including Hockey ID. She has been liaising between the local hockey group and the local Special Olympics group. She is also linking the Hockey ID programme with the HookedIn2Hockey campaign, which promotes healthy living through hockey participation. This link brings the added advantage of securing equipment for hockey activities.

Hughes explains that, in the case of Papua New Guinea Hockey ID, it took a little support and encouragement for them to set their ambitions firmly on the Special Olympics World Games Berlin 2023.

“This is a case of a local Special Olympics group really instilling some confidence in the hockey group to chase this ambition.”

Adding another layer of support, members of the national PNG hockey team have been helping with coaching.

The Solomon Islands are also starting some activity, again with national team players taking a leading role. This will provide Papua New Guinea with some local opposition in preparation for the Special Olympics World Games.

As with the Pan American example, Hughes is hopeful that Hockey ID groups in Australia and New Zealand will soon get on board. There are strong Hockey ID groups in both nations but, as yet, they are not playing other nations. “Ideally we would like to see local, regional and then national events, so they build up that way.”

With PNG and Chile both ready and willing to step onto the international stage, the 2023 Special Olympics World Games are set to be a very special moment for hockey development and inclusivity.