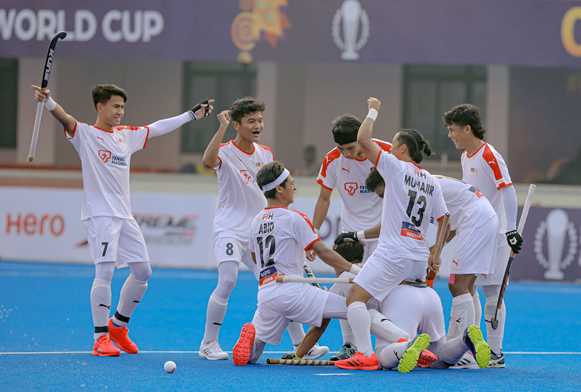 In the penultimate day of pool matches at the FIH Men's Hockey Junior World Cup, Pakistan kept their hopes of a place in the last eight alive with a win against Egypt. The Pakistan team must now defeat Argentina if they are to finish in the top two in Pool D. France continued their fine form making it three wins from three matches with a convincing victory over Canada. South African hearts were broken when Malaysia snatched the win with just three minutes left on the clock. The final two matches of Day Four set the scene for the final eight when Belgium sealed top spot in Pool A, meaning they will meet India in the next round. The host nation beat Poland in the final match of the day to finish second in Pool B. The encounter will be a repeat of the 2016 Junior World Cup, where India beat Belgium to become Junior World Champions.

Three goals for Ali Rizwan kept Pakistan’s hopes of qualifying for the quarter-finals alive as they beat Egypt 3-1 in the opening match of the day. The penalty corner specialist hit his stride in the 19th minute and then fired in two more in the third and fourth quarter to give Pakistan their first win of the competition. Egypt rallied with a fine goal from Hussein Awad, but the Asian team pressed on to take the all-important points.

With Germany already qualified from Pool D, Pakistan now face a must-win final match against Argentina, with both teams needing a win to qualify for the final eight.

Pakistan’s Moin Shakeel, who was Player of the Match, was quick to point out the benefits of a good penalty corner routine. “Our coaches had asked us to take the short corners and we have the plus point in the short corners. We did it in the second half, so we got opportunities and we scored the goals. Now we are focusing on our next game, targeting that we have to win it to qualify for the quarter finals. This is our opportunity to get goal scoring and get the ball possession. We will play like this again against Argentina.”

“I’m very proud of my teammates, said a reflective Mahmoud Seleem of Egypt. “They tried their best. They fought well. Today we were in better spirits. We tried to do efforts as a team, as one unit, and that showed a different story from two days ago.”

France continued their impressive progress through the competition with a convincing win over Canada. The French, under the guidance of Head Coach Aymeric Bergamo, have been nothing short of sublime as they have won three from three to secure a place in the quarter-finals. In this performance, they took the game to Canada, playing a high tempo game which only slipped slightly in the third quarter, when Canada were able to pounce on some sloppy play to score through Sean Davis.

Speaking after the match, Player of the Match Antonin Igau said: “We played very well throughout the pool stage. So, we are very happy. Clinching the top spot of the pool is really hard, especially with India in the same pool. We’re very proud of this performance. Winning against India is always amazing, and even more so in India. So, for sure, this has given us confidence for the rest of the tournament."

For Canada, coming to terms with three losses is tough but Christopher Tardif was philosophical about the result: “Looking at our pool stage matches, I think we did some good things but also some bad things. Our best performance is yet to come. Not a lot of our guys have international experience so there is so much that we’ve learnt such as the speed of the game, the fitness component, just much more. So, when we go back, we’ll become better hockey players and can play at the international level.”

Malaysia secured a place in the last eight after a nail-biting encounter with South Africa. Malaysia took the lead in the 29th minute through Muhammad Khalid only to see South Africa bounce back just after half-time through captain Guy Morgan. The Asian side took the lead again in the 41st minute only to see two quick goals from Jared Campbell give the lead to the African contenders. Three yellow cards in the final quarter indicate the fiercely competitive nature of this game. Eventually, hero of the day for Malaysia was captain Akhimullah Anuar who put away a penalty corner to snatch the lead and put his team into the quarter-finals.

Player of the match was Malaysia’s Kamarulzaman Kamaruddin. He said: “I’m very happy. My teammates and my coaches gave 100 per cent and give the spirit of the team. We fought all together. We fought for every ball, for everything in this match and so we managed to win.

South Africa’s captain, Guy Morgan, said: “First, congratulations to Malaysia. But I think we let ourselves down today, especially with cards at the end. We had so many opportunities. We controlled the majority of the game. That’s fairly frustrating.”

Belgium came into this match determined to seal a first place finish in Pool A and Lucas Putters answered that particular demand with a well taken goal in the third minute. Player of the Match Thibeau Stockbroekx doubled the lead just before half-time and Nelson Onana sealed it with a third in the 48th minute.

The result means that Belgium finish top of Pool A, ahead of Malaysia on goal difference and will meet India in the quarter-finals.

Reflecting on both today’s game and the next challenge, Belgium’s Thibeau Stockbroekx said: “We came here for the first spot in the pool. It was difficult but I think we did the right things. Today was a hard game for us. Yesterday also. Really good defending from our opponents, so it’s difficult to score goals but we did manage. It’s always nice to play India here. I think it will be a really good opportunity for us to show our best level and see where we’re at.”

The result means Chile finished in fourth place in Pool A and will meet Poland in their classification match. Nicolás Abujatum said his side were learning with every match: "I think we have had a pretty good evolution during the tournament. At the start we had to get into the rhythm, but I think we ended up playing a very good match against Belgium. We have to keep working on where we are failing, namely the short corners.

“We haven’t accomplished our first goal which was to be in the top eight but we will keep on trying, set ourselves a new goal and finish as high as possible. It was a very good match to prepare for what is coming.”

The reigning champions and host nation overcame a determined and challenging Polish team to book their place in the final eight. Despite a scoreline of 8-2, this wasn’t an easy game for India and a number of yellow cards in the second half may concern Head Coach Graham Reid.

That said, it was an energetic performance with goals flying past Maciej Wieczorek in the Poland goal with regularity. Sanjay, who has enjoyed a fine competition so far, opened the scoring in the fourth minute and added to his talk in the 58th minute. Player of the Match Sudeep Chirmako also got among the scoring players with a double.

For their part, Poland will be left rueing a number of missed chances, something their captain Gracjan Jarzynski emphasised in the post-match interview: “The problem for our team is scoring from penalty corners, we should have scored more goals. We made simple mistakes in defence, but we also made lots of opportunities to score.

“Now we have two days which gives us time to look at penalty corners and improve things. We have time to prepare and train for the next match against Chile. We will try to surprise them.”

Player of the Match Sudeep Chirmako said: “This was an important match for us because we had lost one match but we executed well today. Regarding the quarter-finals [against Belgium], it is very important as it is elimination. But we have a plan and we will try to execute it.”

The Junior World Cup action continues on Sunday (27 November) with the final four matches being played. While the final placings in Pool A and B are settled, there remains unsettled business in the remaining two pools. Korea take on Spain in Pool C in the first match of the day at 12:00. Indian Standard Time (UTC +05.30). The Netherlands then face USA, also in Pool C at 14:30. The Dutch must win this match to ensure they top the pool, because a loss – and a win for Spain – could see Spain overhaul them on goal difference. This is followed by an all-important match between Pakistan and Argentina in Pool D at 17:00. The winner of this game will take the second qualification spot behind Germany. The final pool match sees Germany versus Egypt in Pool D at 19:30.