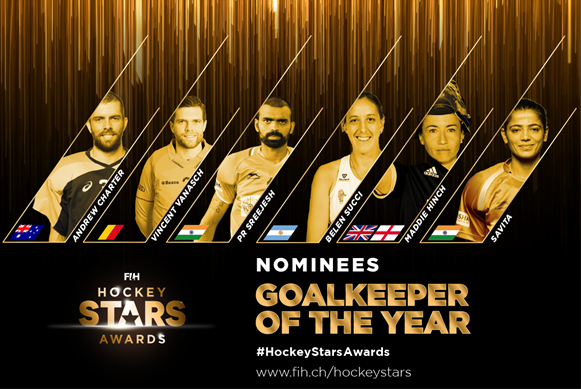 Hockey is lucky to have an abundance of world class goalkeepers and compiling a short list was a tough ask. The six nominations – three men and three women – all have outstanding claims to the title, but it must also be acknowledged that they are members of an extremely talented club when it comes to world class shot-stopping.

All six of our nominations have enjoyed long international careers and have provided the foundations from which their team mates have been able to build.

Goalkeeper of the Year - Men

Andrew Charter, Australia
Andrew Charter was in the form of his life at the Olympic Games Tokyo 2020, showing his brilliance throughout the showpiece event in Japan with a string of stunning saves to help the Kookaburras claim the silver medal. Charter – a World Cup winner in 2014 where he conceded just three goals – produced a heroic performance in the Olympic quarter-final against the Netherlands, keeping a clean-sheet in the shoot-out to help his team into the medal matches.

The 34-year-old’s brilliance continued in the semi-final against Germany when he saved a string of penalty corners to ensure his team had a platform from which to build their attack. Nominated for FIH Goalkeeper of the Year in 2014 and 2015, Charter has played for the Kookaburras 193 times. This year’s Olympic Games Tokyo 2020 were the perfect platform for the genial ‘keeper to show his credentials as one of the best in the world.

Parattu Raveendran Sreejesh, India
India’s first Olympic medal in 41 years has turned the entire squad into national heroes but one giant of a man towers above them all. PR Sreejesh the 33-year-old goalkeeper was magnificent as India battled past Germany to win the bronze medal.

Sreejesh made his debut for the senior national team in 2006 and has represented his country 244 times since then. He has spoken in the past about how he sees goalkeeping as a chance to “put up a one-man show”. Throughout the competition, as he dived and blocked and urged his teammates to new levels of defensive responsibility, you could see just how much he was enjoying being the platform from which his team could counter-attack.

Vincent Vanasch, Belgium
Vincent Vanasch raised his arms in triumph and his team headed over to celebrate winning Olympic gold. Seconds later the team were trooping dejectedly away because Australia had been awarded a re-take of the shoot-out attempt that would have determined the gold medal.

The three-time FIH Goalkeeper of the Year (2017, 2018 and 2019) re-set himself and seconds later his giant boot cleared the ball and Belgium were indeed Olympic champions for the first time in their history.

The Belgium coach and players were unanimous in their assertion that Vanasch, who has 252 international caps, came “from another planet”. Certainly, his performances as the Red Lions made their way through the pool matches and the knockout stages were absolutely world class. Calm under pressure, commanding with his presence but with a humour that makes him a rock star in the team, Vanasch and the gold medal looked made for each other.

Goalkeeper of the Year - Women

Belén Succi, Argentina
When it comes to longevity, Belén Succi of Argentina has been a willing servant to Las Leonas for 15 years. Succi won Olympic bronze with Argentina at Beijing 2008 and 13 years later she was a pivotal player in Argentina’s silver medal win at Tokyo 2020.

Succi has represented her country on 248 occasions and was part of the Argentina team that won the World Cup back in 2010. At these Olympic Games, she was a commanding presence at the back for Las Leonas, excelling in the quarter-final and semi-final victories against Germany and India respectively. The passion etched all over Succi’s face as she belted out the anthem demonstrates that the fire burns just as brightly now as it did for the 35-year-old at the start of her  international career.

Maddie Hinch, Great Britain & England
Great Britain’s shoot-out star at Rio 2016 was back to her brilliant best at Tokyo 2020, producing numerous stunning saves to help her team claim the bronze medal. Earlier in the competition, Hinch was magnificent in Great Britain’s victory over Spain in the quarter-finals, keeping a clean sheet in the shoot-out to maintain her team’s medal hopes before being instrumental in her team’s triumph over India.

Already a three-time FIH Goalkeeper of the Year (2016, 2017 and 2018), 32-year-old Hinch, who has a combined total of 166 Great Britain and England caps, was delighted to add an Olympic bronze medal to the gold she won in Rio de Janeiro five years ago.

Savita, India
When India women’s team matched their highest ever finish at an Olympic Games, it was the Eve’s goalkeeper Savita who emerged as one of the heroes for the team. Savita, had a wonderful Olympic campaign at Tokyo 2020, earning praise for her positioning, reactions and courage.

The highlight of a string of good performances came against Australia in the must-win quarter-final. The 31-year-old was simply sensational in India’s quarter-final victory over Australia, keeping a clean sheet as the Hockeyroos racked up nine penalty corners and 14 shots to help her team into their first ever Olympic semi-final. Savita – who has played 210 times for her country – produced further outstanding performances in the narrow semi-final and bronze medal defeats against Argentina and Great Britain.