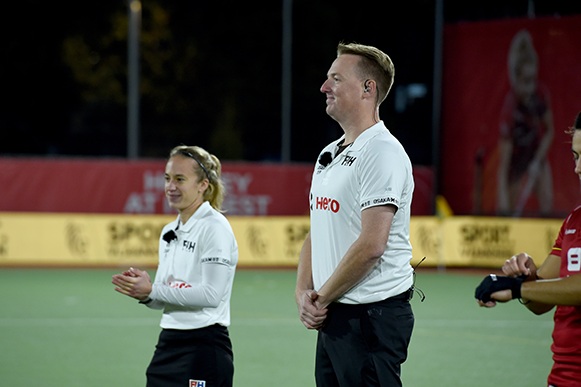 Following the recent mixed gender umpiring appointments for the FIH Hockey Pro League matches involving Belgium, the Netherlands and Great Britain, we spoke with Dutchman Coen van Bunge and Laurine Delforge of Belgium about the brief but brilliant return of international hockey.

It was an extra special occasion for van Bunge, who became the first person since Peter Elders some 17 years ago to umpire 100 international matches when he took charge of the Low Countries derby match between the men of Belgium and the Netherlands, alongside Delforge.

Hi Coen and Laurine – thank you so much for talking to us. First question to you, Coen! What does it mean to you to reach your golden whistle milestone of 100 international matches?
Coen van Bunge: “As an umpire, it’s very special to reach 100 international caps, so I’m very honoured to join the ‘golden whistle club’, being the next Dutch umpire after Peter Elders joined it 17 years ago.”

Due to completely understandable circumstances, your 100th game is certainly unique, especially with the Netherlands, your home country, being one of the competing teams. Does it make it even more memorable?
Coen van Bunge: “I’m sure that no-one will forget this game – it was played under crazy circumstances. Everyone who was there in the stadium made it special for me, and to umpire a home country, it was unique in an FIH competition. To reach my 100th cap during this game made it even more memorable.”

A question to both of you. The players have loved the fact that we have seen the return of international hockey, despite the very different circumstances to usual. As world class umpires, you most both feel the same, right?
Laurine Delforge: “It felt really good to be back on the pitch. My last game internationally was more than a year ago, so it has been a long time without doing something I really love. So just like the players, I really enjoyed every minute being on the pitch in the last couple of days.”

Coen van Bunge: “It was after a long time that international hockey resumed again, and I can say that I truly enjoyed every minute of it. Of course it is better or more special to umpire in front of 10,000 spectators, but to do what you love, it doesn’t matter how big the crowd is.”

How much have you both enjoyed the games and the mixed gender umpiring appointments?
Laurine Delforge: “The level of hockey was really good. It’s a pity that we couldn’t have any public there, but we were just feeling really privileged to umpire again. On a personal note, it was a big challenge to take on, but I’m quite happy with how it went. It was also very special for me to share the pitch with Coen for his 100th cap, so I would like to congratulate him on his big milestone.

Coen van Bunge: “I liked the way that the players interacted with us just the way that they normally do. I am sure that we will see the mixed gender appointments more often, and I’d like to see the next men’s Belgium versus Holland match to be umpired by two female umpires.”

Laurine Delforge: I really appreciated the mixed gender appointment. At the end of the day it is the same game, the same sport, so I just really enjoyed the connection I had with Coen and (fellow umpire) Jonas (van ‘t Tek) on pitch, the teamwork that we had together. For me it was just another game to umpire, and I was just very happy to be on the pitch.”