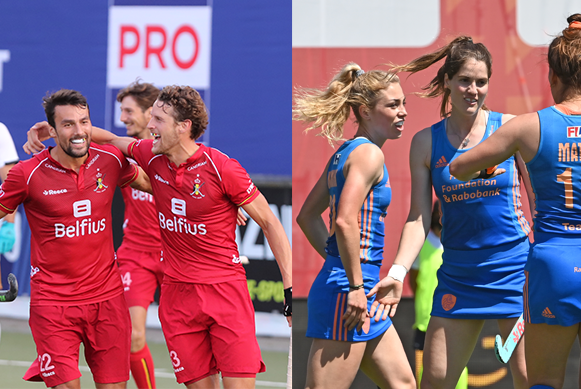 There has been little movement in the FIH World Rankings, with the Red Lions of Belgium and Netherlands Oranje holding onto top spot in their respective tables.

And, as we approach a busy few months of hockey competition, including continental championships and, of course, the rescheduled Olympic Games Tokyo 2020, the FIH World Rankings can provide a snap-shot of how the nations are performing.

Despite the recent match cancellations, due to Covid-19 restrictions, there have still been some scintillating matches played in the FIH Hockey Pro League, not least the 5-3 thriller between the national men’s teams of Great Britain and Germany; the fiercely contested 2-3 match in Buenos Aires again featuring Germany men as they defeated Argentina; and three consecutive draws in the test matches between Oceania rivals Australia and New Zealand (Women).

The most recent FIH Hockey Pro League matches saw both the men’s and women’s teams of Netherlands and Belgium go head-to-head in a one-off match billed ‘Winner’s Day’. It was here that Netherlands women and Belgium men were crowned FIH Hockey Pro League champions for this season. It was a double triumph as both sides also retain their places at the top of the FIH World Rankings.

Alyson Annan’s side signed off in style with a 3-0 win but Max Caldas managed to spoil Shane McLeod’s final FIH Pro league match of Season Two as he masterminded a 4-0 win.

In the women’s FIH World Rankings, Netherlands (2772.084 points) have extended their lead at the top of the world rankings to 537 ranking points ahead of second placed Argentina (2235.598). Australia (2117.490) climbed to third position after their recent test matches against New Zealand at the Trans-Tasman series. Germany (2115.185) slipped to fourth position, while England (2111.857) are ranked fifth.

Just outside the top ten, the Belgium Red Panthers (1579) are piling pressure on Korea (1580) as they move to within one ranking point of the Asia team.

Germany (2112.568) have jumped to fifth, courtesy of recent performances in the FIH Pro League, and England/Great Britain have also moved up a spot to sixth on 1976.092. Both sides have leapfrogged the reigning Olympic champions Argentina (1923.420).

The rankings calculations model that FIH introduced on 1st January 2020 moved away from the previous tournament-based rankings system to a dynamic, match-based method where opposing teams exchange points in official, FIH sanctioned games. The number of points exchanged depends on the result of the match, the relative ranking of the teams and the importance of the match.

• Based on the Elo rating system, which is used as the basis of many other sports ranking systems

• When two nations play against each other, a number of ranking points are exchanged between them

• The number of points exchanged is dependent on the result of the match (win, lose, shootout win/loss or draw), the importance of the match (part of a major tournament, or a test series for example), and the relative difference in ranking points between the teams before the match