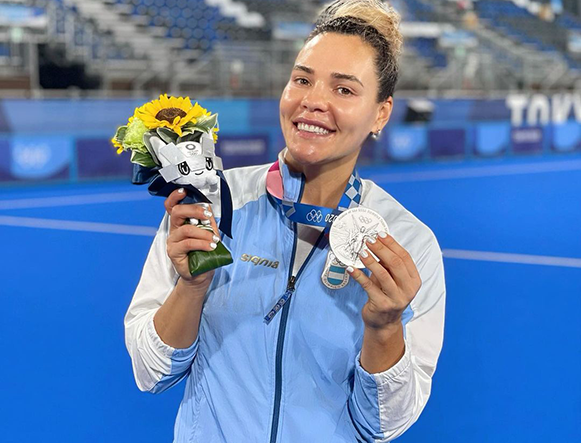 Three months after guiding Las Leonas to a silver medal at the Olympic Games Tokyo 2020, legendary Argentina defender Noel Barrionuevo has announced her retirement from international hockey, revealing her decision in an emotional message on Instagram.

“Goodbyes are always sad”, wrote the 37-year-old, who captained the team in Tokyo and made 345 senior international appearances in a hugely successful 14-year spell with Las Leonas, her final appearance coming in the Tokyo Olympic final loss to the Netherlands. “There is no way to mask nostalgia. More when it comes to places where one was so happy. But the time has come to announce the retirement.

“I can only thank all those who were part of this beautiful path and who accompanied me on the journey, teaching me, accompanying me, supporting me. At every step. To those who, with a "challenge", made me a better person and athlete. To my teammates from the Selection. To each and every one. From the first day to the last I learned from them. All the moments lived, the trips, the training camps, the joys, the sadness, the emotions, the disappointments, the laughs ... They are images and sensations that will accompany me forever.

“Representing Las Leonas was, with absolute certainty, the highest pride of my career. And that is not going to dilute over the years. For the simple reason that it branded me with fire.

“A very important stage of my life is closing. I am happy and at peace with the decision to retire. I come to this day with the tranquillity of someone who left their heart on the field and always praised work and commitment as core values. Thank you all for teaching me, for making me grow as an athlete and above all as a person!”

The silver at Tokyo 2020 was the third Olympic medal of Barrionuevo’s stellar career, having won bronze at Beijing 2008 and silver at London 2012. The drag-flicking defender also bagged 109 international goals, notably scoring in her team’s World Cup final victory over the Netherlands in Rosario in 2010 and, more recently, netting both goals in  the 2-1 defeat of India in the Tokyo 2020 semi-finals.

In addition to numerous Continental Championship title at the Pan Am Games and Pan Am Cup, she was also a central figure in the Argentina team that, between 2007 and 2016, featured in eight successive Champions Trophy finals, of which her team won six.

Barrionuevo will be remembered as one of the all-time greats of the game, and the FIH would like to congratulate her on a remarkable career and contribution to the sport. We wish you all the very best in the future!