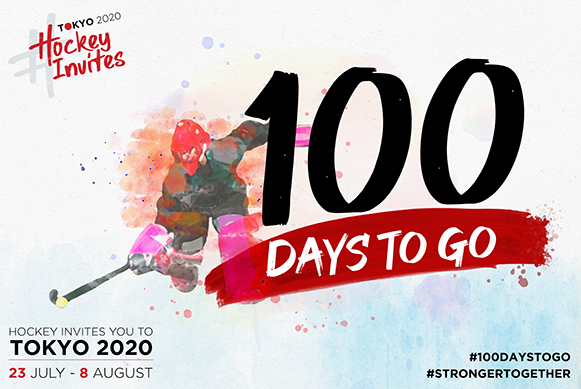 100 Days To Go: Countdown to the Olympic Games Tokyo 2020 continues!

The countdown to the hugely anticipated Olympic Games Tokyo 2020 reached another important milestone on Wednesday 14 April, a date which signifies 100 days to go until the start of the greatest multi-sport event on earth.

Numerous activities are taking place to mark the occasion today, including the reveal of a giant set of Olympic Rings on top of Mount Takao, around one hour travel-time away from downtown Tokyo in the city of Hachiōji. The Olympic Games are getting ever closer, and the excitement is building for the billions of sports fans all around the world, not to mention all of the athletes who will compete in Japan.

In recent weeks, Sakura Japan and Samurai Japan – the men’s and women’s national hockey teams of the host nation – have been playing their part in the build-up to the XXXII Summer Olympiad. As we recently reported, Sakura Japan – also known as the Cherry Blossoms – have been involved in the Tokyo 2020 Olympic Torch Relay, carrying the Olympic flame through Kakamigahara city in Gifu prefecture, a key location for hockey in Japan.

“It was a wonderful experience”, said Sakura Japan athlete Hazuki Nagai, speaking exclusively to FIH. “Before the torch relay, we all were excited to be representing Japan Hockey. During the torch relay I felt emotional and excited. It was a one-time thing and I know that I will never experience the same thing again.”

An occasion steeped in tradition and history, the Olympic Torch Relay always manages to capture the imagination, not just of the public but also the athletes. Speaking on the Episode 6 of HockeyPod, the FIH’s monthly podcast which will be available to download on Thursday (15 April), Argentina icon and 2017 FIH Player of the Year Delfina Merino expressed her excitement about following the Olympic flame on its 121-day journey across all of Japan’s 47 prefectures, and how she keeps track of its progress on social media.

Japan’s Samurais have also been involved in the build-up, taking part in the ‘Let’s 55 Virtual Experience’, a fascinating and innovative project from the Tokyo 2020 organisers. Covering all 55 sports that will feature at Tokyo 2020, the project uses specially fitted cameras to provide the viewer with an idea of what an athlete sees when they are playing their sport. The Samurais – who like Sakura Japan are the current champions of Asia – put their incredible skills to good effect, producing clips showing 3D dribbling, penalty corners from the perspective of the flicker, trapper and goalkeeper and much more. To see the video, click here.

When asked by Tokyo 2020 what makes Hockey so appealing, Samurais player Ohashi Masaki, who was heavily involved in the training session where the footage was filmed, said: “The ball travels very fast in hockey, and even I feel it as a player. The ball travels especially fast when taking a shot at goal. Unlike football, there’s no limit to the number of substitutes a team can make, so players can use up their energy on the field, be replaced, recuperate, and go back on the field again. The players on the field are always refreshed and ready so they run fast and play the game at incredible speed. That’s what’s so great about hockey.”

Regarding his team’s ambitions for Tokyo, Ohashi said: “Of course I would like us to win the gold medal at the Tokyo 2020 Games, but I also hope the Games would help promote hockey as well. ‘Samurai Japan’ is known for great teamwork. Whether it’s defence or offence, the whole team participates and supports each other. Rather than dribbling your way forward in offence, we pass the ball around. In defence, if the opponent dribbles past one of our guys, there’s always another guy, then a third guy trying to stop him. I hope everybody will notice how we work as a team.”

You can listen to the sixth episode of FIH's podcast - Hockey Pod - featuring Argentina star and co-host Delfina Merino,  who also discusses her excitement about the Tokyo Olympic Games; mother-to-be Camila Caram tells about her future plans, while Sharne Mayers chats about her fascinating sporting life here