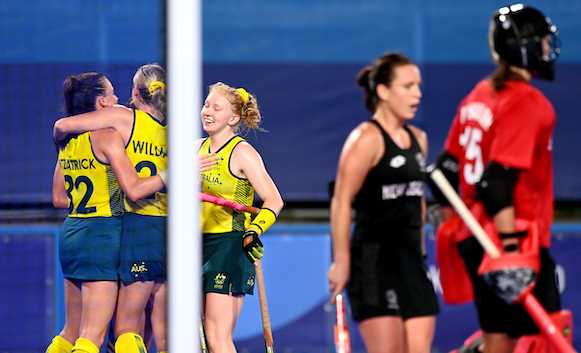 Day 6 (Evening): The Netherlands and Australia maintained their 100% winning runs in the women’s Hockey competition at Tokyo 2020, ending Day 6 at the top of their respective pools after another pulsating evening of action at the Oi Hockey Stadium.

Both teams have earned a maximum 12 points from their four matches, with the Dutch earning a 1-0 Pool A win against reigning Olympic champions Great Britain – a rematch of the Rio 2016 gold medal game - before Australia also ran out 1-0 victors, defeating Pool B rivals New Zealand in the Oceania derby match.

Also in Pool B, Argentina joined Australia in the competition quarter-finals thanks to a hard-fought win over Japan, a result which ended the Cherry Blossoms hopes of reaching the knock-out stages of the competition.

Spain 2-0 China
Spain’s hopes of securing a place in the competition quarter-finals received a huge boost thanks to a 2-0 win over China, a result which moved the Red Sticks onto six points to keeps their qualification future very much in their own hands. Should Spain claim at least a point in their final Pool B match, against Japan on Saturday (31 July), their place in the knock-out stages will be confirmed. China, who have three points, need both a big victory over New Zealand in their final pool match and for other results to work in their favour if they are to progress.

A brilliantly worked penalty corner put Spain into a 3rd minute lead, with Beatriz Perez touching home an intricate yet effective routine. China pressed hard for an equaliser in the latter stages of the first quarter and early in the second before being hit by a Spanish sucker punch, with Berta Bonastre finishing off a counterattack from close range. That strike knocked the wind out of the sails of the China team, who struggled to recover and failed to register a single shot on target against their opponents from Spain, who were well worth their victory.

It was a milestone match for umpire Michelle Meister of Germany, who took charge of her 100th international to earn her Golden Whistle.

Japan 1-2 Argentina
Delfina Merino marked her 300th international appearance by creating the winning goal as Argentina sealed a place in the competition quarter-finals, defeating host nation Japan in a tightly contested encounter. Las Leonas now have taken nine points from an available 12 in Pool B to stay very much in the running for a high finish ahead of the cross-over quarter-finals. For Japan, the defeat means that they can no longer qualify for the knock-out stages.

Agustina Gorzelany’s low penalty corner drag-flick put Las Leonas ahead ten minutes into the first quarter, but Japan – who competed throughout – pulled level when Kanon Mori forced home from close range early in the second period. The winning goal arrived at the end of the third quarter, with star attacker Merino playing a clever reverse pass for Maria Granatto to fire into an open goal. The Cherry Blossoms gave it everything in the final 15 minutes to rescue something from the game, but it was to no avail.

New Zealand 0-1 Australia
Australia’s admirable form in Tokyo continued, but they were made to work incredibly hard for the points in a typically close contest with Oceania rivals New Zealand. Australia are three points clear at the top of Pool B with all of the teams having played four matches each. Australia face Argentina in their final pool match, with only a heavy defeat being enough to stop them from winning the pool.  The Black Sticks ended the day third in the standings, and face China in their final pool match.

Australia certainly dominated the statistics, recording more possession, circle entries, penalty corners and shots on target, but as always, they numbers do not tell the entire story as these two great rivals cancelled each other out for long periods. The winning goal arrived four minutes after half time, with Emily Chalker getting ahead of her marker to connect to a cross from the right to guide a brilliant deflection into the roof of the New Zealand net.

Commenting on her goal, Emily Chalker said: “It was turn up in the right place at the right time. It was a bit of a natural instinct, I did not have much time but we do a lot of training around the goalmouth and guess that training paid off. Just natural instinct, quick reaction and getting in the right place at the right time. You don’t get a lot of opportunities in a game so you have to be ready when they pop though like that.”

Great Britain 0-1 Netherlands
The Netherlands emerged triumphant in the re-match of the Olympic gold medal match from Rio 2016, defeating defending champions Great Britain 1-0 thanks to a penalty stroke from Frederique Matla.

It was a fourth straight win for the Dutch, who have only conceded one goal in the competition thus far, scoring 15. The Netherlands remain top of Pool A with Great Britain in third place, the two teams having both played one more game than fellow pool competitors Germany, Ireland, India and South Africa, who are all in action on Friday (30 July).

Great Britain provided the Netherlands with their sternest test of the competition and certainly had their chances against the reigning World, European and FIH Hockey Pro League champions, although GB were indebted to their goalkeeper Maddie Hinch, who produced numerous exceptional saved to keep her team very much in the contest. However, even the magnificent Hinch – who, with help from her defenders, repelled all ten of the Dutch penalty corner opportunities – could do nothing about the goal, with Matla confidently flicking home from the spot to take the Netherlands onto 12 points from four games.

Commenting on the performance of Maddie Hinch, GB player Sarah Jones said: “It is huge to have the best keeper in the world in the net. You have that belief when she is between the posts. It was an inspired performance.”

On Friday (30 July), the pool phase of the men’s competition will come to an end, with the line-ups for the quarter-finals being finalized. All twelve competing men’s nations will be in action. There will also be two matches from Women’s Pool A, with South Africa playing Germany and Ireland taking on India.

Make sure that you use #Tokyo2020, #Hockey, #StrongerTogether, #HockeyInvites, @Tokyo2020 and @olympics on social media when showing your support for your nation. Be sure to follow FIH for all the latest updates as teams and fans get ready for the biggest show on earth – the Olympic Games.