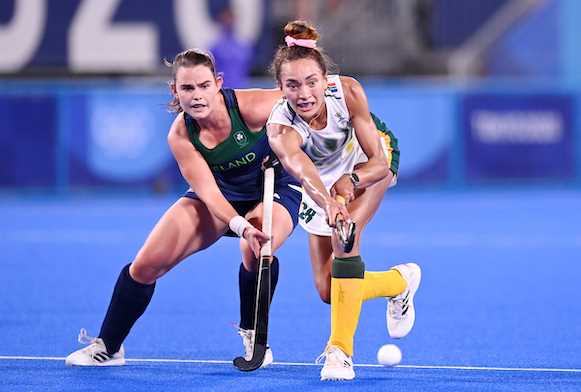 Day 1 (Evening): It was a joyous Olympic debut for Ireland’s women, who marked their first ever Olympic hockey match with a 2-0 victory over Pool A rivals South Africa in Saturday’s evening session. The Netherlands women were also winners in Pool A, while the men of Great Britain and Germany both got their Pool B campaigns off to a winning start. More information on the matches can be found below.

“It wasn’t perfect today, but it’s always good to win the first match of any tournament”, said GB’s Waller. “We’re really looking forward to building on this performance ahead of our next match against Canada.”

Canada 1-7 Germany
European silver medallists Germany stormed to a 7-1 victory over Canada in their opening match, with Lukas Windfeder and Christopher Rühr both netting braces. Windfeder opened the scoring in the 11th minute before Canada’s Keegan Pereira restored parity early in the second quarter. However, Rühr and Windfeder took the score to 4-1 ahead of half time before Martin Häner, Niklas Bosserhoff and Mats Grambusch completed the match scoring.

"We wanted to push through”, said Germany ace Rühr. “We told each other we want to go (hard for) 60 minutes. Not 40, not 35 - we want to go the whole game because tomorrow we have a free day. And in the final few minutes we scored a few goals which is always a good feeling - 7-1 is a great result.”

Netherlands 5-1 India
Reigning World, European and FIH Hockey Pro League champions the Netherlands overcame stubborn opposition in the shape of India to take all three points with a 5-1 victory. Felice Albers put the Oranje ahead early with a close-range finish before India captain Rani tore up the script, netting with a speculative strike from the edge of the circle. The score remained tied at 1-1 until a three-goal blitz from the Dutch put the result beyond all doubt, with Margot van Geffen, a second for Albers and a fine backhand strike from Frederique Matla took the score to 4-1. The scoring was completed by Caia van Maasakker, who bagged a trademark penalty corner.

Talking about scoring her first Olympic goal in her third Olympics, Margot van Geffen said: "Finally. After a long time. It's cool, it's a great start but it's not what I'm here for. You know what I'm here for. It's a good start, a 5-1 win, and now we get ready for the next game."

Ireland 2-0 South Africa
Ireland wrote another famous chapter in their wonderful recent history by beating South Africa on their Olympic debut. The Green Army took a 2-0 win over the African continental champions to make a dream start to their first ever Olympic title challenge. It was a dominant display from Ireland, who took the lead in the first quarter thanks to Roisin Upton’s perfectly placed penalty corner drag-flick. Sarah Torrans ensured victory for her team with an instinctive overhead volley, finding a way past onrushing goalkeeper Phumelela Mbande.

Ireland goal-scorer Sarah Torrans said: "It's such a relief to get a win there. We're just here, having a load of fun and dreaming of being in the Olympics and to finally get over the line in our first game is incredible. It's just great to get a good start.”

The pool action continues on Saturday 25 July with a further eight matches, four in each of the women’s and men’s competitions. Women’s Olympic champions Great Britain begin their title defence against Germany in the day’s opening match, with Pool B meetings between Japan and China, Australia and Spain, and New Zealand and Argentina also scheduled in the morning session at the Oi Hockey Stadium. The evening matches all take place in the men’s competition, with Pool A frontrunners India and Australia going head-to-head. Spain versus New Zealand and Japan versus Argentina complete the men’s Pool A roster, with South Africa and the Netherlands meeting in men’s Pool B.