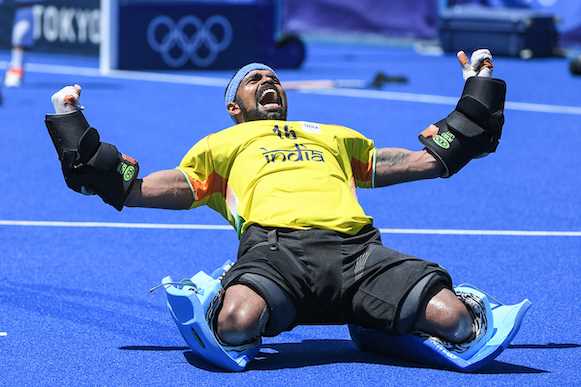 Day 13 (Morning): India have claimed an Olympic medal for the first time since winning gold at Moscow 1980, beating Germany 5-4 in one of the most dramatic bronze medal matches in Olympic history.

India fought back from 3-1 down to claim a sensational 5-4 victory over Die Honamas to seal their place on the podium this evening, with goals from Simranjeet Singh (2), Harmanpreet Singh, Rupinder Pal Singh and Hardik Singh denying Germany a medal at a fourth successive Olympic Games (Gold: Beijing 2008, London 2012, Bronze: Rio 2016).

Timur Oruz put Germany into the lead just two minutes into the contest after India failed to clear their defensive lines before Simranjeet Singh levelled the scores early in the second quarter with a fierce backhand strike.

Simranjeet’s effort was the first of five goals in the second quarter, with Germany dominating to open up a fully deserved 3-1 lead thanks to goals from Niklas Wellen and Benedikt Furk before India hit a quick-fire double through Hardik Singh and the exceptional Harmanpreet Singh to take the score to 3-3 at half time.

India’s momentum was not interrupted by the half time break, with Rupinder Pal Singh scoring a penalty stroke before Simranjeet Singh chipped home a fifth to put the eight-times Olympic gold medallists into a commanding 5-3 lead going into the final quarter.

Germany have proven time and time again that they never know when they are beaten, and set about the task of attempting a comeback with typical determination. They reduced the deficit 12 minutes from time when Lukas Windfeder slammed home a low penalty corner, setting up a dramatic climax to the contest.

Die Honamas threw everything they had at their opponents, and were given one final chance to salvage the contest when they were awarded a penalty corner with just six seconds remaining. However, the drag-flick from the top of the circle was brilliantly saved by India goalkeeper PR Sreejesh, becoming the hero that sealed India’s bronze medal here at the Olympic Games Tokyo 2020.

"That is something which I never felt in my life until today", said Sreejesh after the match. "That's a great feeling. I think I need to go back to my home to realise what it is actually. Just waiting for that. I just called my dad because he was the reason behind me being here and I just wanted to tell him that I achieved it."

India captain Manpreet Singh said: "I don't know what to say right now. It was fantastic, the way we played today. I think we deserved this medal as we have worked so hard, and the last 15 months has been so difficult for us, being in Bangalore away from our families. From the whole team and the coaches we would like to dedicate this medal to our doctors and front-line warriors who have been checking us and saved so many people's lives in India."

It was a heart-breaking finish to the contest for Germany and their legendary captain Tobias Hauke, with the double Olympic gold medallist unable to add a second bronze to that which he collected at Rio 2016 during the final match of his extraordinary playing career.