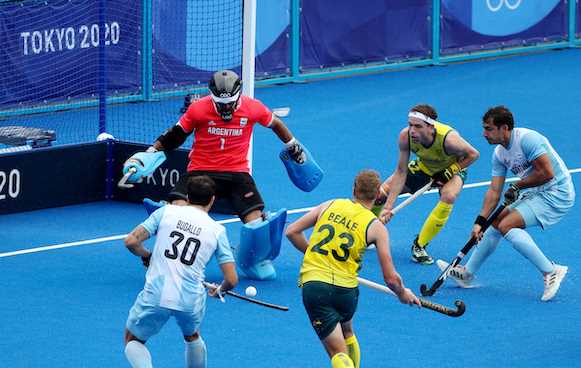 Day 4 (Morning): Australia’s stranglehold of Men’s Pool A continued with another superb display to see off the challenge of Rio 2016 gold medallists Argentina, with India men also claiming an important three points while Japan and New Zealand could only draw. In Pool B, Germany put their title campaign back on course with a triumph over the previously unbeaten Great Britain.

Argentina 2-5 Australia
Australia continued their fine Tokyo form with another thumping win, defeating reigning Olympic champions Argentina 5-2 to take their Pool A points tally to a maximum nine from three matches. The Kookaburras are now certain of a place in the quarter-finals, and have scored a remarkable 17 goals.

Los Leones made a strong start, snatching a first quarter lead thanks to Jose Tolini’s fine penalty corner drag-flick. However, Australia soon found their rhythm, with a double for Blake Govers – his fourth and fifth of the competition – complementing strikes from Tom Wickham and Lachlan Sharp as the world number ones opened up a 4-1 half time lead. Jeremy Hayward rattled home a fifth with a third quarter penalty corner, with Argentina’s Maico Casella netting a late consolation for the Rio 2016 gold medallists.

Commenting on being at the top of Pool A with a very healthy goal difference, Kookaburras’ attacker Govers said: "We've still got two games to go (in the pool stage) so we've got a lot of improvement to do and a lot to work on, so that's pleasing for us."

Argentina goalkeeper Juan Vivaldi said: "In the general balance we played two quarters really well but in the second quarter we made a lot of mistakes. We missed so quickly and so fast the ball and Australia created a lot of chances to score a lot of goals and of course the difference was too great to recover from."

On Wednesday 28 July, Australia take on Oceania rivals New Zealand, while Argentina – who have four points - aim to keep their quarter-final ambitions on track when they face India on Thursday.

India 3-0 Spain
On a milestone day for Birendra Lakra (200 caps) and Amit Rohidas (100 caps), India recorded their second win of the competition with strong performance against Spain. It was the perfect response to their recent 7-1 defeat at the hands of Australia, bouncing back in style to remain on-track for a quarter-final berth with six points.

Defeat keeps Spain outside of the top four places in the pool, something which they will need to rectify in their final two pool matches if they are to progress into the knock-out phase of the competition.

"Yesterday was a bad day and today we bounced back”, said India goalkeeper PR Sreejesh. “That's most important because if you can forget the past match and bounce back to play a better game, that's most important for a game like at the Olympic Games.”

Japan 2-2 New Zealand
Hosts Japan scored two of the best goals yet seen in the men’s competition but it proved only enough for a solitary point, tying an absorbing encounter against New Zealand 2-2.  New Zealand finished the day sitting third in the standings, with the Samurais in fifth position.

Koji Yamasaki put the hosts in front with a dazzling run down the left before lifting the ball between Black Sticks goalkeeper Leon Hayward and his near post. New Zealand levelled thanks to Nick Wilson’s penalty corner follow up, but Kenta Tanaka’s sensational third quarter goal – running three quarters of the length of the field in possession before slotting home – restored Japan’s lead in the third period moments after New Zealand’s Kane Russell missed a penalty stroke. The Black Sticks were not to be denied a share of the spoils, however, with Sam Lane earning his team what might prove to be a valuable point with a deflected penalty corner drag-flick.

"I'm a bit emotional at this moment because our team so did very well and we couldn't bring it home”, said Japan head coach Siegfried Aikman. “We deserve so much more today and it's the third match in a row that we played so well and then we really want to go to the quarter-finals.”

Referring to Kenta Tanaka’s wonder-strike, New Zealand’s Blair Tarrant said: "We knew he can do that and he's good at doing that so it's really important we stop him early. It's pretty obvious looking at that clip now, looking at the video, we had to stop him far earlier than we tried to."

Germany 5-1 Great Britain
A hat-trick from London 2012 Olympic gold medallist Florian Fuchs helped Germany to their second win of the competition, inflicting a 5-1 defeat on the previously unbeaten Great Britain. The result leaves three teams tied on six points at the top of Pool B, although both Germany and Great Britain have played one game more than Belgium, who are in action this evening.

Phil Roper put GB ahead early with a fierce strike from the top of the circle but Die Honamas restored parity seconds later with a diving penalty corner deflection. Christopher Rühr’s brilliant flick into the roof of the GB net put Germany ahead, and it was a lead that they would not surrender, with Justus Weigand and a late double from Fuchs completed a comprehensive victory.

After the game, GB head coach Danny Kerry said: "We simply weren’t at the races first half and were lucky to go in level. The second half was ironically more purposeful but a card against us killed the momentum and Germany capitalised. The step up in level from our previous matches was the lesson we needed. We will need to take that lesson.“

The evening matches are also from the men’s competition, with both matches in Pool B. Reigning World and FIH Hockey Pro League champions Belgium will be looking for a third straight victory when they take on African continental champions South Africa, with the European champions Netherlands playing Canada as the race for places in the quarter-finals gathers pace.