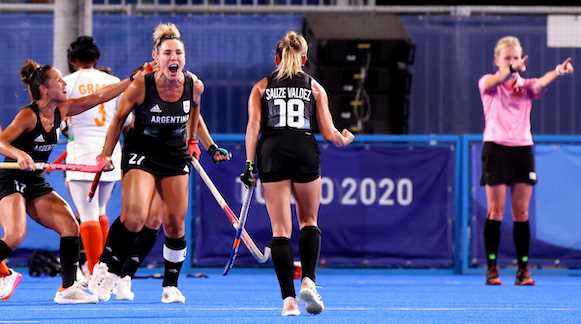 Tokyo 2020: Argentina and the Netherlands to fight for women's Olympic gold medal

Day 12 (Evening): Argentina overcame a magnificent challenge from underdogs India to book their place in the Olympic gold medal match, with 37-year-old captain Noel Barrionuevo rolling back the years by scoring two penalty corner drag-flicks to guide her team to victory.

India – who finished fourth in Pool A but stunned highly-rated Australia in the quarter-finals with a 1-0 win – took the lead inside the opening two minutes when Gurjit Kaur rattled the backboard with a superb penalty corner drag-flick. However, it was the contribution of veteran defender Barrionuevo that proved decisive for Las Leonas, firing her team into their third Olympic final.

Argentina’s opponents in the gold medal match – which takes place on Friday 6 August at 19:00 Japan Standard Time (UTC/GMT +9) – will be the Netherlands, who are now just one win away from being in possession of the World, European, FIH Hockey Pro League and Olympic titles. Fascinatingly, Argentina were the last team to beat the Netherlands, inflicting defeat on the Dutch during their FIH Hockey Pro League encounter in Buenos Aires in February 2020, with the Oranje claiming a 3-1 victory the following day.

The Netherlands booked their ticket to the final with yet another dazzling display at the Oi Hockey Stadium, overpowering Rio 2016 gold medallists Great Britain 5-1 in this morning’s first semi-final. It is a fifth successive Olympic final for the Oranje, giving them a chance to claim their fourth Olympic crown against the team that they defeated to the gold medal at London 2012.

The bronze medal match will also take place on Friday 6 August, with Great Britain and India going head-to-head at 10:30 JST.

Whilst it was the hugely experienced Argentina who ended up taking the victory in this evening’s second semi-final, India were outstanding against their illustrious opponents from start to finish. Gurjit Kaur’s stunning penalty corner drag-flick goal put them into a lead that was perhaps unexpected by many, but one they proved well worth thanks to an excellent first quarter display.

Argentina pulled themselves level when Noel Barrionuevo produced the kind of goal she was famous for a decade ago, sending an unstoppable penalty corner drag-flick rocket to the right of India goalkeeper Savita.

Barrionuevo struck again six minutes into the third quarter, although there was more than an element of fortune about her second goal, which clipped the shinpad of an India player to completely deceive Savita before nestling into the corner. It was Barrionuevo's 197th international goal in 344 appearances for her country, but few have been as important.

India – who were rarely outplayed by the South American giants – came agonisingly close to equalising with just 20 seconds of the match remaining, as Navneet Kaur guided a deflection towards the bottom left corner only for Argentina goalkeeper Belen Succi to make a brilliant save, kicking out her right boot to put Las Leonas into the gold medal game.

"I think we were prepared to have a match like this", said Argentina's Agustina Gorzelany. "We knew that India was going to do their best until the end, they reached the semi-final so that means they are a great team too. But I think, if you look throughout the tournament so far (and the fact the team improved each game), we just needed to win. That was the most important for us. And we did it."

Looking ahead to the bronze medal match, India captain Rani said: "The tournament is not over yet. We still have a chance to win a bronze medal and we will see what we can work on and go into the match with a different mindset. An Olympic medal is a medal. If you win gold that is nice but still bronze is a medal, so we will fight for that medal and we will focus on the next match."

On Thursday 5 August, the men’s Hockey competition at the Olympic Games Tokyo 2020 will come to a climax, with the winners of the bronze, silver and gold medals being revealed. The bronze medal match between Germany and India will be played on Thursday 5 August at 10:30 JST. Germany will be aiming to match the third place finish they achieved at Rio 2016, with India looking for a first Olympic medal since Moscow 1980. The match will be umpired by Simon Taylor (NZL) and Adam Kearns (AUS), with Lim Hong Zhen (SGP) and Jakub Mejzlik (CZE) being the reserve umpire and video umpire respectively.