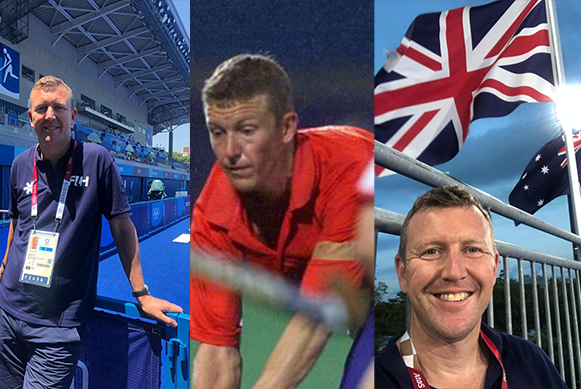 "The highest level of tournament hockey we have ever seen"

Double Olympian with Great Britain’s hockey team – in 2000, where he even captained the team, and previously in 1996 – Jon Wyatt (195 international caps) joined the International Hockey Federation as Sport Director in 2018. Present in Tokyo, he gives his analysis of the Tokyo 2020 hockey events from a sport and technical perspective.

What is your overall technical assessment of the hockey showcased during the Tokyo 2020 hockey events?
Jon Wyatt: The level of hockey across both competitions has been consistently the highest level of tournament hockey we have ever seen. The physical strength, speed and fitness of the athletes is beyond anything we have seen before, and the way they were prepared and able to continue to play at such a high level in temperatures exceeding 40 degrees and with 85% + humidity, was amazing. The skills on show and the ability to continue to execute skills perfectly even in the final seconds of the matches again showed the level of preparation all of the teams had undergone. On top of these physical attributes, the mental strength and team togetherness shown by so many teams who came back from being behind in matches, or won matches following defeats in a previous match, showed how well prepared they were mentally as well. And all of this during the huge challenges that the COVID-19 pandemic has caused for us all. Athletes have had to spend long periods of time away from friends and family, weeks in hotels self-isolating in order to travel, and in many cases, the usual Olympic preparation has been significantly disrupted with only a handful of preparation matches being possible in the final months.

Have you noted some new trends? Or a confirmation of certain elements of the game which teams have focused upon in recent years?
Jon Wyatt: As athletes have got fitter and defensive structures improved, the coverage of the pitch when defending by all teams has been fantastic. The way to unlock these defenses and find space on the field by using aerial passes is a trend that has grown in recent years but was taken to a new level in this tournament. All players are able to identify space and then deliver aerial passes, eliminating defenders, sometimes over 20m-30m, and at times using up to 60m passes. The receiving of these aerial balls, by attackers and defenders alike, has also vastly improved and it is now rare to see an aerial ball not controlled by the receiver, and more common to see such a pass creating a shooting opportunity and in some cases a spectacular goal.

It is often said about such events that you can’t have a 100% correct assessment of a team performance after the Pool stage because from the quarter-finals on, the context is quite different. What makes the difference in the “do or die” encounters?
Jon Wyatt: The format of the Olympic Games, with a Pool stage followed by a knockout stage, certainly leads to a competition of “two halves”. The Pool stages are important as they set up the potential route to a semi final and final, so finishing high up in the pool is really important. As we saw in the men’s competition, the 2 teams that topped the pools (Belgium and Australia) went on to reach the final, whereas those that did not perform to their best in the pool stages ultimately didn’t make it all the way to the final. That said, there are obviously no guarantees in the knockout stages and despite winning their pool, the Australian women came up short and lost their quarter final to the inspired Indian women’s team. We saw last minute goals and shootouts deciding which team progressed to the next round, and even for the men, the destination of the Gold medal. In the knockout stages, there are no second chances. History counts for nothing and when it comes to the top 12 teams in the world, anyone can beat anyone in a oneoff encounter (as the inspirational South African men showed against Germany during the pool stage!).

Teams from four different continents were involved in the semi-finals. What does it mean in terms of the globalisation of hockey?
Jon Wyatt: It is a brilliant outcome for hockey and shows the true international and global growth of the game. This is the first time that 7 different countries from 4 continents have been represented in the semi-finals, and to have medalists returning to each of those continents to spread the joy of hockey can only be good for the game. At the individual club, national, continental and international level, we all now need to capitalize on these inspirational stories and teams, by providing opportunities for newcomers to try hockey and fall in love with our beautiful game.

Other nations such as Japan or South Africa did not make it to the quarter-finals. However would you agree that they showed they can absolutely compete with the teams who did qualify? And if yes, why?
Jon Wyatt: By definition, not every team can make it to the quarter finals, but all 4 teams in each gender who did not qualify certainly showed they deserved to be in Tokyo and at times were the equal, and sometimes superior, of their opponents. The South African men’s forwards have fantastic talent, scoring 4 against the Olympic Champions Belgium and of course defeating Germany, briefly raising them into the top 10 in the World Rankings for the first time ever, and ultimately seeing them ranked 12 after the Olympic Games (up from 14 beforehand). Both Japanese teams, winners of the 2018 Asian Games, also showed moments of brilliance and more than matched the top teams in the world for long periods.

As usual, a few umpiring decisions were debated. But looking at the bigger picture, what do you think about the overall performance of the umpires in Tokyo?
Jon Wyatt: Just like every athlete, the appointed umpires and Officials have spent years training, working and improving to become the very best hockey officials in the world. They have spent long periods of time away from their friends and family, and had to cope with the restrictions of COVID and the lack of matches to prepare in their usual way, but every one of them has shown incredible commitment and dedication to be here in Tokyo. They are all volunteers, taking time out from work and their careers to facilitate the great matches we have seen, without financial compensation and in many cases incurring significant costs to follow their Olympic dreams. The pressure to perform and the analysis of every decision they make is far greater than even for athletes, and the criticism they have to endure for even the smallest mistake tests their mental strength to the limit. There is not an athlete in Tokyo who has had a perfect competition without a mistake, and yet this is what the athletes, coaches, social media hockey fans and critics around the world expect of every umpire, in every match. Of course, that is what they strive for, but as in all sports, hockey matches cannot take place without umpires and officials, and the effort and pride each and every one of them puts into their performance is humbling to witness. They are the best in the world, and like the athletes, they deserve to be congratulated and to be rightly proud of being selected for the Olympic Games, and for their excellent performance throughout the competition.

To conclude, what comments did you hear about the turf?
Jon Wyatt: All 4 turfs, the 2 competition pitches and the 2 training/warm up pitches, have been outstanding. They have allowed the athletes to showcase their remarkable skills and the speed of the modern game. In addition, the sustainability credentials of the turfs (made from 60% bio-plastic and requiring 40% of the amount of water that was required in previous Games), mean we can be rightly proud of contributing to the wider environmental targets of the Tokyo Olympic Games. These 4 turfs will be left in Japan as part of the hockey legacy, for the Japanese hockey community to enjoy for years to come.

The final word must go to the organisers and to the army of volunteers, for whom nothing was ever too much of an ask. To have put on an Olympic Games during a pandemic, with all of the additional logistical and medical challenges this has brought, is nothing short of a miracle. And all with a smile on their faces. To everyone involved in the organisation of the Tokyo Olympic Games and the hockey competition in particular, on behalf of the FIH and every member of the hockey family from across the globe, we say to our Japanese friends from the bottom of our hearts, “Dōmo arigatōgozaimasu”!