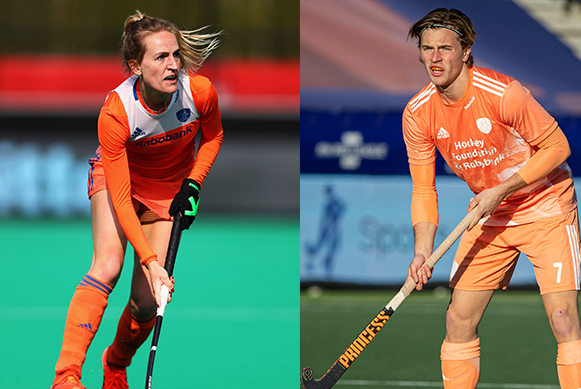 A true global hockey superpower is the subject of our latest Olympic spotlight, with the Netherlands men and women looking to add an Olympic gold medal to the European titles that they both claimed in June.

They may not be the reigning Olympic champions, but the Netherlands women are without question the team to beat at Tokyo 2020. Head coach Alyson Annan, the legendary former Australia international, double Olympic gold medallist and two-time FIH Player of the Year, has created a team very much in her own image: a perfect balance of outrageous talent, discipline and an unbreakable winning mentality. The team has been almost unstoppable in recent years, claiming the 2018 Women’s World Cup before becoming both FIH Hockey Pro League and European champions in 2019 and 2021. Can anyone stop the dazzling Dutch from reclaiming their Olympic crown?

Led by globally respected head coach Max Caldas, the former Argentina international who coached the Netherlands women to Olympic and World Cup glory, the Netherlands men are a phenomenally talented team capable of beating anyone on their day. Their sensational run to the final of the Odisha Hockey Men’s World Cup Bhubaneswar 2018 ended in defeat to Belgium but reconfirmed their status as one of the very best hockey teams on the planet. The Netherlands – who recently became European champions for a sixth time, defeating Germany in the competition final – reached Tokyo through the 2019 FIH Hockey Olympic Qualifiers, battling powering to a 6-1 win over Pakistan in Match 2 after the first game in Amstelveen finished 4-4.

Ahead of their respective Olympic title challenges, we caught up with Lauren Stam and Jorrit Croon to talk about the Games as well as their recent successes at the Euros.

Lauren, Jorrit, thank you so much for talking to us! Before we start talking about Tokyo, we have to reflect on the Euros in Amstelveen. Lauren, it was a fantastic event, not only for the two Netherlands teams but also for the fact that we saw the return of the fans – it must have been a very special experience.
Lauren Stam: “Yes. For the first game I was looking around the stadium for like five minutes! It was amazing. I guess it was almost two years ago [since we had fans], so it was quite a new experience again. It was amazing. Also with Dutch fans, it was even better.”

How was it for you, Jorrit? Obviously going into Tokyo on the back of winning the Euros is a huge boost for the team, but the event was so much more than that.
Jorrit Croon: “It was such a great experience to play for a Dutch crowd again. Like Lauren said, the moment you experience the fans for the first time again, walking on the pitch with a stadium full of fans, it was a really nice experience.  We played some Pro League games without the fans, and it was quite a boring setting without anyone cheering, so it was really good to have fans back, especially the Dutch fans who made a great atmosphere there in the Wagener Stadium”

Looking ahead to the Games now. Clearly both of your teams have big targets, and rightly so. Lauren, as reigning World, European and FIH Hockey Pro League champions, your team will be regarded as favourites, but that will mean little to you. It is clear to everyone that complacency isn’t in the DNA of this Netherlands team – neither the players nor head coach Alyson Annan would allow it. Is that a fair assessment?
Lauren Stam: “Yes, of course. We just have to be our best in every game, and work really hard, not expecting [anything]. We will take every game as it comes and go through the tournament like that.”

In Pool A, your team face reigning Olympic champions Great Britain as well as Germany, who you defeated in the recent EuroHockey final, India and South Africa. What are your thoughts about the pool?
Lauren Stam: “It is a tough pool, but the other pool is also tough. All of the opponents are great opponents. Of course, we are going for first place and to do our best in the pool. That is the goal in the first phase of the tournament.”

And Jorrit, the Netherlands men compete in Pool B against Belgium, Germany, Great Britain, Canada and South Africa. Your recent form suggests the team will feel confident about your chances of topping to pool in order to secure a good fixture in the quarter-finals.
Jorrit Croon: “I think in our pool and the other pool, all of the opponents are really good teams. Internationally, all the teams are really close and play at such a high level, like we saw at the last Euros. We drew with Germany and Belgium and then drew with Germany again [in the final], so I think that shows how close teams are. I think it will depend on the shape of the day, and maybe if some player will stand up [and perform]. It is all about the details, I think. We are going to try to manage that as good as possible. Of course, the confidence boost of the Euros will help us a lot. But when we are in Tokyo, the Euros won’t count anymore. We will have to prove again that we are in a good way, show a good game and the best of ourselves. I think it will be a really nice Olympics because of how close the teams are.”

Staying with you, Jorrit. With head coach Max Caldas stepping away at the end of the Olympics – and a genuine Dutch legend in Jeroen Delmee taking over – I am sure Max would love to end on a high by taking that gold medal! What would it mean to you to if you did?
Jorrit Croon: “It is quite funny because Max has been my head coach for all of the time I have played for the national team. For me [personally], I really want to end the period of Max in a really good way. If it ends with a gold medal that would be fantastic. But we just want to show our best game and see where it ends. Hopefully with a gold medal, or another Olympic medal, that would be great. I have a very special connection with Max, because he let me play my first cap at the age of 17. He was confident enough in me to let me play at such a young age, so I definitely owe him something. I really want to pay him back, hopefully with a gold medal.”

And Lauren, the Dutch women have such an illustrious record at the Olympics. I’m sure you’d love to write your name in the history books with this group. What would it mean to you, to win an Olympic gold medal?
Lauren Stam: “It will be my first Olympics, so a gold medal would be amazing. Of course, a few of the girls already have one gold medal [from London 2012]. I’ve asked them many questions about what the Olympics are like, and what can I expect. But to win an Olympic gold medal, that would be amazing.”