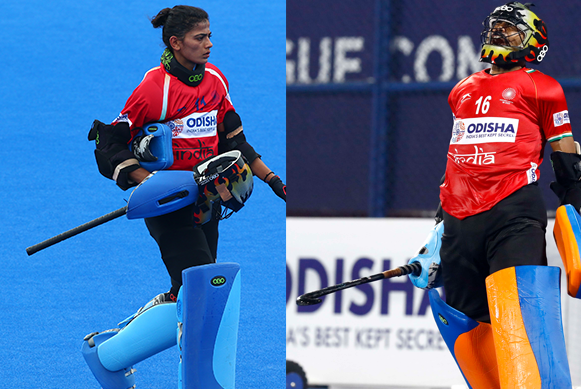 In the latest of our Olympic Spotlights series we focus on India, one of the most famous hockey playing nations on earth.

It has been over 40 years since India men claimed the most recent of their incredible eight Olympic hockey gold medals. However, their superb form in recent times makes them serious contenders to claim a ninth title at the upcoming event in Tokyo. The team has claimed victories against nearly all of the top teams in world hockey over the past couple of years, with Australian-born Head Coach Graham Reid getting the best out of a talented and exceptionally fit collection of athletes. India booked their ticket to Tokyo with two victories over Russia in the 2019 FIH Hockey Olympic Qualifiers, winning 4-2 and 7-1 in Bhubaneswar.

India women, coached by Dutchman Sjoerd Marijne, have been making steady progress in the past few years, moving up the FIH World Rankings as well as making the cut for the major events. Rio 2016 was India’s first Olympic appearance since 1980, and The Eves are back again for a second successive Games here at Tokyo 2020. They earned their place in dramatic fashion through the 2019 FIH Hockey Olympic Qualifiers, claiming a thrilling 6-5 aggregate victory over USA in Bhubaneswar. Having won the opening game 5-1, India found themselves 4-0 down to the Americans in Match 2 before team captain Rani fired home a stunning fourth quarter strike to secure that all important ticket to Tokyo.

Ahead of their respective title challenges at the Olympic Games Tokyo 2020, we caught up with goalkeeping aces PR Sreejesh – who will compete in a third Olympic Games – and Savita – who will feature in her second – to get the low-down on how the teams were shaping up.

PR Sreejesh and Savita, two long time servants of your respective India national teams, thank you both so much for talking to us! Sreejesh, your team must be very excited about heading to Japan in the quest for that gold medal.
PR Sreejesh: “Definitely, it’s been a long time. We have been dreaming about this Olympics because, as you know, it was supposed to happen last year. Now we are almost there, and we have announced our team, so I am super excited to join this bunch of youngsters to play the upcoming Tokyo 2020 Olympics. It’s interesting because it will be very different to previous Olympic Games. Before it was like a festival, a place where you could meet up, catch up and enjoy each other. But now, everyone will be a bit more aware of their safety, to ensure that they don’t test positive and stay in the tournament. It is a really great honour to be part of this team, playing in the Tokyo Olympics.”

And you Savita, how is the women’s team feeling, as we get close to the Games?
Savita: “We are waiting for that moment. It was the same last year. We knew that the Tokyo Olympics was coming but it didn’t happen because of covid. So, it has been one year more that we have been waiting. Now everyone is excited, and we are ready for the Olympics.”

Staying with you Savita, it must mean a lot to you, representing your country at an Olympic Games.
Savita: “Yes. Last time (at Rio 2016), we qualified for the first time in 36 years. That moment was a very proud one for us, and for me as well. Honestly, I was not very happy about my performance at the last Olympics, so I was really waiting for this Olympics! For me, my parents and everyone is proud that I am playing for my country.”

Same question to you Sreejesh. It is fulfilling a childhood dream, right?
PR Sreejesh: “For me, it is something beyond my dreams. I am from Kerala, and we do not have a rich history of hockey in my state. Coming from a state like that and playing three Olympics, it is beyond my dreams. When it comes to the Olympic Games, we have a rich history, when you talk about India. We have eight gold medals, as well as silver and bronze medals, so it is a great honour for me to wear that jersey, stepping on the field in the Olympic Games. Every time I am stepping on the field, it gives me an immense sense of responsibility, because I am determined to get those glory days back for my country. I just want to make sure that our people and fans are happy and proud about our performance. This jersey comes with more responsibility, and we have to adjust to that responsibility.”

In Tokyo, the focus will be all about getting out of those tough looking pools and into the quarter-finals. Sreejesh, your team face reigning Olympic champions Argentina, Australia, Spain, New Zealand and Japan in Pool A. What are your thoughts about the pool?
PR Sreejesh: “When you look at Pool B, I think we are in a comparably better position to qualify for the quarter-finals. In recent times at the Olympic Games, the quarter-finals are everything. In 2012, the top two teams [in each pool] qualified for the semi-finals, but now the teams get one more opportunity [to progress]. When you look at our pool, Australia is definitely one of the toughest opponents we have. Also Argentina, the previous champion, and Spain are really great nowadays. Japan are not a team to underestimate, playing on their home ground. New Zealand are looking really sharp nowadays. In their matches against Australia they showcased a really wonderful performance. It isn’t going to be easy for us to jump into the quarter-finals, but you can see that the quarter-finals are going to be really tough. There you can see Germany, Belgium, Holland and Great Britain, who are all waiting for us. It’s only a matter of five games where you need to find a good rhythm, to gain confidence ahead of meeting a big team in the quarter-finals.”

And Savita, the women’s are in Pool A alongside the World, European and FIH Hockey Pro League champions the Netherlands, Olympic champions Great Britain, Germany, Ireland and South Africa. It will be a challenge, but one I am sure India are really looking forward to taking on.
Savita: “Yes, we are looking forward to it. We know the Olympics are hard, and in both pools, every team is a strong team. We learned a lot of things from the last Olympics because we spent too long thinking about the rankings of the other teams. Of course, we know that Holland are a very good team, and the others, but now we are focussing on ourselves and our plan, what we have to do and going match by match. We will be giving it our best.”

Finally, both teams recently stated that any medal success in Tokyo would be dedicated to everyone who has been at the front line of fighting the covid-19 pandemic in India. It is a wonderful gesture – can you both tell us more about it, starting with you, Savita?
Savita: “Everyone knows what the scenario is now here in India. Things have been getting better, but the last two or three months have been not so good. We decided as a team that at the Olympics, we are playing for our covid warriors. We dedicate it to them.”

And you, Sreejesh?
Sreejesh: “This is the time of the pandemic, and everyone who sits in their rooms or at their houses, we are always feeling safe. But there are many who are working in the medical field, in the forces, the police, the social workers, even the delivery boys, they are all doing a wonderful job to keep us safe. That gesture came from all of us in the team. Now we are all working hard and sitting in comfort because of them, and they are the real heroes. They deserve some sort of recognition. Being an athlete or a player, I think this is one way that we can show our respect to them. So, any good performance at this Olympic Games goes to them, as they are the real warriors.”