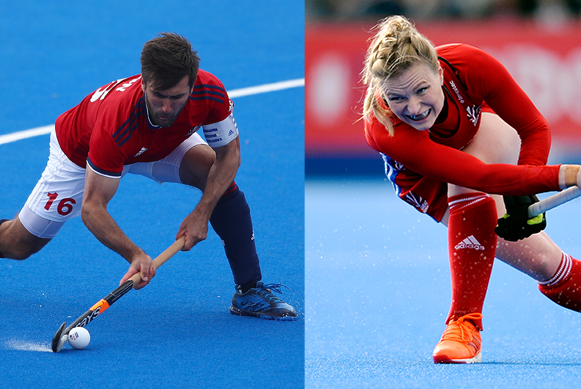 In the latest of our Olympic Spotlights series, we focus on another of Europe’s heavyweight nations, whose women’s and men’s teams will feel confident about their chances of success at the Olympic Games Tokyo 2020.

Having stunned the world by winning Olympic gold at Rio 2016, where they defeated the Netherlands in a thrilling shoot-out thanks to a sensational goalkeeping display from Maddie Hinch, Great Britain’s women will be determined to defend their title at Tokyo 2020. Following Olympic gold medal-winning head coach Danny Kerry’s switch to the England and Great Britain men’s programme in 2018, the responsibility for preparing GB for Tokyo is now in the hands of former Australian international striker Mark Hager, a man who worked wonders in New Zealand with the women’s Black Sticks team.  Hager successfully guided his team to a place at Tokyo 2020 by defeating Chile in the 2019 FIH Hockey Olympic Qualifiers, claiming 3-0 and 2-1 victories over Las Diablas at the Lee Valley Hockey & Tennis Centre in London.

It has been 30 years since Great Britain’s men famously claimed the gold medal at the Seoul 1988 Olympic Games. With the Olympic Games Tokyo 2020 on the horizon and Danny Kerry at the helm, could another success be just around the corner? GB have produced some fine performances in the FIH Hockey Pro League, and on their day are capable of competing against the very best in the world. GB overcame Malaysia in the 2019 FIH Hockey Olympic Qualifiers, beating the Speedy Tigers 4-1 and 5-2 at the Lee Valley Hockey & Tennis Centre.

We caught up with Great Britain captains Adam Dixon and Hollie Pearne-Webb – who famously scored the winning shoot-out effort against the Netherlands at Rio 2016 – to talk about how their respective teams are feeling ahead of the event. The interview took place in April 2021, before their squads were announced.

Hollie Pearne-Webb, Adam Dixon, thank you so much for talking to us! It may have been delayed by a year, but the Olympic Games Tokyo 2020 is just around the corner. Despite all of the challenges, you and your GB team-mates must be incredibly excited. What are your thoughts, Hollie?
Hollie Pearne-Webb: “I think everyone is really excited. An extra year, when everyone was ready for it last year, certainly builds the excitement. Also, for our squad, having undergone quite a lot of changes over the past two years since the last World Cup, in terms of the coach but also new youngsters coming in, the extra year has probably been quite a good thing for us to gel as a squad, with Mark [Hager] coming in in 2019. The extra year has been really good for us, giving us a bit more time together. Everyone is really looking forward to the months ahead.”

Same question to you, Adam.
Adam Dixon: “It is a huge relief, for the same reasons as the women’s squad. The excitement levels are really high at the moment. We are so close. Obviously, there is the tension that comes around selection, but if I was to flip it on its head slightly, 12 months ago we had players who were injured and out of the running for Olympic selection. The extra 12 months has given some of those guys a bit of wriggle room to find some fitness and form and make life difficult for [head coach] Danny [Kerry]. I think we are well prepared. We’ve had enough time, with these Games now on the horizon. We cannot wait to get going.”

It was a while back now, but can you tell us what it meant to you both when you secured qualification for Tokyo? Both of you booked tickets through the FIH Hockey Olympic qualifiers, with your team, Adam, overcoming Malaysia on home soil at the London’s Lee Valley Hockey & Tennis Centre.
Adam Dixon: “Honestly, on a personal level, a huge sense of relief. I was relatively new into captaincy. I did have some doubts and trepidations, which is natural going into big games like that. I didn’t want to be the captain to not lead the team to qualify for the Olympic Games. So on a personal level, it was ‘phew’! It was a pretty intense build-up to those games, that were played at the end of November [2019], but I was just really proud about how we went about the two games. If you look at all of the qualification series, across the men’s side of things, I actually think we put in the most convincing performances and the score-lines reflected that. I look at the Pakistan-Netherlands games [played in Amstelveen, NED], Pakistan ran them really close in game one. However, over two games I think we completely dominated Malaysia, and deservedly took the qualification spot.”

And Hollie, your team were also in action at Lee Valley, where your faced Chile, a team that you probably didn’t know too much about.
Hollie Pearne-Webb: “No, I don’t think any of us had played them before, so it was a potential banana skin, I guess. Similar to Adam, the months leading into those qualifying games were so focussed in terms of knowing what we had to do. I think both performances for us were quite similar as they were quite convincing. Everyone did their jobs and we knew exactly what we were going to do, so I think we were well prepared. It was a huge sense of relief to qualify, especially as there was quite a lot of media pressure, obviously being Olympic champions in Rio [2016], even though this is a completely different squad. I was really proud of all the girls and how we got through that. I think the period leading up to it was a really big lesson, and something we want to replicate going into the Olympics, to feel as prepared as we did there.”

As always at an Olympics, every match is difficult! The focus will be all about getting out of those tough looking pools and into the quarter-finals. Hollie, in Pool A your team face reigning world champions the Netherlands, India, world cup silver medallists Ireland, South Africa and Rio 2016 bronze medallists Germany, who you open your campaign against on 25 July. You’ll be looking to finish as high up the standings ahead of those quarter-final cross-overs.
Hollie Pearne-Webb: “Yes. When you get to an Olympics or a World Cup, both pools are incredibly tough. It doesn’t really matter which one you are in. Looking ahead, that first game against Germany will be a key game for us, really tough opposition. If we can get a good performance and get three points there, I think we will be absolutely fine. That is a really big focus for us, and then obviously hoping to get as good a cross-over as we possibly can going into the next round of games.”

Adam, GB men are in Pool B alongside reigning world champions Belgium as well as multiple gold medallists Germany and the Netherlands as well as Canada and South Africa, who you face in your opening match.
Adam Dixon: “When you look at the groups, they are both tough. You cannot really pick one over the other. I think maybe on balance, we’ve got possibly the harder group, just. Without getting ahead of ourselves, the opportunity there is that if we do get to play a cross-over game, we might get a slightly easier route to some medal matches. But that is me getting ahead of myself and dreaming big. That first game against South Africa is going to be huge. We’ve not played South Africa for some time, and I know that with their build-up and struggles to even get to the Games, they will be out for blood. It is going to be a really interesting game. With South Africa and Canada up first, we’ll be looking to get points on the board and to settle those nerves in the pool stage.”

Finally, what are your ambitions for Tokyo? Taking it one game at a time and see where the journey leads you, or is it having your eyes set firmly on the big prize, that Olympic gold medal?
Adam Dixon: “It goes without saying that we are there to win gold. I think we’d be foolish to downplay ourselves by setting any other goal. I think first and foremost, we have to target getting out of the pool to play those cross-over games. From there, just take each game as it comes. The pool stage is going to be very important for us. I honestly believe the playing field has been slightly flattened with the preparations, covid and everything else that has been going on. There are no certainties. The preparations of some nations will be slightly damaged by the travel restrictions, so I think the playing field is wide open. We are really looking forward to Tokyo.”

Hollie Pearne-Webb: “I think from our point of view as a squad, we definitely don’t see it as defending the title. We are a completely new group of players with a completely new coaching structure and a completely different way of playing. Our aim for our squad is to go and win a gold medal, and it would be the first time as our squad. That is what we are aiming to do and that is how we are looking at it. Of course, we are going there with the ambition to be at the top of the podium, but I think it is very much a case of focussing on one game at a time. Right now, our focus is Germany, and that is all we are thinking about. Once that one is done, it will be onto the next one. That is how the team in Rio did it. I think it was a huge benefit to us as a group, to not get too far ahead of ourselves. I think that is how we will go about it this time. Every game is going to be an absolute battle, and I agree with Adam, it is going to be the most unpredictable Olympics going, not just in our sport but every sport because of how covid has affected various teams. Those teams that are perhaps not on people’s radars will be a lot stronger. I know India women have been pretty much everywhere during covid playing games. They’ve probably played the most matches, so I think they are going to be really tough. Japan women as well, who have been preparing for these Olympics for some time. I think they will be a good force as well, another team that people wouldn’t have traditionally picked up. It’s going to be a very interesting Olympics, and it will be every team for themselves. On any given day, anyone can beat anyone, so it’s really exciting.”