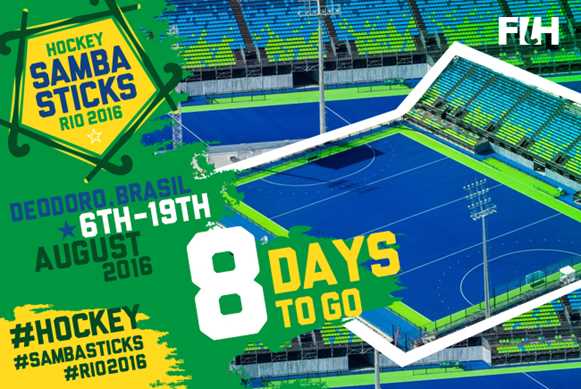 From the sky it will appear as two vibrant blue rectangles with a bright lime-green surround. On the ground, it will be a fizzing melting pot of excitement and action as 24 teams, 384 athletes and a daily influx of 8,000 fans participate in the pinnacle of international hockey events.

On 6 August at 10:00, Argentina men will take on the Netherlands in the opening hockey match of the Rio 2016 Olympic Games and one of the iconic sites of the event will spring into action. Later that same day, expect the stadium to turn yellow and green as Brazil men’s team plays its first ever Olympic match, against the 2008 Olympic silver medallists, Spain.

Then 13 days after the competition starts, on 18 August, at a little after 18.30, the men’s Olympic Champions will be crowned, followed by the women’s champions the following day.

The city’s planners hope the Deodoro Olympic Park will follow in the footsteps of London 2012 and offer a vibrant new area for sport, recreation and development. After the Olympics, Deodoro will offer the greatest legacy of Rio 2016," said a spokesperson for the site’s developers. "Differently than what we have seen so far in terms of post-Olympic legacies, Deodoro's legacy goes beyond the sporting sphere. It is focused mainly on generating recreational areas for the population.”

The Olympic Hockey Centre, which is part of the Deodoro Olympic Park was first used in the 2007 Pan American Games but has been completely renovated for Rio 2016.

The fields in Rio were constructed by some of the very best in the business, hockey specialists registered as part of the FIH Quality Programme for Hockey Turf. The building company responsible for the structure is Resinsa, the first FIH Quality Programme Approved Field Builder in South America. The pitches have been complete since April 2016, with local teams and international sides using the two fields of play in order to ensure they are running at their best by the opening matches.

Getting the field structure, surface and look right for this occasion has been a long process, involving input from a variety of sources – from technical experts to the players who will be centre stage.

Paul Kamphuis is General Manager of FIH Global Turf Supplier Polytan, the company that supplied the playing surfaces in Brazil, and he is delighted with the outcome of years of work. He said: “The Poligras Platinum Cool Plus hockey surfaces installed in Rio have been specifically developed with input from elite international players to enable them to play at their best.

Both fields will be in action on the first week of the Games, with all the play shifting to Pitch One as the competition enters the knock-out stages.

For hockey development in Brazil this is great news as the double pitches in Rio will enable the Brazil Hockey Confederation to host top level international events as well as provide a training and playing base for national and local teams.

Make sure that you use #Hockey, #SambaSticks and  #Rio2016 on social media when showing your support for your nation during the events, and follow FIH for all the latest updates as teams and fans get ready for the biggest show on earth – the Olympic Games. For more information about hockey in Rio, visit Rio2016.com.