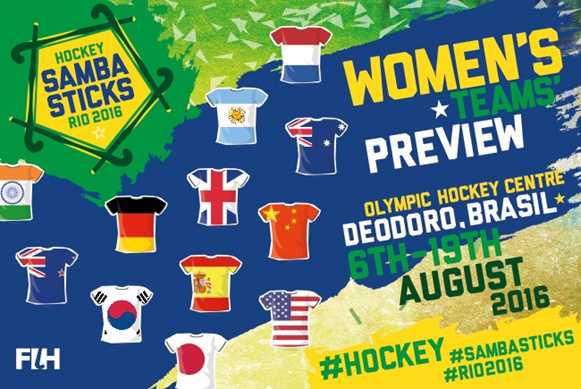 Women's Olympic Preview: Who is going for gold in Rio?

In only nine days time, the greatest show on earth begins, with the planet’s finest hockey teams preparing to battle it out for the biggest prize in sport – an Olympic gold medal.

Today we focus on the women’s competition, where the Netherlands are aiming to make history by becoming the first women’s hockey team to claim three successive Olympic titles.

With six teams fighting it out for four quarter-final positions in each pool, every single match has meaning and one slip-up could prove costly. Here is a look at the competing teams.

Netherlands - FIH Hero World Ranking: 1
The Netherlands, coached by Australian hockey legend Alyson Annan, are the Olympic gold medallists from both the Beijing 2008 and London 2012 Games, and two years ago once again proved themselves as the finest team on the planet by winning the Rabobank Hockey World Cup in front of their home fans in The Hague. The squad named for Rio contains four FIH Players of the Year – Naomi van As (2009), Maartje Paumen (2011 and 2012), Ellen Hoog (2014) and Lidewij Welten (2015), while brilliant shot-stopper Joyce Sombroek, the FIH Hockey Stars Goalkeeper of the Year for both 2014 and 2015, is an ever-reliable presence. They remain the world’s top ranked side and will surely be the team to beat.

New Zealand - FIH Hero World Ranking: 4
Under the guidance of Head Coach and former Australian international Mark Hager, New Zealand’s Black Sticks have enjoyed arguably the most successful period in their history. The New Zealand squad named for the 2016 Olympic Games contains masses of world level experience. The team just missed out on the medals at London 2012 with a fourth place finish, but their talented squad is certainly capable of a podium finish in Rio. Five players in the group have represented the Black Sticks over 200 times, with Gemma Flynn (238), Charlotte Harrison (214), Stacey Michelsen (208), Kayla Whitelock (formerly Sharland, 247) and Anita McLaren (formerly Punt, 239) all having achieved the milestone. McLaren and Flynn provide speed and goals, while team captain Whitelock has made a sparkling return to international hockey in 2016 following the birth of her daughter last year.

China - FIH Hero World Ranking: 6
China have been in something of a transitional phase in recent years, but the current group is really starting to make some serious headway in their bid to restore the team to the performance levels achieved in 2008, when they claimed the silver medal at the Beijing Olympic Games. Ace goalkeeper Li Dongxiao, lively midfielder De Jiaojiao and forward Zhao Yudiao – the 2010 FIH Young Player of the Year - are key players in a China team that is growing in confidence with every tournament that they enter. 24-year-old defender Wang Mengyu is one of China’s most experienced campaigners and has a reputation as a feared goal-scorer from penalty corner situations.

Germany - FIH Hero World Ranking: 9
2013 European champions Germany – known as Die Danas – are always serious title contenders in every event in which they compete, something that will be no different in Rio. Head Coach Jamilon Mülders has been nurturing this gifted group for a number of years, and has named a squad containing a fine balance of talented youngsters alongside some experienced heads. Goal-scoring sensation Lisa Altenburg has been included, as has inspirational defender Julia Müller, who is back to full fitness after a year-long absence through injury. The 2004 Olympic gold medallists took the bronze medal at the Unibet EuroHockey Championship 2015 in London last summer, and have set their sights on a podium finish in Rio.

Korea - FIH Hero World Ranking: 8
Double Olympic silver medallists Korea are known for being one of the most well-organised international sides in world hockey, and on their day are capable of giving any team a run for their money. Feared striker Park Mi Hyun and ace attacker Kim Jong Eun are usually the first names down on the team-sheet and are massively influential figures both on and off the field, as is key midfielder Han Hye Lyoung. Goalkeeper Jang Sooji is another player to keep an eye on, having earned a reputation as a terrific shot-stopper who is something of an expert when it comes to shoot-outs.

Spain - FIH Hero World Ranking: 14
There can be no doubt that under the guidance of Head Coach Adrian Lock, 1992 Olympic gold medallists Spain have been undergoing something of a revival. The Englishman – a former U-21 international - is getting the best out of a youthful but extremely talented group of players, many of which could be central figures not just at the Rio 2016 Olympic Games but also in Tokyo  in 2020. Key players include battling midfielder Georgina Oliva, team captain Rocío Ybarra and 24-year-old Berta Bonastre, the younger sister of Silvia Bonastre, who represented Spain at the Athens 2004 Olympic Games. With 235 caps to her name, Ybarra is the most capped athlete in the group and is likely to be a key player in Rio.

Argentina - FIH Hero World Ranking: 2
Alongside the Netherlands, Argentina have been the dominant force in women’s hockey for well over a decade. Las Leonas (The Lionesses) have won six of the last seven Hockey Champions Trophy competitions and also claimed the bronze medal at the Rabobank Hockey World Cup in 2014 and silver at the London 2012 Olympic Games. Despite the retirement of iconic attacking midfielder and eight times FIH Player of the Year Luciana Aymar in 2014, there is no question that Argentina remain a true powerhouse of world hockey, a fact proven by their title successes at the Hockey World League (2015) and the recent Hockey Champions Trophy in London. Livewire attacker Carla Rebecchi and drag-flicking defender Noel Barrionuevo are both potential match winners amongst the current group, while 2014 FIH Young Player of the Year Florencia Habif and exceptional forward Maria Granatto are rated as two of the most exciting talents in the game.

Australia - FIH Hero World Ranking: 3
Between 1994 and 2000, Australia were unquestionably the best team on the planet, claiming two Olympic gold medals and two World Cups as the team coached by Ric Charlesworth (and inspired by the on-field brilliance of current Netherlands women’s Head Coach Alyson Annan) ruled the hockey world. Many years have passed since that time, but under the expert guidance of Head Coach and former Australia men’s international Adam Commens, the side are once again challenging for the game’s top honours. The team will be led by inspirational captain and all-time record cap holder Madonna Blyth, while defender, penalty corner expert and Hockey Australia’s women’s Player of the Year for 2015 Jodie Kenny is a prolific goal-scorer for the Hockeyroos.

Great Britain - FIH Hero World Ranking: 7
Following their bronze medal at the London 2012 Olympic Games, Great Britain will be aiming even higher at Rio 2016 and certainly have players capable of mixing it with the very best in the world. The vast majority of the GB squad for Rio represented England at last year’s Unibet EuroHockey Championships in London, where they took the title thanks to the goalkeeping heroics of Maddie Hinch, whose brilliance in the shoot-out helped her team overcome world number one ranked Netherlands. A fifth place finish at the Hockey Champions Trophy on home soil earlier this year was below expectations, but the team coached by Danny Kerry are expected to be back to their very best at this summer’s Olympics.

USA - FIH Hero World Ranking: 5
Over the past two years, Team USA have earned a reputation as a team that needs to be feared and respected in equal measure. The team – coached by former England and Great Britain international defender Craig Parnham - claimed a remarkable fourth place finish at the 2014 Rabobank Hockey World Cup, despite entering the event placed 10th in the FIH Hero World Rankings. In 2015, they successfully defended their Pan American Games gold medal by defeating Argentina in the final, and in 2016 the side snatched the bronze medal at the Hockey Champions Trophy in London. The USA team is captained by 31-year-old defender Lauren Crandall, who with over 270 international appearances, is one of the longest serving members of the group.

Japan - FIH Hero World Ranking: 10
Over the past decade the Japanese women’s team has been making in-roads on the international hockey scene and will be looking to upset the FIH Hero World Rankings in Rio. One of their most notable performances in recent years came in 2013 when the Cherry Blossoms defeated higher-ranked Korea in the final of the Asia Cup. The Japanese team is renowned for being exceptionally quick and masters of counter-attacking hockey, which will be useful assets as they try to negotiate their way out of the pool and secure a place in the competition Quarter-Finals. Team captain Miyuki Nakagawa is Japan’s most influential and experienced player, having represented her country over 280 times.

India - FIH Hero World Ranking: 13
This will be the first time in 36 years that India’s women’s team will be participating at the Olympic Games. The team achieved a fourth place finish at the Moscow 1980 Olympics, the one and only Olympic competition that the Eves have played in to date. India certainly have more than enough quality in their ranks to trouble the top teams. In fact, their opponents will need to figure out exactly how to stop free-scoring attacking duo Vandana Katariya and 21-year-old strike partner Rani Rani, two of the most prolific goal-scorers in the game.

Make sure that you use #Hockey, #SambaSticks and  #Rio2016 on social media when showing your support for your nation, and follow FIH for all the latest updates as teams and fans get ready for the biggest show on earth – the Olympic Games.