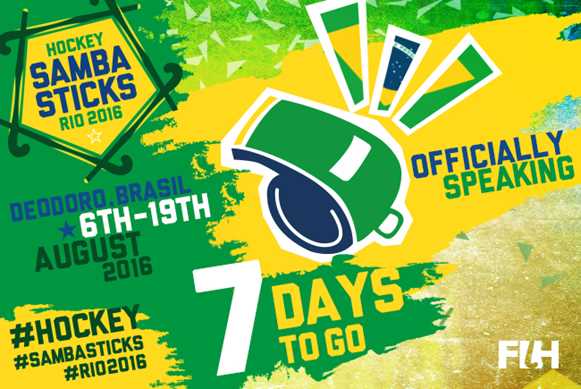 The excitement has been building for months now. One by one the pieces fall into place as nations qualify, teams are announced, the schedule is released and the world waits for the whistle to blow. And it's not just the players who have been on tenterhooks waiting to see if they have made the cut.

For the 32 umpires and 4 video umpires who will be officiating the men’s and women’s hockey events at the 2016 Rio Olympics, waiting for the appointment email to ping into their in-boxes last September was a tortuous time.

“I found out at 3am in the morning and had to wait until everyone was awake to share the news,” said Australian umpire Kylie Seymour.

“I was away from Moscow with no wifi, so I didn’t find out until I had a message saying a letter had arrived.” Elena Eskina, Russia’s top hockey umpire laughs as she recalls, “My friends were going crazy because they knew the appointments were out but they didn’t know if I had been selected.”

It's not just the athletes who have spent the past four years training for selection to go to the Rio Olympics. For umpires too, taking their place on the biggest sporting stage is a dream come true, but it is a dream that is only realised after a heap of hard work and preparation.

"The demands upon umpires are increasing all the time," Kylie says. "The players at the moment are the fittest I have ever seen. We have to make sure we are consistently at a level – mentally and physically – that allows us to move with the game as it intensifies.”

Lim Hong Zhen, who is making history as the first Singaporean umpire to officiate at the Olympics since John Martens at the Munich Games in 1972, expands upon Kylie’s point: “Mental and physical fitness preparation is key to our game today. At an event of this magnitude, where the whole hockey world is watching, there is very little margin for error. We must all turn up mentally prepared and physically fit to be at our very best from the first whistle."

To help prepare, the umpiring team has been using the FIH Dartfish private collections of videos for umpires and video umpires. They have also made use of the Coach Logic video platform, where individual umpires’ Sportscode and Dartfish logging from their matches at previous tournaments has been uploaded. This allows the umpires to review their performances, evaluate and identify areas for improvement when they return home from events.

Lim Hong Zhen explains that, as part of the review, the umpires look at decision-making, their management, positioning on the field, body language and concentration levels during different stages of the match.

“It terms of fitness, we break it down into two aspects: 'physical fitness' and 'match fitness’,” he says. “Gym work gets us physically fit for the job, while umpiring in as many local leagues and tournaments ahead of the Olympics gives us that all-important match fitness, so that we can arrive in Rio completely ready and not to have a ‘cold’ start to the tournament.”

It is a tough ask. These umpires are in full-time jobs and the training is done in their own time. And yet, their approach is as professional as any player’s.

Like Elena, New Zealand’s Kelly Hudson is at her second Olympics. She said: “I think the main thing that I have done since London, aside from now clocking up more experience and time at the top level matches, is continue to develop the understanding of the players, what they are trying to do, and where the game is heading. To consistently apply the rules when the game is becoming faster, more dynamic, skilful and spectacular, is a tough thing to do! But I like to manage the game by communicating with the players and getting them to understand where I am coming from with a touch of empathy.”

Looking back to her appointment to London2012, Elena says that the significance of the Games took some time to sink in: "My first reaction was simply that this was a really big, really prestigious hockey tournament. I didn't realise the difference between being at a big hockey tournament and being at the Olympics. It took a while to sink in, to realise just how special that was. So my feelings before the Olympics compared to my feelings after the Olympics were totally different.”

Elena says it was only when she returned from London that she realised she had been part of something very special. "It became obvious to me that it doesn't matter what role you are in, the important thing is that you are there. Whether you are a sportsperson, volunteer, official – it is really, really special and you only fully understand that when you have been part of it."

Kylie listens on intently as Elena speaks: "Well that has sent goosebumps down my spine," she says. "If I wasn't a bit nervous before, I am now.”

If Kylie is busy controlling her nerves, Lim Hong Zhen is positively fizzing with anticipation: “Having watched the 2014 FIFA World Cup from home, where you could feel the passion of the people of Brazil even through a TV set thousands of miles away, I am sure this Olympic Games will be amazing. The atmosphere will be electric and the Brazilians are known for their "Samba style”, so I am very sure this will be shown during the upcoming games in August. I can't wait to soak in the atmosphere!”

Make sure that you use #Hockey, #SambaSticks and  #Rio2016 on social media when showing your support for your nation during the events, and follow FIH for all the latest updates as teams and fans get ready for the biggest show on earth – the Olympic Games. For more information about hockey in Rio, visit Rio2016.com.