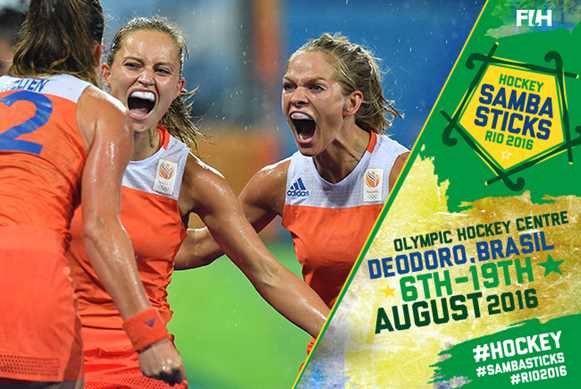 New Zealand, Germany, Great Britain and reigning champions the Netherlands were all winners on women’s Quarter-Final day at the Rio 2016 Olympic Games, revealing the line-up for the competition Semi-Finals.

New Zealand continued their excellent form at the Deodoro Hockey Centre by defeating Oceania rivals Australia, and will now face a Semi-Final match against Great Britain, who proved too strong for Spain in their Quarter-Final. The Semi-Final meeting between the Black Sticks and Team GB will be a replay of the London 2012 bronze medal match, where the host nation emerged victorious.

Germany defeated USA to claim their ticket to the final four, where title holders the Netherlands now lie in wait. The Dutch kept alive their dream of securing a third successive Olympic gold medal by overcoming London 2012 silver medallists Argentina, continuing an unbeaten run that began with their opening match at the Beijing 2008 Olympic Games. Interestingly, Germany were the last team to beat the Netherlands in Olympic competition, with Die Danas claiming a monumental 2-1 success over Oranje in the final of the Athens 2004 Olympic Games to win the gold medal.

The Semi-Finals will take place on Wednesday 17th August, with the Netherlands versus Germany match getting underway at 12:00 Brasilia Time (GMT / UTC -3) before Great Britain and New Zealand do battle at 17:00.

The first match on women’s Quarter-Final day was the Oceania derby, with Pool A second place finishers New Zealand (FIH Hero World Ranking: 4) claiming a 4-2 victory over Oceania champions Australia (WR: 3), who finished third in the Pool B standings. It is the second Olympic Games in succession that the Black Sticks have reached the Semi-Final stage, having done the same at London 2012 before finishing the event without a medal in fourth place. Penalty corner goals in the opening two quarters put New Zealand on their way, with Anita McLaren’s drag-flick finding the top right corner before Kelsey Smith made it 2-0 with a diving deflection six minutes ahead of half time. The Hockeyroos reduced the deficit when Kathryn Slattery netted a penalty corner just after the break, but two New Zealand goals in four minutes from Gemma Flynn and Olivia Merry took the score to 4-1 before Slattery completed the scoring with a late consolation. It was a joyous moment for the Black Sticks, who are now single-minded in their determination to leave Rio with medals around their necks.

Pool A’s third place finisher Germany (WR: 9) became the second team to book a final four ticket, upsetting the FIH Hero World Rankings with a 2-1 triumph over Pan-American champions USA (WR: 5), who finished second in Pool B. An electric first period saw Die Danas move into a 2-0 lead, with Marie Mävers and Lisa Altenburg on target as the Olympic champions from Athens 2004 made the perfect start and gave the Americans a mountain to climb. Katelyn Falgowski’s field goal three minutes from the end of the match gave USA reason to believe, but the German defence showed immense composure in the final stages to claim a win that keeps their gold medal ambitions very much alive.

Pool B winners Great Britain (WR: 7) have been in exceptional form throughout Rio 2016 and made it six wins out of six with a superb first half performance to outclass Spain’s Red Sticks (WR: 14), who finished fourth in Pool A, with a 3-1 victory. Danny Kerry’s team were sensational in the first two quarters, with attacker Sophie Bray in particular proving almost unplayable as she inspired Team GB into a 3-0 half time lead thanks to goals from Georgie Twigg, Helen Richardson-Walsh and Lily Owsley. Spain, the 1992 Olympic champions, were vastly improved after half time and had some notable chances, with Berta Bonastre hitting the post before Georgina Oliva scored a fine individual goal seven minutes from the end. Although it proved to be only a consolation, Spain Head Coach Adrian Lock will be proud of the way his team performed at Rio 2016 and knows that his young charges will have learned a lot as they plan ahead to the Tokyo 2020 Olympic Games. For GB, the win means that they are still in the hunt for a second successive Olympic medal following their bronze at London 2012, and the gold is certainly not beyond them.

The final match of the day was an epic battle between the top two sides in world hockey, with reigning Olympic and World champions the Netherlands (WR: 1) fighting their way past perennial rivals Argentina (WR: 2). Despite finishing fourth in Pool B, Las Leonas produced easily their best performance of the competition but it was not quite good enough to deny the Beijing 2008 and London 2012 Olympic gold medallists their place in the final four. Although heavy rain made the playing conditions far from perfect, the re-match of the London 2012 Olympic final was utterly absorbing throughout. 2015 FIH Hockey Stars Player of the Year Lidewij Welten gave the Dutch an early lead with a well taken backhand effort before Laurien Leurink doubled the advantage just before half time when she finished off a fine solo run with a blistering forehand strike. Florencia Habif pulled a goal back for Argentina just before the end of the third quarter, but Kelly Jonker re-established the Dutch two goal advantage with 13 minutes remaining. Delfina Merino set up a grandstand finish with a penalty corner seven minutes from time, but the Netherlands held on to move within two victories of winning a third successive Olympic title.  It was an emotional end to the competition for Argentina, whose wait for that elusive first Olympic gold medal goes on.

The Olympic hockey action continues on Tuesday 16th August with the men's Semi-Finals taking centre stage. At 12:00 Brasilia Time (GMT / UTC -3), Pan-American champions Argentina (WR: 7) face reigning Olympic champions Germany (WR: 3) before European neighbours Belgium (WR: 6) and the Netherlands (WR: 2) take to the field at 17:00. The two winning teams will meet in the gold medal match on Thursday (18 August), with the losing sides playing off for bronze on the same day.