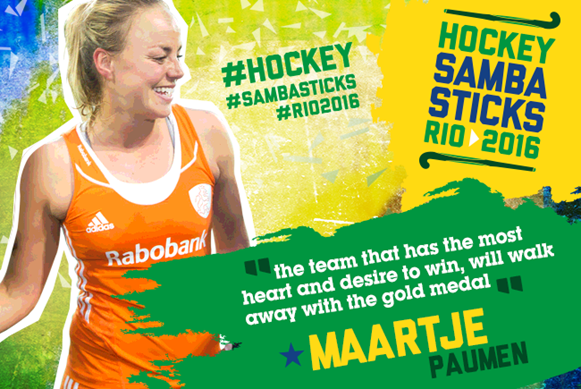 With two Olympic gold medals already under her belt, fans can be forgiven for thinking Netherland's Maartje Paumen may approach Rio 2016 with a level of complacency but, as the former double FIH Player of the Year, revealed during the Hockey Champions Trophy, nothing could be further from the truth.

"Every Olympics is different. When I went to Beijing for my first Olympics, I was a 21-year-old and I was very nervous and did not know what to expect. At London 2012 I was captain, which brings its own challenges and motivations. Rio will be different again, but I know that we will go there wanting to play at our best in every game.

"When you think that we train twice a day, every day for four years, then you realise just how special the Olympics is."

The Netherlands captain says that the recent Champions Trophy provided a great opportunity for the squad to do some fine tuning. Since Alyson Annan came on board as coach in 2015, this has been the focus of the team – relentless work on the basics, honing the tactics, fine tuning penalty corner routines and increasing use of video analysis.

"The Champions Trophy was very important as it put us against the best nations in the world, so it was good to see where we stand at the moment," says Paumen. Her next sentences perhaps explains the Netherland's domination of the sport for the past 12 years. "We aim to play every game better than the one before. There have been many changes over the past few years, the increasing use of technology, for example, is one area, but at the end, the team that has the most heart and desire to win, will walk away with the gold medal."

With selection taking place a week after the team returned from London there was a certain amount of tension around the Netherlands squad. The 24 players would be reduced to 18, but Paumen emphasised that this was a positive. "Players were nervous about selection but that did not affect the way we played. Knowing that we are competing for places means we always bring our best game to each match, but we also know that as a team we are helping each other be the best we can be for Rio. Of course there is conflict because players are competing for places, but this is a positive thing."

In the next few weeks, Netherlands will spend two weeks training in Holland before playing Belgium and Spain. Then they jet off to Rio for the defence of their title and a chance to win an unprecedented third consecutive gold medal.