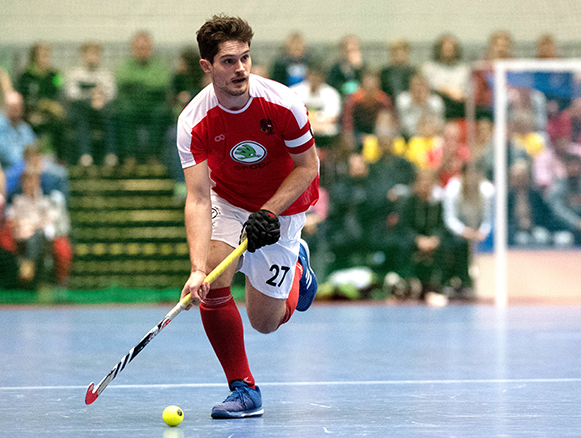 Why Indoor hockey is a mind game

Xaver Hasun will be competing at his third FIH Indoor Hockey World Cup when he takes to the pitch with Austria in Liège in February. The reigning champions stole the thunder in Berlin in 2018 when they beat Germany in front of a huge home crowd, but Hasun thinks the challenge will be even tougher this time around.

‘Beating Germany, in Berlin, at Indoor hockey is probably the biggest thing you can achieve in a World Cup,’ says Hasun.

‘I don’t know how many people were in the stadium but they were mostly against us, although there were a few Austrian supporters. If you re-watch the game, we were lucky to get into the shoot-out but then we went on to win it.’

Austria has a great indoor hockey tradition in recent years. Since Hasun joined the squad Austria won silver in 2015 and gold in 2018. He says much of the success comes down to a strong team bond that has been built over a number of years.

‘The biggest thing is that we have known each other for six or seven years. We are a proper unit and we are friends with each other. The bonding and the atmosphere in the team, that is the biggest thing.

‘Indoor hockey is super tough. It is 40, 50 or 60 minutes of fast play, and it is very challenging so you have to stay together. It is a really strategic game and there is always a challenge.’

Hasun says the toughest thing about the indoor game is the tactical challenge it poses to teams and coaches. ‘Everyone is constantly thinking how to win and everyone thinks they have the right solution for the next game. But every game is different. At this level everyone is good on the ball but you have to be super good off the ball as well.’

With just a few weeks before the FIH Indoor Hockey World Cup Liège 2022 begins, the team has been ramping up its preparations. Before Christmas, the players who compete for clubs in Austria were getting together twice a week, while the players competing in Germany were doing the same.

Since Christmas, the squad has been together on a regular basis. Ahead of the World Cup, Austria will be competing at the EuroHockey Indoor Championships in Hamburg, which will give the team a chance to look at some of the opposition they will face in Liège.

Talking about rivals to the title, Hasun says: ’The pressure is on Germany this year. There are some other nations who are also good, and yes, Austria is among those. We want to be on our game and our best is good. But there are a few teams who are also very good. Belgium, Netherlands and Russia as well as Germany. Belgium will be extra motivated because it is in Belgium. There will be a big hype for Belgium, which can be an advantage but it can also be a disadvantage.”

The interview was recorded on 17th December 2021.