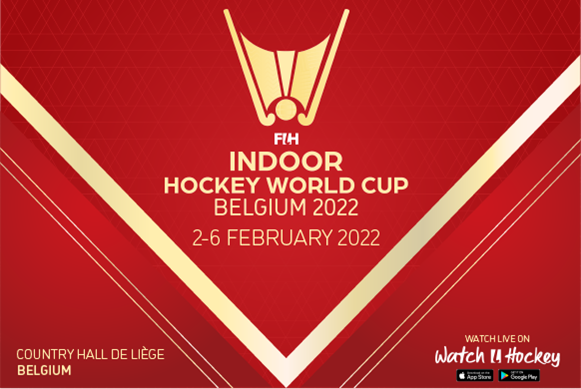 As we build up to the sixth edition of the FIH Hockey Indoor World Cup, which is set to take place in Belgium early next year, we throw some light on the teams that will compete for the title at the intense, action-packed competition that will be played at Country Hall de Liège from 2-6 February 2022.

The latest of our profile series focusses on Namibia’s men, who were invited to participate as a reserve nation following the covid-19 enforced withdrawal of Australia and New Zealand. Team captain and goalkeeper DJ Strauss, who competed at 2011 Indoor World Cup in Poznan, Poland, gives us the low-down on all the build-up to the showpiece event in Liege.

DJ Strauss, thank you so much for joining us! The FIH Indoor Hockey World Cup in Liege, Belgium is only a couple of months away. How are the team feeling about taking on the world’s best indoor teams?
DJ Strauss: “When we got the call up, it was wonderful. We couldn’t believe it! On our WhatsApp groups and sport training groups, they were asking ‘are you guys joking? Is this serious?’ When it hit us finally, we were so excited, ecstatic in fact. It is just an awesome opportunity for us. We cannot wait to go. We are training hard. We are on the underdog side of the story, and we would really like to go and perform.”

Exciting for you personally, no doubt, given the fact that you played at the 2011 Indoor World Cup in Poznan, Poland (where Namibia finished 12th). It must be fantastic to return to this great stage.
DJ Strauss: “Yes, definitely. The last time I was only 19 years old. I’m still playing after all these years for Namibia men and now I find myself, at the age of 30, the oldest in the side! We have quite a young side. But for me personally, it will be great to go back and have a better experience than I did at the World Cup 11 years ago.”

What are your memories of that event in Poznan? It was a very special competition.
DJ Strauss: “It was. But for us, small Namibia, going to the World Cup for the first time, we really did not know what to expect. We thought we knew what we were getting into, but after our first game against Germany (losing 18-0), it hit us like a ton of bricks. A lot of bad experiences, but also a lot of good experiences. I always tell people that, hockey-wise, it was a very bad experience. But learning-wise, it was the best experience we could have had. Personally, it was the biggest learning experience I’ve had in my hockey career.”

So how are the team’s preparations for Liege coming along?
DJ Strauss: “It is going very well. We are on the court eight hours a week, the gym four or five hours per week, fitness sessions three hours a week. We are hitting it! We get Friday afternoons off. We just want to get past the shock of the body, just to get used to what we will be experiencing on that side of things. So, to get ready for our test series against South Africa, which is from 16-19 December.”

Teenager Fagan Hansen finished top scorer at the Indoor Africa Cup with 24 goals in five games, including two 11 goal hauls against Botswana. He seems lively! Perhaps a player for the fans in Liege to keep an eye on?
DJ Strauss: “He is one of our younger players and yes, he is something else. Off the field he looks like the laziest person you will ever meet in your life, but as soon as he gets onto the field, his personality completely changes. He runs hard, passes whenever he can but doesn’t like passing when he hits the circle. That confidence is going to be a real ‘up’ for us, an advantage to us in an attacking sense.”

Your team will play in pool B against Germany, Iran, Netherlands, hosts Belgium and United States. What are your thoughts about the pool?
DJ Strauss: “We had a bit of a shock when we saw the schedule, especially the first day when we play Iran and Germany, number three and two in the world. But I said to the younger guys, ‘who wants to go to a World Cup and not play the best?’ You want to test yourself against the best to know where you are and test your limits.”

Finally, can you give us an idea about the Namibia’s ambitions for the competition?
DJ Strauss: “First of all, I’d like us to say what a huge honour it is to be able to go. My biggest sympathies to Australia and New Zealand, who lost this opportunity not because of the players fault, which is very unfortunate for them. For us, it opened a massive door. I just want to say to those players that I know that their chance has been taken away, but for us it means the world. It is unbelievable. All our thoughts are with them. In terms of our expectations, we want to go and make a quarter-final. We can really do it, if we are on the right track and [if everything goes well] on the day. A huge bonus would be if we can end top six, then we can get two African countries at the World Cup.”

Thank you once again for talking to us and the very best of luck in Liege!
DJ Strauss: “Thanks for the pleasure of talking – we’ll see you on the other side!”