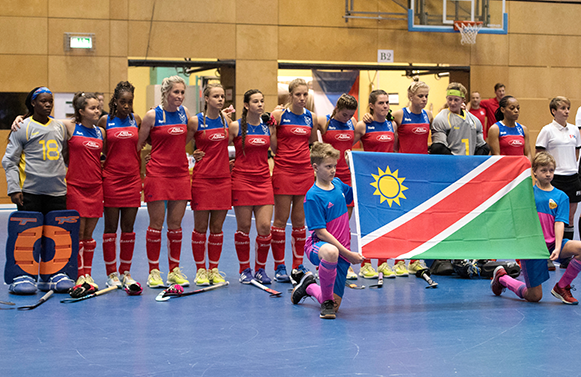 With the FIH Indoor Hockey World Cup just three months away, attention is shifting to this fast, exciting version of the game.

The showcase event, taking place in Liege, Belgium, will provide a platform for the best indoor hockey teams in the world to shine, but the sport is vitally important at grass roots level too.

In countries where facilities such as full size, artificial pitches are not readily available, then an indoor space is often the only option and many national associations use indoor hockey to promote the game to a wider audience.

Philip Fernandes is President of the Guyana Hockey Board and he explained why indoor hockey has become so popular in the South American country.

Much of the reason centres around facilities. ‘There are no artificial pitches in Guyana, for hockey or any other sport. The grass pitches, which serve as playing areas for outdoor hockey, are cricket grounds and, with cricket the number one sport in the country, hockey has to fit around the cricket schedule.’

The problem is exacerbated by the heavy rainy season. The resulting flooded pitches limits the months during which cricket can be played, meaning there is even less time for hockey. Most hockey teams are centred around the capital city of Georgetown, and this built up area suffers worse flooding than most areas of the country.

The conditions and lack of facilities have driven the players indoors. Fernandes says there are only so many indoor facilities, but these are utilised whenever possible. ‘Our players rely heavily on playing indoor hockey to keep active in the game. Quite often, even our national outdoor teams have to train indoors due to the unavailability of our fields.’

As a measure of how much indoor hockey has become ingrained in the Guyanan hockey culture, the national women’s team’s only international commitment in 2021 – due to Covid restrictions - was participation in the Indoor Pan American Cup. They were the only Guyana hockey team to participate internationally in 2021.

Since the inception of a national indoor league in 2017, the Guyana Hockey Board has been promoting the indoor game within the national school curriculum.

Most schools have an indoor space where hockey can be played, be it a sports hall or a general-use auditorium, so, as Fernandez says, it is proving a successful way to introduce youngsters to the sport.

‘Our hockey playing family consists of people from all economic levels and ethnicities,’ says Fernandez. ‘The sport has a good reputation and teachers see the benefit of a team sport like hockey, which encourages children to stay active, and also to interact with their peers. In this modern world, there are so many distractions including electronic gadgets that can consume the time and attention of children without interaction or physical exercise. And parents also see hockey as a welcome addition to their child’s life.’

The benefit of the indoor game for raising hockey’s profile in a country is perhaps best illustrated by Namibia. The women’s national indoor team will be making its third appearance in four editions of the Indoor Hockey World Cup, while the men will be making a first appearance since 2011, following the withdrawal of Australia and New Zealand due to Covid-related travel restrictions in those two countries.

While the outdoor teams may be ranked 39th (women) and 59th (men) in the FIH World Rankings, when it comes to the indoor game, the African nation punches high above its weight. The women’s team is ranked ninth in the world and the men are ranked 16th, above many recognised powerhouses of the sport.

The success of the indoor teams in recent years has provided a pathway for the outdoor game. The recent installation of the country’s first artificial pitches in Windhoek demonstrates the interest that hockey in all its forms is gaining in Namibia.

The sense within the Namibia Hockey Union is that the sport has graduated from being solely focused on participation at grass roots level, to being a sport where the teams can compete on the international stage.

And the importance of indoor hockey to that transition was highlighted by the words of chief administrator of the Namibia Sports Commission (NSC), Freddy Mwiya in an interview with The namibian newspaper: ‘You are going to compete against big giants but believe me, Namibia, as young and small as we are, we don't mind about what type of giants we compete with. You went to the [FIH} Indoor World Cup in 2018 and won two, drew two and lost two matches, and now the team you are taking now is a much stronger team than before, I know for sure that we will be among the top nations,” he said.

Mwiya added that hockey should no longer be seen as a developmental sport in Namibia but rather  as a priority sport code in the country, alongside sports such as cricket.

And emphasising the role sport can play in a country's national coherence, President of the Namibia Hockey Union Reagon Craig said: ‘We are celebrating a first, because it's the first time in the history of Namibia that a national men's team and a national women's team will participate in an international World Cup.

‘I urge all Namibians to support our national hockey teams. We all know how sport can bring our nation together.'