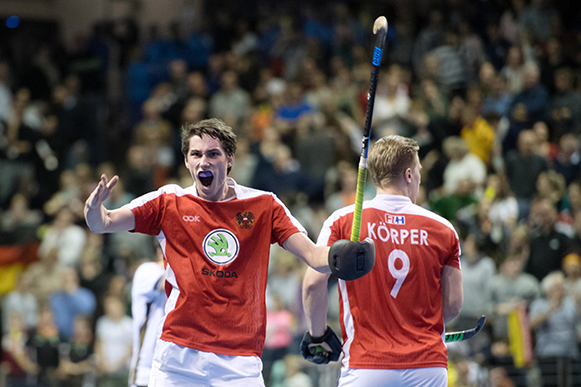 History beckons for teams in Liege

The Indoor Hockey World Cup started in Leipzig in 2003 and is now approaching its sixth edition, to take place in Liege, Belgium in February 2022.

The game is fast, furious and full of drama and excitement. The fact it is held in an indoor arena adds to the atmosphere. Noise levels resonate, the smaller pitch makes the game appear even faster, the spectators are close to the action and can palpably feel the tension among the athletes.

In the men’s competition, 23 different national teams have participated in the previous five World Cups, with Germany enjoying the greatest success – three gold medals, plus a bronze and a silver. The reigning champions, however, are Austria, who defeated Germany in a thrilling final in Berlin in 2018. On that occasion a packed Max-Schmeling-Halle bore witness to the brilliance of Austria’s Michael Korper, who scored twice in the final to help Austria come from a 2-1 deficit to take the match to a shoot-out, which Austria won.

A first bronze medal for the men’s national indoor team of Iran was another standout moment from the 2018 edition of the World Cup. The style and commitment of the Iranian team saw them record some surprise results in the pool rounds, as they held Austria to a draw and beat an obdurate Russian team. In the bronze medal match, they swept away the challenge of Australia in a 5-0 rout.

Aside from Germany and Austria, the other gold medalists in the men’s competition was the Netherlands, who won gold in 2015. On that occasion, it was Austria who were beaten after the Dutch raced to a 3-1 lead in the first half of the match. Iran lost to Germany by a colossal 13-2 margin, emphasising their progress in the subsequent years.

Australia, Czech Republic, Germany and Russia are the only men’s teams to have participated in every edition, while Argentina will be making their Indoor World Cup debut in Belgium this time around. 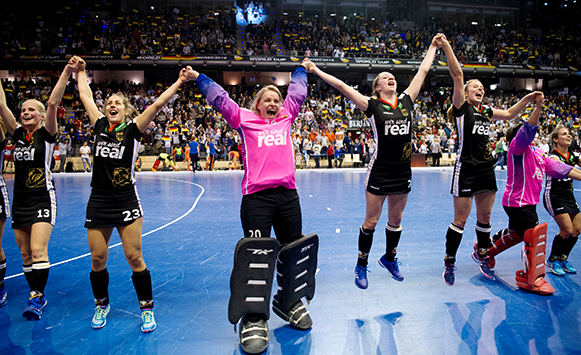 In the women’s competition it is a familiar story of a history of European domination of the event. Germany and Netherlands have split the honours with Germany winning in 2003 (Leipzig), 2011 (Poznan) and 2018 (Berlin) and the Netherlands taking gold in 2007 (Vienna) and 2015 (Leipzig).

Aside from 2007, when Germany were pushed into third place and Spain took silver, these two giants of the game have dominated the top two spots.

The global reach of the women’s game is even greater than the men’s with 26 different nations participating in one or more World Cup events.

While European teams tend to dominate the Indoor Hockey scene, there are always teams that light the stage with their personality and flair. Trinidad and Tobago, Namibia, Kazakhstan, Scotland and Uruguay have all gained huge followings among the supporters at each event as they have brought their own style to the party.

Indoor hockey only has periodical and brief moment on the centre stage but while it is there, it certainly is a sport that grabs the limelight and leaves people feeling elated and exhausted through the sheer skill and speed of the action.