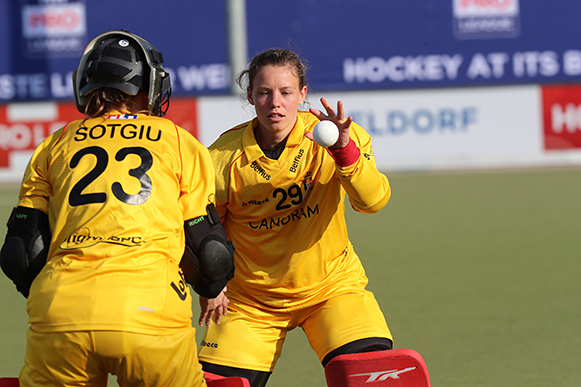 Elodie Picard is goalkeeper for both the Belgium women’s national outdoor and indoor squad. She and her team mates are looking forward to being the host nation at the forthcoming FIH Indoor Hockey World Cup in Liege in Belgium in February 2022.

‘We are very excited, especially as we are organising the tournament,’ said the goalkeeper. ‘We hosted a tournament three years ago and it is always amazing to play in front of a home crowd.

For Elodie, this is her second Indoor Hockey World Cup, she first participated in 2015 in Leipzig, Germany. It was an experience that has really stuck with her.

’At the World Cup in Germany in 2015, it was amazing. Germany is a country that really loves its indoor hockey so to be there and feel the atmosphere was incredible. I hope we have the same thing in Belgium. Because it is in Liege, it is not so far from Holland and Germany so there will be people there from all over Europe and from all over the world, depending of course on what is happening with Covid.’

‘I remember that we were not expecting to be in Germany in 2015 but we finished in the top two of the B division so that is how we qualified. Then our opening match was against Germany in front of a full stadium.’

Elodie adds with a wry smile: ‘We ‘only’ lost 4-1, which sounds a lot but in indoor that is a respectable scoreline and it made us realise that we could compete against the best team of the world.’

Between now and the Indoor Hockey World Cup, the Belgium players will be working hard to ensure they are ready for the challenge. The squad trains together twice a week. They will take a short break between Christmas and the New Year before they are back playing tournaments in Vienna, then Spain and then onto the World Cup itself.’

Like most teams, Belgium have experienced Covid-related issues. The head coach tested positive and so had to miss some training sessions, but Elodie explains that the team structure, organisation and sheer resilience means that they were able to continue training and were not fazed by the situation.

‘We had the adaptability and motivation to keep training, so it wasn’t a problem. We are just doing the normal stuff, wearing masks. It is all just normal now.’

For Belgium, the indoor and outdoor squad are largely different athletes, but Elodie is one of the few players who plays national level for both versions of the game. ’The indoor game is very fast, so the ability to read and understand the game is important. It really helps with decision-making. When I move from indoor to outdoor, I do feel my game is different because I make decisions much quicker.

‘Then the balance and the technical aspects of the outdoor game is important to the indoor game.’

With hockey in Belgium flying high at the moment, Elodie says that finishing in the top eight will be a good result, although she does not rule out the chance of a medal.

‘In indoor it will be difficult to win a medal but of course, we will play every game to win and we will see how we rate against the other teams. I think we are a good team and we can definitely get a good result.’