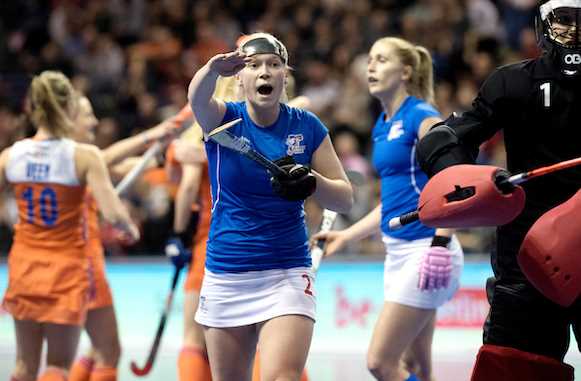 As we build up to the sixth edition of the FIH Hockey Indoor World Cup, which is set to take place in Belgium early next year, we look at the teams that will compete for the title at the intense, action-packed competition that will be played at Country Hall de Liège from 2-6 February 2022.

In the latest of our team profile series we speak to Katrina Lacina of the Czech Republic, who provides an update on how her team’s preparations are going for the showpiece event in Liege. Lacina, a member of the bronze medal winning team that competed at the 2015 Indoor World Cup in Leipzig, Germany, discusses her memories of previous campaigns as well as also the ambitions for the upcoming competition.

The interview was recorded in mid-November.

Katerina Lacina of the Czech Republic, thank you so much for joining us! The FIH Indoor Hockey World Cup in Liege, Belgium is only a couple of months away. How are you and the team feeling about taking on the world’s best indoor teams?
Katerina Lacina: “I’m so excited. It’s coming in a couple of months, so our preparation has already started. I believe last week that the Czech team started to train together, but unfortunately, I’m still in Belgium finishing the outdoor season, so I’ll join them a little bit later. But I’m already very excited about the team being together, and to see my team-mates and the chance to do the preparation properly.”

A third Indoor World Cup for you, having won bronze at Leipzig 2015 and finished 7th at Berlin 2018. You must have some amazing memories from those competitions, 2015 in particular.
Katerina Lacina: “2015 was amazing. I was very young, so I remember really enjoying my first big competition with the national team. That is why it was just brilliant; I couldn’t wish for a better start with the national team. We want to go for a similar ending to the tournament this time. I think we are going to have a strong team, I believe, so I’m very excited.”

You qualified for Liege thanks to a 3rd place finish at last year’s EuroHockey Indoor Championship in Minsk, Belarus, beating reigning indoor world champions Germany in a shoot-out in the bronze medal game. That must have been an incredible moment for your team.
Katerina Lacina: “It was a huge moment, yes. It was a tight game and yes, Germany are an amazing team, especially in indoor. Outdoor as well, but indoor they are amazing. It was a really tough game. I remember the game very well. In the end, we were a bit luckier and won in the shoot-out. Everyone was very nervous, but we did it, so good for us!”

Your team will play in pool A against Germany, Ukraine, Kazakhstan, United States and Canada. You need a top four finish to reach the quarter finals, although you will be aiming to finish top of the pool, I’m sure!
Katerina Lacina: “Absolutely. In the group we will aim for fourth position at least, but the goal for the tournament is definitely a medal, which I think is doable. We should think high. It’s hard to say what to expect from the teams outside of Europe because we don’t compete against them that often, and we know that Ukraine and Germany are really strong, so it is not going to be easy. But we will do our best to play a really good tournament there and I hope we can do it.”

As someone who has done it, what is it like to play at an Indoor World Cup? It must be an amazing experience.
Katerina Lacina: “It’s absolutely amazing. In general, I love indoor, maybe I even like it more than outdoor hockey. But playing in front of such a crowd, it’s just amazing. You see your friends and family and people loving hockey, who have come to watch and are cheering. They stay the whole day in the hall because there are so many games being played during the day. It’s an amazing atmosphere, not only for the fans but also for the players. We enjoy every single game, so I’m very excited about the tournament again.”

Thank you once again for talking to us and the very best of luck in Liege!
Katerina Lacina: “Thank you for having me!”