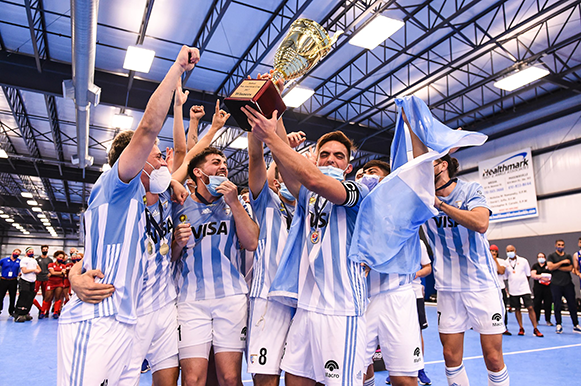 Argentina men and USA women will be competing at the FIH Indoor Hockey World Cup in the Belgium city of Liege in February 2022.

The two teams were triumphant at the Pan Am Indoor World Cup qualifier, which was held at Spring City, Pennsylvania, USA from June 25-27th.

In the women’s competition, USA defeated Canada with a solid 3-0 victory in the final. The goals came courtesy of Ashley Sessa and Rose Hope in the fourth and sixth minute of the game and the match was sealed beyond doubt when Hope scored again to make it 3-0.

The USA had looked like potential champions throughout the course of the competition. Their opening match had seen them fire home 20 goals against tournament debutantes Guyana. They had then beaten Canada in a feisty and competitive 4-5 match before beating Uruguay in a close 2-1 encounter.

USA’s toughest match in the round robin came against Argentina, where the two teams were inseparable and the match ended 3-3. 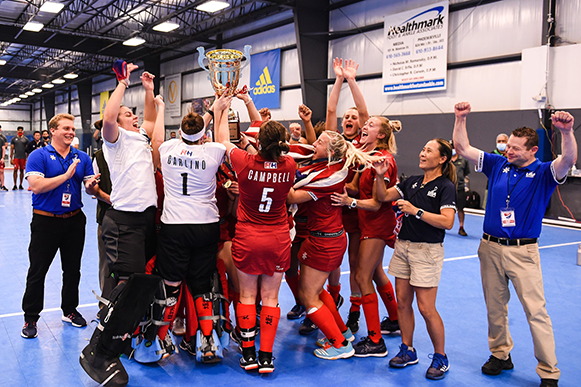 Rose Hope, who was USA’s two-goal hero in the final was also the tournament’s top goal scorer with 13 goals, ahead of team mate Ashley Sessa, who scored seven.

Argentina took the bronze medal after they defeated the battling team from Uruguay in a close match that ended 5-4 to the Argentina team.

The men’s competition saw a tough battle for the number one spot between three teams all determined to make their dreams of a World Cup appearance come true.

Eventually however, the two teams who made it to the all important final were decided and Argentina lined up against USA.

The match was tense and cagey, with no goals conceded in the first quarter. A goal from Agustin Ceballos gave Argentina the lead in the second quarter but that was the only goal in the first half.

Aki Kaeppeler evened things up from a penalty corner in the 22nd minute before Argentina re-took the lead through Gonzalez. It was in the fourth quarter that things heated up. Ceballos scored his second to give his side a 3-1 lead before Jaja Kentwell made it 3-2. The final minutes of the match were frenetic as the USA went in search of an equaliser. In the dying seconds of the game however, Ceballos scored his third and put the title firmly in Argentina’s hands.

USA women and Argentina men will now have eight months to prepare themselves for the challenge of the FIH Indoor Hockey World Cup. This will be the second consecutive world cup contested by USA, with Argentina making their debut.