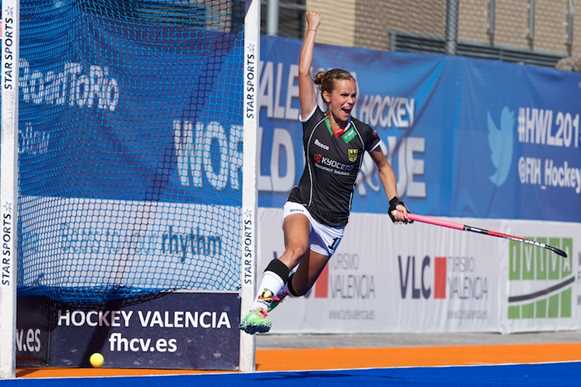 Germany pulled off another incredible escape act to secure their Olympic ticket ahead of Argentina, winning in a shoot-out after yet another late goal – this time from Anissa Korth – snatched a 1-1 draw in normal time.

Goalkeeper Kristina Reynolds then produced a string of great stops in the shoot-out giving Germany the platform to produce a 3-1 success. Reynolds kept out three Argentine efforts before Jana Teschke netted the winner.

Earlier on, Argentina's Carla Rebecchi was in ominous form for much of the opening half, buzzing in the forward line and leading the press to nick plenty of ball in dangerous territory. She and Agustina Habif drew brilliant stops from Reynolds in the first five minutes and, after constant Argentine pressure, Rebecchi got her side on the board in the 16th minute.

It was a lovely move, taking the ball with her back to goal, spinning on to her open side and crashing home. Her side rode out a yellow card suspension for Martina Cavallero in decent fashion, winning a couple of corners, one of which Noel Barrionuevo fired inches wide.

Strong corner running from Eileen Hoffmann kept out another couple of set pieces in the second half before Germany launched their latest counter-strike. Lea Stockel almost surprised Belen Succi with a near post effort while Charlotte Stapenhorst deflected over the bar before Anissa Korth was credited with a dramatic equaliser.

She worked her way to the right baseline before attempting to cross. It popped up dangerously and, while taking evasive action, Noel Barrionuevo was unfortunate to deflect the ball into her own net. It meant a carbon copy of Germany’s quarter-final win over Spain and they held their nerve once more in the shoot-out to finish third overall and confirm their place at Rio 2016.

Hero of the hour, goalkeeper Kristina Reynolds said: “It was just amazing team spirit. We wanted that ticket and everyone fought until the end.

“I don’t enjoy the shoot-outs at all. My legs go weak and everything but I know I have to stop the ball for my team. They are very good in the shoot-out and make me feel safe. Going to Rio was the most important thing and we did it! It’s just a great feeling.”

German coach Jamilon Mülders said: “Obviously Kristina [Reynolds] was incredible. But I have to pay tribute to everybody. It’s something to do with belief. Argentina caused us a lot of problems in the first and second quarters but we came up with better solutions in the second half and created some chances – not as good as theirs but still chances.

“It’s a myth, German style. Twice we have done it here but it’s not just here. In the Europeans twice and in the last World League, winning several matches in a shoot-out. Always, we have had great goalies."

Santi Capurro, Argentina's coach said: "We played better than them most of the game. I am incredibly proud of my team. Hey, its sport, these things happen. Of course we will go to the Pan-Ams wanting to win, but not because of this. Argentina always wants to win."

“Mentality; it’s in the training! I can tell you how I train it when I retire! It’s about believing and trust and the point of view you have in the match.”