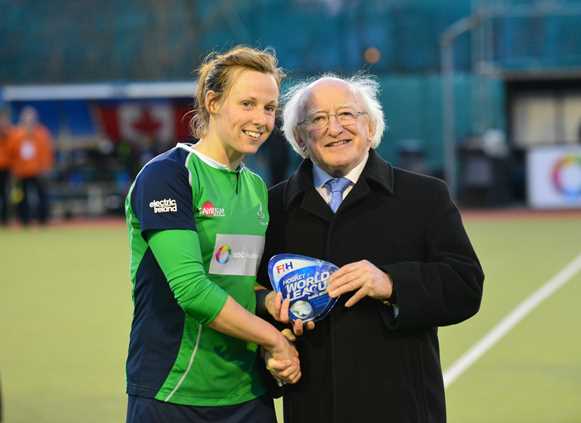 It came at the end of a pulsating final that finished with the scores locked at 1-1, with Ireland’s Nikki Evans and Holly Stewart of Canada netting close range goals from penalty corners in the third quarter.

The sides were inseparable thereafter, leading to the shoot-out in which Connery was the heroine, scoring the vital goal in the final round to give the Green Army a 4-3 win. Ireland shot-stopper Ayeisha McFerran, still just 19 years old, played a huge role in the success, saving Canada’s fifth penalty with a superb display of agility.

Played out in front of a capacity crowd that included Irish President Michael D Higgins, it provided a fitting finale for a week in which Ireland also progressed their Olympic hopes.

Speaking afterwards, Ireland coach Darren Smith said it was a superb way to finish what had been a wonderful week for his team.

“A fantastic crowd, the President of Ireland, friends and family all here and a chance to win a tournament. The girls were really excited for the final and it was good spectacle. Canada did a good job but we got the result in the end. World League 2, from my perspective, was a great advertisement for hockey and a lot of fun.”

Although Ireland emerged victorious, Canada can look back on a their tournament performances with great pride. The side finished above higher-ranked Belarus (WR: 18) and Chile (WR: 20) in the final standings, and by reaching the final they join Ireland in qualifying for the Hockey World League Semi-Finals (Round 3).

The Bronze medal went the way of Chile, who defeated Belarus 3-2 to deny their European opponents the chance of competing in the Olympic qualifier phase of the Hockey World League. The Belarusians came into the game knowing that a win would be enough to see them qualify for Round 3 as the highest ranked third place finisher, something that Chile could not achieve due to their lower ranking than Azerbaijan (WR: 19), who finished third at the event in Montevideo earlier this year. However, the Chileans ensured that they ended their brilliant tournament on a high, with competition top scorer Daniela Caram getting what proved to be the decisive goal just after half time.

Earlier in the day, Austria beat Lithuania 2-1 to take fifth place with Ukraine recording the same score in their victory over Turkey to claim seventh.

In the women’s Hockey World League, a total of seven qualification places for the HWL Semi-Finals were available from the Round 2 events that took place in Montevideo (URU), New Delhi (IND) and Dublin (IRL).  The reason for seven rather nine qualifiers is because both Spain and Belgium, two nations ranked between 12-19 at the time of seeking entries, are hosting Semi-Final tournaments later this year and have therefore already qualified.

The top two finishers from Montevideo, New Delhi and Dublin were all certain to qualify for the Semi-Finals, being joined by the highest ranked of the third placed finishers from those three events.  Italy and Uruguay confirmed their places in the Semi-Finals with a top two finish at the event in Montevideo, being joined in Round 3 by New Delhi finalists India and Poland and Dublin finalists Ireland and Canada. Azerbaijan (WR: 19) are the seventh and final team to qualify from Round 2 to Round 3 due to being higher ranked than fellow third place finishers Chile (WR: 20 – 3rd in Dublin) and Malaysia (WR: 21 – 3rd in New Delhi).

To learn more about how the teams progress through the competition in the hope of reaching the Rio 2016 Olympic Games, click here.

You can catch up on all of the action from the tournament in Dublin by visiting the official tournament microsite.

Young Player of the Tournament: Hannah Haughn (CAN)

Goalkeeper of the Tournament: Kaitlyn Williams (CAN)