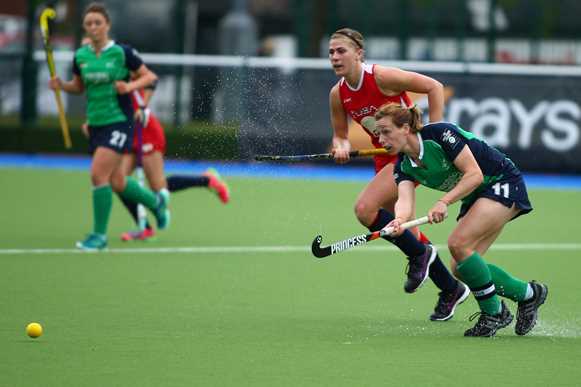 Can anyone stop home favourites Ireland?

The third and final Round 2 event of the women’s Hockey World League begins in Dublin this weekend, with eight nations set to fight it out for the chance to compete in the Olympic qualification phase of the competition.

The UDG Healthcare PLC Hockey World League Round 2 event, which takes place between Saturday 14th and Sunday 22nd of March, will see Belarus, Chile, Canada, Ukraine, Austria, Lithuania, Turkey and host nation Ireland all targeting a top two finish in order to guarantee a place in the HWL Semi-Finals, where places at the 2016 Olympic Games in Rio de Janeiro are on offer.

Host nation Ireland (FIH World Ranking: 14) are the top ranked team in the tournament and are strong favourites to emerge top of Pool A, where they face Canada (WR: 22), Ukraine (WR: 25) and Turkey (WR: 36). Ireland have named an enormously experienced squad with goalkeeper Emma Gray, Cliodhna Sargent, Emma Smyth, Shirley McCay and Chloe Watkins all having surpassed 100 international appearances marker. Canada – comprehensive winners of the HWL Round 1 event in Guadalajara (MEX) last September – are expected to be Ireland’s biggest rivals in the Pool, while both Ukraine, who finished second at 2014’s Round 1 tournament in Siauliai (LTU), and Turkey are definitely not teams to be taken lightly.

Arguably Ireland’s biggest threat to glory on home soil comes from Belarus (WR: 18), who compete alongside Chile (WR: 20), Austria (WR: 27) and Lithuania (WR: 34) in Pool B. The Belarusians were in great form in Siauliai last year, storming to a first place finish ahead of Pool A rivals Ukraine and Pool B opponents Lithuania. Chile and Austria, who finished second at the HWL Round 1 event in Hradec Kralove (CZE), are also both more than capable of making a big impression in Dublin.

The top two finishers from Montevideo, New Delhi and Dublin are certain to qualify for the Semi-Finals, being joined by the highest ranked of the third placed finishers from those three events.  Italy and Uruguay recently confirmed their places in the Semi-Finals with a top two finish at the event in Montevideo, while Azerbaijan face a nervous wait until the end of the Round 2 events before knowing if they are the highest ranked of the third placed finishers. To learn more about how the teams progress through the competition in the hope of reaching the Rio 2016 Olympic Games, click here.
You can keep track of the tournament in Dublin on the official tournament microsite.