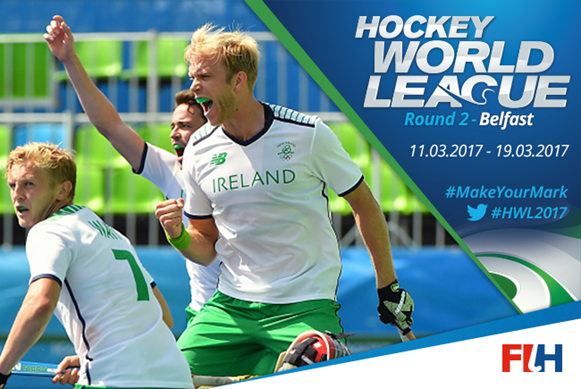 With the Hockey World League Round 2 in Dhaka, Bangladesh currently in full flow, the second men’s Round 2 event of the year gets underway on Saturday in Belfast, Northern Ireland.

The eight-team competition, which takes place between Saturday 11 and Sunday 19 March, will see Austria, Italy, hosts Ireland, France, Poland, Scotland, Ukraine and Wales battling for a top two finish to guarantee a place in the Hockey World League Semi-Finals, where those coveted berths at the Hockey Men's World Cup 2018 in India are up for grabs.

Like all of the Round 2 events, the competition in Belfast will witness a clash between teams that came through the first phase of the competition against sides that were automatically given a bye through to Round 2 due to their higher placement in the FIH Hero World Rankings. The highest ranked teams will enter the World League at the Semi-Final stage of the Hockey World League which will take place in this summer.

The competition will feature two pools of four, with the finishing positions at the end of the pool phase determining the line-up for the quarter-finals, which begin on Thursday 16 March.

Ireland's Green Machine secured qualification for the Rio 2016 Olympic Games thanks to their superb performances in the 2014-15 edition of the Hockey World League and they will be aiming to repeat the trick in their search for a World Cup ticket. Goalkeeper David Harte – winner of the last two FIH Hockey Stars Goalkeeper of the Year Awards – is the superstar of the team, while defender Ronan Gormley has 250 international appearances to his name. Drag-flick specialist Shane O’Donoghue is fast gaining a reputation as a world class talent and is certainly worth keeping an eye on.

Austria are likely to be Ireland’s strongest challengers, and in Michael Körper they have one of the finest strikers in the game. Körper is a threat from open play and penalty corners, which could create a fascinating match-up with Ireland’s David Harte when the two sides meet on Sunday (12 March).

Ukraine and Italy, the top two finishers from the Hockey World League Round 1 event in Prague, Czech Republic, complete the line-up and will certainly be keen on making a big impression in Belfast.

Italy’s Agustin Nunez netted ten times in Round 1 to finish top of the scoring charts at that event, followed closely by Ukraine’s Vitalii Kalinchuk who scored nine. Both players will be looking to have a similar impression on the outcome of this Round 2 competition.

France (WR: 17) are top ranked side in Pool B, although they are closely followed by Poland who sit just two places behind them at 19th. Brothers Tom and Hugo Genestet are the two most experienced – and influential – players in the team captained by Victor Charlet. 30-year-old Bartosz Zywiczka will lead a Poland team that is building for the future, featuring four teenagers including 17-year-old Mikolaj Gumny. Pawel Bratkowski, often a front-runner in the race for competition top scorer thanks to his expertise from penalty corner situations, has also been named amongst the Poland ranks for this event.

British rivals Scotland (WR: 27) and Wales (WR: 34) will also be fighting hard for the points in Pool B having both come through the Round 1 event that took place on Scottish soil in Glasgow.

Despite their lower ranking, it was the Welsh who emerged triumphant at that event, defeating the competition hosting Scots 3-2 thanks in part to an early double strike from Gareth Furlong.

Scotland’s Alan Forsyth finished as top scorer in Glasgow with eight goals including seven from open play, marking him as a striker to be feared in Belfast.