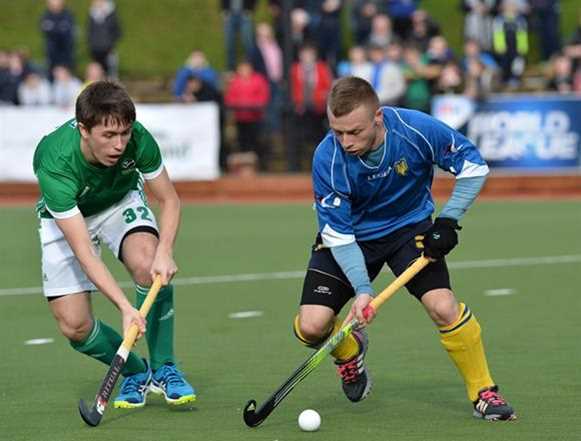 Ireland cruised to a 9-2 win over Ukraine in their opening Hockey World League Round 2 tie in Stormont with Jonny McKee netting twice while seven other players got on the score sheet.

Ukraine did reply almost instantly from an Andrii Koshelenko drag-flick from a fortuitous penalty corner. Ireland, though, were quickly back in front as McKee burst forward unchallenged and cracked his shot into the top corner, 2-1 at the quarter time break.

Ben Walker had been called up the day before the tournament as a late replacement for John Jermyn and won Ireland’s first corner which Shane O’Donoghue nailed for the third.

Walker’s touch from a Paul Gleghorne ball then fell invitingly for Lee Cole to thrash in the fourth. McKee closed out the half at 5-1 with another cracking finish, roofing a powerful shot beyond the hapless Egor Samoilenko.

Matthew Nelson was the next on the scoresheet, a back-to-front break-out from a Ukraine corner, David Harte’s save going out to Matthew Bell at right back and on to Eugene Magee. His cross was turned in by the teenager, one of two players from Ireland Under-18 side of last summer on display.

Conor Harte and Matthew Bell fired in two more corners in the fourth quarter before Walker nudged in the ninth goal. Ukraine got another back in the final minute via a Sergii Diachuk penalty stroke.

Craig Fulton: “We’ll take the result”, said Ireland Head Coach Craig Fulton. “We didn’t play our best but we got enough goals in the first half to get away from them. It wasn’t all plain sailing and we were frustrated we gave away a few unforced errors. It’s a young team, first game, still gelling together – maybe that’s ok and to get nine goals, we did something right.”

Benjamin Stanzl scored a bonus point shoot-out for Austria to give them two points while Italy took one point after their Pool A encounter ended 1-1.

Both the goals came from corners in quick succession. Thomas Keenan whipped home a drag-flick in the 18thminute to break the deadlock only for Austria’s Michael Korper to equalise four minutes later when his drag made its way into the goal.

From there, the Austrians probably created more of the chances while Italy sat deep with Keenan bossing the defence from sweeper. Two corner chances went a begging for the Austrians in the second half while Italy had one blocked down inside the last two minutes to leave the game level at full-time.

For the World League Round 2, draws go to a shoot-out to decide a bonus point. In this one, Austrian keeper Mateusz Szymczyk saved three times, including the crucial one in the sixth round, allowing Stanzl to spin and score for 4-3 and an extra point that leaves them second overnight ahead of a game with Ireland.

An even first quarter was played at a frantic pace with Kiefer and Tom Genestet dictating the French attack through the centre. Viktor Lockwood created the first chance of the game with a driving ball into the circle, a tactic the French employed throughout, but the Scottish defence calmly cleared any danger. Rogeau was next to challenge the Scottish defence as he sprinted into the circle but his pass back to the penalty spot was swept up by the Scottish defence. The play broke up the pitch in the blink of an eye and Greaves found himself in front of Thieffry in the French goal but he fired the ball directly at his pads. A complicated PC routine by France yielded no reward and moments later Scotland had a shot cleared off the line. Thomas Alexander was then forced to make a superb reaction save with his left glove and the French ramped up the pressure. An inevitable goal came in the 26th minute courtesy of Simon Martin Brisac as he calmly flicked the ball over the committed Alexander.

France went up another gear as the second half began and saw Tynevez’s deflection fly just wide. Victor Charlet doubled his sides lead with a simple PC drag flick in the 41st minute. Their third goal came just 4 minutes later thanks to a superb run through the centre by Hugo Genestet and Kieffer for a slight touch to help the ball creep under the GK. Scotland got a deserved consolation goal in the 50th minute courtesy of a Forsyth simple PC shot into the corner. The clock wound down with a few more chances for both sides but France ran out deserved winners.

Wales proved too strong for Poland in their opening Pool B game in Stormont, starting with a 3-1 win. They had much the better of the first half, spurning two big one on one chances before Gareth Fulong nailed a penalty stroke in the 25th minute – it was awarded when Robert Gruszczynsiki was adjudged to have blocked a shot on goal with his body.

Luke Hawker doubled the advantage in the second half following a fast start to the second half and the Welsh were well in control until the closing quarter. There, Poland pressed forward and got one back from Gruszczynsiki’s powerful drag-flick. But Rupert Shipperley instantly replied, finishing off a three-on-one move he was instrumental in creating.