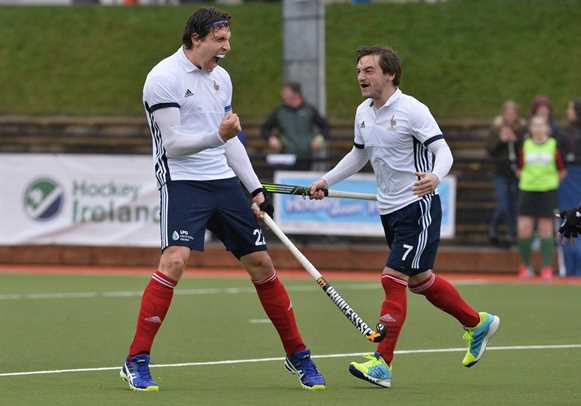 Action from France's semi-final victory over Scotland at the Men's Hockey World League Round 2 event in Belfast. Credit: PressEye.

Both nations safely qualify for Hockey World League Semi-Finals, where World Cup tickets will be on offer

The final of the men’s Hockey World League Round 2 event in Belfast will be contested between Ireland and France after both sides emerged victorious on semi-final day.

Ireland (FIH Hero World Ranking: 10) produced a composed performance to come from a goal down to beat Wales 3-1, guaranteeing they will advance not just to Sunday’s final but also to the Hockey World League Semi-Finals where the World Cup 2018 tickets will be decided.

France (WR: 17) booked their ticket to the competition showpiece and the Hockey World League Semi-Finals with a 2-0 win over Scotland, who will now meet Wales in the classification match for third place on Sunday (19 March).

Ireland’s Green Machine produced a fine performance from the second quarter on, bouncing back after a low-key first 15 minutes in which Wales had the upper hand. They were rewarded with the first corner – courtesy of Owain Dolan-Gray’s right wing run – which Gareth Furlong duly netted his fifth goal of the tournament.

That awoke Ireland and, with Sean Murray driving things, showed much more spark in the immediate aftermath. Jamie Wright was felled out by the left sideline in unceremonious fashion to give Ireland their first penalty corner and Shane O’Donoghue nailed his drag-flick for 1-1 in the 18th minute.

Seven minutes later, Ben Walker made it 2-1. O’Donoghue powered into the circle from a turnover and pushed a shot beyond goalkeeper David Kettle but with not enough gas to reach the goal. The teenager picked it up and slightly miscued his shot but it had enough on it to loop into the goal.

Neal Glassey then got the clinching goal with 13 minutes to go, capping a fine performance with a knee-high deflection from McKee’s quickly taken free.

Speaking afterwards, Ireland coach Craig Fulton said was delighted with the performance and the ticket to the next stage of the World Cup qualification process.

“Target achieved for sure but we do have one more game to go and we want to win the final,” he said. “We played well today; it was a tough game and all credit to Wales. They were an attacking side and strong defensively. We had to be patient.

France ensured their progression to the next phase of the Hockey World League as first half goals from Pieter van Straaten and Victor Charlet proved enough against Scotland in a 2-0 result.

Van Straaten opened the scoring with a top effort from open play, firing home after some good work in midfield with 10 seconds remaining in the first quarter. Victor Charlet slammed in a corner in the 22nd minute for 2-0 as France had a huge volume of control in the first half.

Scotland, though, bounced back in the second half, throwing everything forward and penning France deep in their own territory. They had a series of penalty corners but were unable to make the breakthrough.

Michael Bremner hit the post with the pick of Scotland’s chances while France also hit the post twice at the other end. With no further goals, the French prevailed and will play Ireland in the final in Belfast.

The Austrians eased to a 6-1 win over Ukraine with Michael Körper firing home a hat trick. Ukraine did hit the front when Andrii Koshelenko netted an 18th minute penalty corner. However, two Körper efforts swapped the lead within eight minutes before Patrick Schmidt made it 3-1 at half-time. Dominic Uher’s corner and a field goal from Alexander Bele extended the margin to 5-1 before Körper completed the win.

Poland’s tie with Italy was far tighter. Patryk Pawlak and Juan Montone exchanged early goals to leave the tie locked at 1-1 for the guts of half an hour before Mateusz Hulboj grabbed the winner in the second half. Poland had chances to make the game safer but held on, nonetheless, for their first win of the competition, 2-1.

Sunday 19 March will see the final day of action in Belfast, with all eight competing teams in action. The 7-8 classification match takes place at 10:00 GMT and will be contested between Ukraine and Italy, with Austria facing Poland in the 5-6 play-off at 12:15. Wales and Scotland go head to head in the 3-4 classification match at 14:30, with the showpiece final between Ireland and France getting underway at 16:45.

Like all the Round 2 events, the competition in Belfast will witness a clash between teams that came through the first phase of the competition against sides that were automatically given a bye through to Round 2 due to their higher placement in the FIH Hero World Rankings. The highest ranked teams will enter the World League at the Semi-Final stage of the Hockey World League which will take place in this summer.