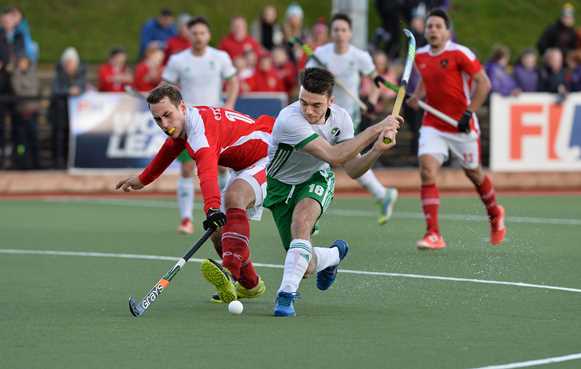 Ireland earned a winning draw ahead of Austria to ensure they will top Pool A at the end of Day 2 of the Hockey World League Round 2 after normal time had ended 1-1 against Austria.

Austria proved a much sterner test than Saturday’s encounter against Ukraine, employing a compact, man-to-man defence that left Ireland with plenty of ball but often not in the most dangerous areas.

Nonetheless, Matthew Nelson’s third minute goal had Ireland in for nearly 90% of the game before they succumbed to a penalty corner goal from Dominic Uher inside the last two minutes.

Nelson’s goal was a powerful effort, grabbing the ball and shooting home from Chris Cargo’s cross from the right wing. After that, there were tidy incisions from Jonny McKee and Nelson along with one corner which was charged down.

The second quarter, though, saw the tempo slow dramatically with chances at a premium. Austria won one corner which Bernhard Schmidt saw guided away by the post-defender. Matthew Bell’s cross-field overhead to Shane O’Donoghue was the pick of Ireland’s attacks but his reverse went off target.

Precious little goal-mouth incident came in the third quarter, leaving the narrow gap between the sides to continue deep into the game. Jonny Bell’s excellent overlap almost yielded a second goal but his cross was stood on by McKee at close quarters.

It left Ireland susceptible to one last attack, especially when Lee Cole was sin-binned and a ball down the line was mis-trapped, allowing Schmidt to break in and win a corner. He dragged and Uher was credited with a touch to send the ball in down the middle of the goal.

It meant a draw which, in this competition, leads to a shoot-out for an extra bonus point. Ireland scored four from four with Conor Harte, Eugene Magee, Jonny McKee and Shane O’Donoghue all scoring.

2016 FIH Goalkeeper of the Year David Harte saved twice for a 4-2 success on that front and guarantee Ireland lead the group overnight.

Reflecting on the tie, Craig Fulton said he was reasonably happy despite a largely low-key tie, short on major chances. “We had a lot of possession; maybe we didn’t play it smart enough at times but its only this group’s second game together", said Fulton. "We do need to improve on how we kept the ball with two minutes to go. We made one mistake, a deflected corner and its 1-1."

Italy claimed the laurels from a goal-fest to move into second place in Pool A of the Hockey World League Round 2 in Stormont, seeing off a rugged challenge from Ukraine.

Andrii Koshelenko had given Ukraine the lead inside the first minute from a corner before Italy took control. Thomas Keenan whipped home a corner goal in the 13th minute to tie things up at 1-1 and they built a 3-1 lead by half-time with a couple of quick-fire goals.

Juan Montone got the second with a beautifully deft backhand shot at the left post to take the lead. Moments later, Luca da Gai was put through one-on-one and he smashed home first time.

France made it two wins from two with a composed 3-1 win over Poland, adding to their opening victory over Scotland on Saturday morning.

Victor Charlet’s drag flick to the roof of the goal got them on their way in the fifth minute and they held that lead into the first quarter break courtesy of Charles Masson’s goal-line save from a Polish corner.

Rafal Banaszak was kept busy in goal, making a couple of superb saves, before Blaise Rogeau deflected in a crash ball for a 2-0 lead. Rogeau saw another chance ping off the base of the post just after half-time before Etienne Tynevez fired wide when through one-on-one.

Seven seconds before the end of the third quarter, Tom Genestet put the result beyond doubt with an excellent backhand strike. Pawel Bratkowski got one back from the penalty spot as Poland pushed to get something from the game but France also had chances in a lively closing quarter.

Wales assured themseleves a top two spot in Pool B as they won a bonus point with a 4-2 shoot-out win after a draw against old rivals.

Normal time had ended 2-2 with Gareth Furlong scoring the equalising goal with eight minutes to go from a corner that thudded the backboard.

The rest of the scoring all came in the first 10 minutes as the game got off to a crackerjack start. Ed Greaves got a brilliant near post touch to a right wing cross to get Scotland in front in the fourth minute before Wales replied in kind when Ben Carless redirected a corner touch over goalkeeper Tommy Alexander.

Scotland went back in front, however, when Alan Forsyth’s old-school hit from the top of the circle hit the backboard for 2-1. He almost repeated the trick in the exact same manner before the end of the first quarter, hitting a foot on the line. His stroke, however, was brilliantly saved by David Kettle down low.

From there, the game raced from end to end, Scotland lying deep and playing on the counter, with Wales holding more of the ball. Corner chances came and went for both before Furlong nailed his drag-flick for 2-2. The Welsh prevailed in the shoot-out to add two points to their three for beating Poland on day one. Scotland are on one point.