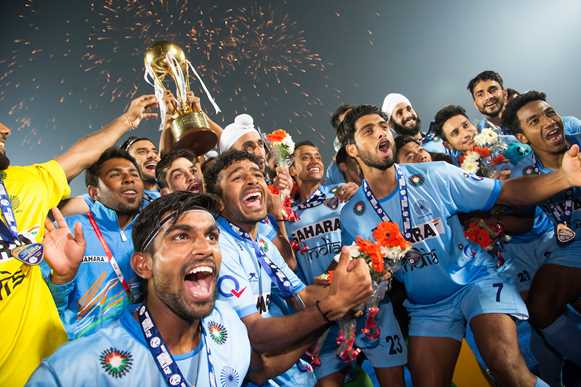 India have been crowned as the Uttar Pradesh Hockey Junior World Cup Men Lucknow 2016 champions following a 2-1 triumph over Belgium.

It was standing room only at the Major Dhyan Chand Hockey Stadium for the gold medal match, with 17000 cheering fans creating an electric atmosphere for what was a sparkling showcase of junior international hockey.

India were superb in the first half, harnessing the energy of the home crowd to move into a 2-0 lead. Man of the Match Gurjant Singh scored a sensational backhand strike from a tight angle in the eighth minute before Simranjeet Singh added a second 14 minutes later. Gregory Stockbroekx went agonizingly close to halving India’s lead with a penalty corner towards the end of the period, but his deflection travelled fractionally wide of the target.

Indian goalkeeper Vikas Diyas showed stunning reactions with a glove save inside the final five minutes to deny a vicious volley from Stockbroekx, a moment that proved crucial. Belgium scored an overtime penalty corner through Fabrice Van Bockrijck, but it was not enough to stop India from claiming their second junior world cup title, adding to the one they claimed at Hobart, Australia in 2001.

India’s triumph in the title match brought the curtain down on what has been a wonderful festival of hockey in Lucknow. With the new champions having a 100 percent win record throughout the event, few could dispute that the home favourites were worthy winners.

In the bronze medal match, Timm Herzbruch inspired Germany to a 3-0 victory over Australia, with the 19-year-old attacker scoring twice for his side. The early stages of the match were closely contested, with the Burras having some good scoring opportunities in the first half but found themselves going into break a goal down thanks to Jan Schiffer’s 11th minute field goal. It was a lead that Germany doubled in the second period when the outstanding Herzbruch fired home from open play in the 51st minute. Herzbruch – a nominee for the FIH Rising Star Award for 2016 - also netted Germany’s third goal, launching an unstoppable penalty corner drag-flick into the top right corner ten minutes from time to secure the bronze medal in front of a packed Major Dhyan Chand Hockey Stadium. “Obviously it is awesome [to win bronze], look at this crowd”, said Germany captain Constantin Staib immediately after the game. “It’s so loud in here, it’s unbelievable. I played in the World League in Raipur last year and it was similar, but not as much as here. It is the best experience I’ve ever had.”

Argentina were the winners of the 5/6 Place play-off, recording a 2-1 victory over Spain. Following an evenly contested first half, Spain came close to opening the scoring in the early stages of the second period, with Pol Gispert missing two glorious chances before Argentina established a 2-0 lead. Nicolas Keenan and Tomas Domene scored goals in the 51st and 54th minute to give the European side a mountain to climb. Spain removed their goalkeeper in the final stages of the match, and their boldness was rewarded three minutes from the end when Marc Perrellon pounced on a loose ball after Joan Tarres hit the post. Spain almost found an equalizer in the closing moments with a penalty corner, but Argentina shot-stopper Emiliano Bosso made the save that guaranteed a top five finish for his team.

The Netherlands were comfortable winners of the 7/8 Place play-off contest, defeating England 6-2. Remarkably, seven of the eight goals came in the second half, with Thijs van Dam’s first half penalty corner being added to shortly after the break as Thierry Brinkman made it 2-0 to the Netherlands. Tom Sorsby pulled a goal back before Bram van Groesen and Morris de Vilder increased the Dutch advantage to 4-1. England’s Will Calnan scored from the penalty spot to reduce the deficit, but additional strikes from Brinkman and Van Groesen both claimed their second goals of the match to complete the scoring.

Uttar Pradesh Up & Coming U19 Player of the Tournament: Timm Herzbruch (GER)