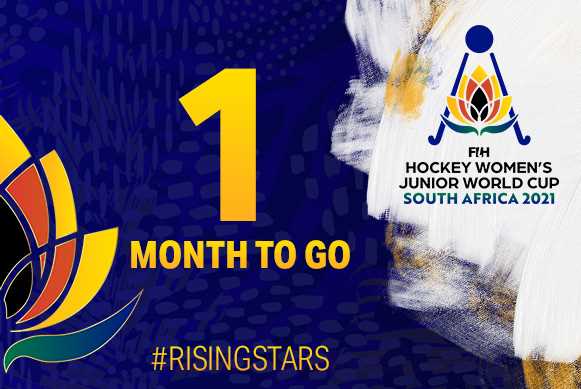 The FIH Hockey Women’s Junior World Cup, South Africa 2021 springs into action on 5 December. This will be a momentous occasion for hockey as it will be the first Hockey World Cup event to take place on African soil.

The 16 teams taking part will provide a first introduction for many of the future stars of the game as some of the best U21 athletes in the world will compete for the title. For others, who have competed this year at the Olympic Games Tokyo 2020, it is an opportunity to use that experience to guide their teams to the podium.

One such player is Spain’s Laura Barrios who earlier this month on the FIH Hockey Pod said: ‘In Tokyo I got very nervous ahead of the games and the senior players supported me. In South Africa, my role will change and I will be the one supporting the less experienced players.’

South Africa’s Onthatile Zulu has similar thoughts. ‘The responsibility to lead by example is a little bit overwhelming,' she says, speaking of her experience at the Olympic Games.

‘I have to be the best version of myself to help the other players. There were two of us at the Olympic Games who will now be at the World Cup and we experienced the highest calibre of hockey ever. We want to be playing at the highest level we possibly can as a junior side too and to showcase our skill set and our ability to play at that level.’

Barrios and Zulu will find themselves facing each other in the pool rounds as Spain and South Africa are in Pool D, along with Germany and USA. Of those teams, Germany has the strongest record at this event, with a gold (1989), silver (20050 and bronze (1993). Spain finished fourth at the most recent edition in 2016, while USA and South Africa have only managed a seventh and sixth place finish respectively. However, this is a very open pool this time around. South Africa have home advantage, while USA have the rising talents of Hope Rose and Charlotte de Vries – who shone at the Junior Pan American Championships – at their disposal.

Reigning champions Argentina are joined by India, Japan and Russia in Pool C. However, despite their strong record at this event, Las Leoncitas struggled to qualify for this event. They finished out of the medals at the Junior Pan American Championships and were handed a place at the Junior World Cup based on the ranking of their senior team following the withdrawal of Australia and New Zealand due to pandemic restrictions.

India will come to the event with the confidence inspired by their senior women’s team performance at the Olympic Games Tokyo 2020. The Junior Eves won bronze in 2013 and will hope to make the podium this time around.

Both India and Japan were nominated to compete at the Junior World Cup by the Asian Hockey Federation after the 2021 Junior Asia Cup was cancelled. This will be Japan’s second appearance at the event, and they will be hoping to build on the ninth place they achieved in 2016.

On their journey to Potchefstroom, Russia beat Ireland, France and Russia at the EuroHockey Junior Championships. These results will have given the team a real taste for success and expect match-winning performances from Svetlana Eroshina and captain Mariia Bordolimova.

With a two top place in the pools the only way to secure qualification through to the quarter-finals, each pool will be closely fought, and Pool B will certainly see some fiercely competitive matches. Belgium and England will both be hopeful of topping the pool but in Uruguay and Canada they will face two very tough encounters. Uruguay are debutants at this event but the hunger to make their country proud burns fiercely in the South American team.

And Canada come to Potchefstroom with confidence high after they won the junior Pan American Championships for the first time in their history. Both Pan Am teams have had a taste of making history and would like more of the same.

In all the Pools players will be experiencing playing teams they are not used to. talking to athletes, one of the joys of international competition is learning how to compete against different styles of play and to be immersed in different cultures. In Pool A, European teams the Netherlands and Ireland will face the very different style of play of Korea and Zimbabwe. For Ireland this is a huge step into the unknown but, says captain Caitlin Sherin, it is one the Irish team are looking forward to.

Korea have a great history at the Junior World Cup. They were gold medallists in 2001 and 2005 as well as winning silver in 1989 and bronze in 2009. Along with India and Japan, this time they were nominated by the Asian Hockey Federation and will want to grasp the opportunity to add to their medal tally.

The Netherlands team at Potchefstroom have the weight of history on their shoulders. The Dutch team have only failed to reach the podium on three occasions. They have gold medals from 1997, 2009 and 2013, along with a silver (2016) and bronze (2005). With their senior women’s side dominating world hockey at the moment, expect a strong showing from the junior Oranje.