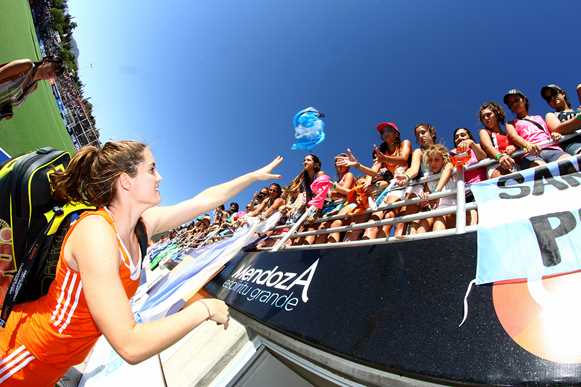 With 6.8 million impressions over the course of the Champions Trophy, Twitter has emerged as the number one way for fans to engage with hockey players and coaches, and both the 2014 men's and women's editions of the Champions Trophy saw our international sports stars tweeting their way through the competition.

Offering a snap-shot of life as an international hockey player, Twitter is also a fantastic way for players to share their thoughts, their humour, their frustrations, their happiness and their emotions with friends, family and fans. Here are some of the Twitter comments that were bouncing around during the Champions Trophy events in Mendoza and Bhubaneswar.

Sharing the love with India's star goalkeeper PR Sreejesh was teammate Rupinder Singh Pal: "Congratulations to our great wall of India @16Sreejesh on winning Best Goalkeeper of the Tournament award. Proud of u darling."

Meanwhile, Hockeyroos coach Adam Commens was delighted with the standard of competition in Mendoza: "The quality of hockey at the Champions Trophy has been immense. Great inspiration for all hockey fans and coaches, loved every minute of it."

One of the highlights of the men's competition was the return of Pakistan to the top level of hockey. The Green Sticks won silver, their best finish since 1998 – just losing out to the German team in the the final. Enthusiasm for the sport among the Pakistan fans is definitely on the up as Pakistan Hockey tweeted: "There is a huge demand for the hockey kit/shirt. Let's revive Pakistan hockey. It's so good to see both Pakistan and India hockey teams making a comeback at the highest level."

A more downbeat tweet was posted by Belgium's new coach Jerome Delmee. The Red Lions came to Bhubaneswar with high hopes of a top place finish, but ended up at the bottom of the table "Every match we have become better. We created more chances than our opponents, but we should have scored earlier. You do not win games with statistics."

Another coach who must have expected better of his team was the coach of the German women's team, Jamilon Mulders. But despite the disappointment of a seventh place finish, Mulders tweeted this upbeat message: "To develop a team you need time, passion and content. Decisions must be made by the players. #noego #hardworkpaysoff"

Lily Owsley is one of England's rising stars and she proved she knew what it takes to win when she tweeted: "Sometimes its pretty, sometimes its ugly, but a wins a win. Bring on the final game." Her words proved prescient as England beat aside a challenge from China to take fifth spot.

After a showing of clips from the forthcoming documentary of her life, Luciana Aymar was a little red-faced when she was shown hanging on the outside of a minibus with her colleagues, shaking the vehicle from side to side as they celebrated a win. "That needs to be edited," she said with a smile to the filmmaker. But her tweet to her colleagues was both poignant and heartfelt when she thanked them for the part they had played in making her retirement so special.

Speaking about the bronze statue of a female hockey player that is the Champions Trophy, coach to Las Leonas, Santiago Capurro, cheekily tweeted: "In the past six Champions Trophies, we have won five. She ( the statue) seems to like staying in Argentina."

And Mo Fuerste could barely suppress his excitement before the semi-final encounter against the Kookaburras: "Its game day in India. Semifinal vs @Kookaburras. Even live on television in Germany. Loooove knockout games."

Not every memorable comment from the Champions Trophy was posted via Twitter. Australia's manager and former Hockeyroo star Katie Starre was overheard telling a story about a stray dog that had adopted the Australian team as the players went for a run every morning. "Every time Mr Man (the dog) crosses the road, I hold my breath, because if the dog got squashed before a game that would not be a good omen."